Minnie’s Boys Is Old School Musical Of The Marx Brothers 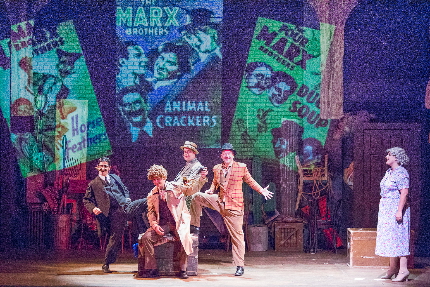 When Minnie’s Boys, a musical charting the genesis of The Marx Brothers, opened in 1970, the nature of mainstream Broadway musicals was changing. There still was No, No Nanette, but there also was Company.

Minnie’s Boys was a stubborn holdout, a light comic highly homogenized version of how stage mother Minnie Marx utzed, kvetched and kibbitzed her five sons to transform from a doomed vaudeville singing group to, well, The Marx Brothers.

Derelle Bunn, co-founder of Broward Stage Door Theatre, is  committed to preserving the classic American musical. Minnie’s Boys does not qualify as a well-known or critically-acclaimed piece. But she deserves thanks for giving a rare airing to a work that does capture the last gasps of certain kind of musical whose exclusive goal was to entertain, and did not aspire to much else.

The score by Larry Grossman has those peppy brass cakewalks with a couple of earnest ballads. Hal Hackaday’s lyrics range from moderately amusing to a cut above amateur hour. The pedestrian script credited to Arthur Marx (Groucho’s son) and Robert Fisher is a weak show biz fairy tale that elicits sufficient, even copious laughter when it steals directly from the Marx Brothers – transposing stage and film routines into supposedly accurate retellings of real experiences.

It’s the kind of innocuous show that flourished from the late 1950s through the late 1960s – and older audiences trying to escape the angst of 2017 may well welcome it with open eager arms. This isn’t and doesn’t mean to be Gypsy; Minnie is no Mama Rose. Director/stager Peter J. Loewy understands the vibe and guides the production in a consistent groove, although his choreography is a cut above everything else in the production.

The story opens with Minnie, her hapless tailor husband and their five boys ingeniously dodging threatened eviction for delinquent rent. The boys are always in trouble with authorities and Minnie tries to get them to create a singing act for vaudeville – the performance so terrible that plants in the Stage Door audience yell cat calls and throw fruit at them from the auditorium.

Over time, it becomes clear that the boys’ horsing around and ad libs are scoring better with audiences and they begin a checkered trek as they discover that their natural affinity for comedy is marketable.  By the end of the evening, the four brothers who stay in show business have developed their now famous personas and are about to write a full stage show at the Walnut Street Theatre in Philadelphia – their first major success as the institution we have come to know and love.

The initial production was deeply troubled with a fired director, choreographer and two previous bookwriters. It struggled through 64 previews and played only 80 performances due to an overmatched Shelly Winters in the lead and a career-making turn of Lewis J. Stadlen as the future Groucho.

The problems with the show have never been solved, starting with the fact that the one-dimensional Minnie played on Broadway by the demanding diva was really a dramaturgical distraction from the brothers’ drive to stardom.

As seen in the Stage Door production, the score is just as predictable and one-dimensional. The song titles say it all: “Be Happy” and “They Give Me Love.” The deserved standout is a lovely moving tribute that Harpo, ironically, sings to his mother, “Mama, A Rainbow,” given a fine rendition in this production by Michael C. Brown.

Melody Lieberman throws herself unreservedly into the role of the formidable Minnie and she has clarion voice to trumpet the score – far better than La Winters could have done.

Other than Jonathan Eisele as Julie (later Groucho) – slight wiry with black hair slicked down the middle, the boys are the most WASP-looking Jews of European stock you’ve ever seen. But all of them are engaging with fresh-faced looks, shining eyes and proud supple voice: Will Nash Broyles as the gambling addicted womanizer Leonard (later Chico), the aforementioned Brown as Adolph (later Harpo), RJ Magee as straight man Herbie (later Zeppo) and Steddy Amory as Milton (later Gummo who disappears for half the play without explanation).

Eisele has the scene-stealing role as Julie acquires more and more of the Groucho mannerisms including the banjo eyes and rubber legs. He slips smoothly into the persona on and off stage.

The cast’s strong voices carry much of the show, thanks in part to the leadership of musical director David Nagy working with superb brassy multi-leveled recorded music by Manny Schvartzman.

Ben Prayz plays their father, Sean Dorazio is their uncle who gives them breaks (as well as leads a chorus line in drag), Matthew Korinko has the thankless chameleon task portraying a host of secondary characters, and Ellie Pattison shares one of the funnier songs as the Margaret Dumont landlady who Julie woos while his brothers sneak their luggage out of the boarding house.

All these folks are giving what they can to the lackluster piece and the undeniably entertained audiences seem to be leaving the house happily trading stories about their favorite Marx Brothers film scene.