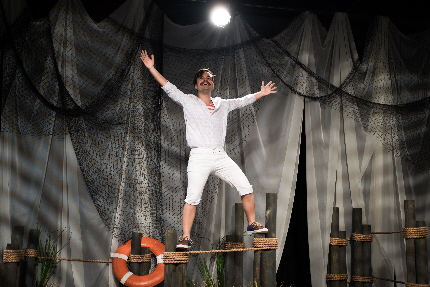 Merriment is a word we don’t use much in the 21st Century, but that is the precise adjective to reflect the madcap abandon, tireless physical comedy and unflagging enthusiasm that makes a success of New City Players’ edition of Twelfth Night.

Certainly, some of the younger cast members are better than others at navigating Shakespeare’s verbiage (although none are as ham-handed as most actors in a dozen local productions of the Bard’s work). But their energy, earnestness and endless farcical funny business deliver quite an entertaining evening.

A Shakespeare newbie sitting in the bleachers of the Vanguard Sanctuary on opening night turned to her companion at intermission and said with amazement, “This is funny!”

Indeed, this most ambitious production of the young company’s history benefits from a kinetic, ebullient approach established by director Jessica Schulte and executed by a troupe of rambunctious clowns who joust with oars and climb upon pier pilings. The poetry of Shakespeare’s verbiage takes a back seat to the spirit of fun that imbues the best Shakespeare comedies.

But unlike the earnest thespians populating so many disappointing local Shakespearean outings, this crew comfortably delivers most of the convoluted prose, making much if not all of the 400-year-old vocabulary comprehensible.

Dressed by Ash Joseph like carousing beachcombers and millennial tourists, the 12-member cast clambers around Ryan Maloney’s sun-kissed set of a copper-colored beach as likely found in the Keys as Illyria.

The classic story of a disguised heroine, mistaken identities and drunken ne’er do well nobility qualifies as one of Shakespeare’s funniest comedies underpinned by a wry melancholy at the fools that we mortals be when besotted by love.

The audience is thrust directly into the story sitting in 60-plus seats surrounding three sides of the cramped theatrical cockpit, but Schulte keeps everyone and everything not nailed down moving to dispel any sense of stasis or claustrophobia.

This won’t be among the most expertly executed versions you’ll see; there’s a good deal of overwrought scenery chewing. But the cast’s delight and comic imagination is irresistibly infectious. To wit, Feste’s Elizabethean lyrics are accompanied by an ukulele alongside a xylophone and bongos to the tune of “Wise men say only fools rush in….” 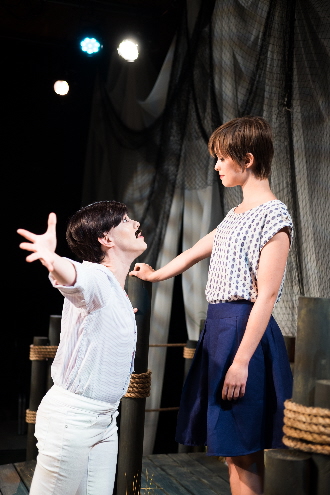 Schulte and Producing Artistic Director Tim Davis are blessed with mostly a fresh-faced cast – several just a bit out of college — plus a few more experienced hands. Erica Rose Dade, who has worked with Broward Stage Door, Slow Burn and Outré Theatre, is a delightful Viola trying to adjust to the bewildering behavior around her. Jenna VanWeelden made for a lovely royal debutante who cannot understand the disguised Viola’s reluctance to become lovers, Robert Fritz is the linchpin Orsino, Ernesto Gonzalez is the twin Sebastian, Nick Valdes is the buddy Antonio, Reggie Campbell as the sea captain, Johnny Contini as Fabian, and Ryan Maloney as the preening aristocratic fool Sir Andrew Aguecheek.

But special mention in reverse order is due Bree-Anna Obst as the ebullient beach bum Feste, Elizabeth Price as an especially animated and mischievous Maria the maid, and Johnbarry Green, last seen as King Arthur in MNM’s Spamalot, inhabiting Sir Toby Belch with all the deep satisfying gusto of, well, an aural gastro-eruption.

Leaving the best for last: One of the joys of the production is Kevin Reilley’s hilarious creation of the vain, supercilious, self-obsessed steward Malvolio. Reilley works steadily in part because of his craggy woebegone mien, but he’s rarely given a role that plays so perfectly into his thespian strengths. Besides secretly being the best in the cast at delivering the verse, here he delivers a comic gem that seems outrageous but is actually well-calibrated. As a character adrift in his ego and begging to have his nose tweaked, Reilley’s ecstatic reading of the forged love letter is the high point of the evening.

The core of New City Players is a group of friends from college and their relatives who almost no one has heard of locally, but who have been quietly ramping up their fledgling company with shows like The Glass Menagerie. This season, which began with Proof and will end with True West, has been staged in the summer not by a belief in year-round theater, but due to a dearth of small, inexpensive performing spaces in the region during high season.

The source script has been trimmed a bit, but New City Players’ Twelfth Night is a pleasant midsummer night’s dream.

Note: The company also sponsors City Speaks, a gathering at 7 p.m. on the last Thursday of every month at Switchbox Coffee, 3446 NE 12th Ave. in Oakland Park. The goal is to provide a venue “where people from our city share stories, speak truth, and listen to one another. The project’s aim is to give individuals an opportunity to share personal stories of humor, beauty, pain and change, provide a platform where individuals can speak truth to power, and create a space where our community can practice public civility and empathy through active listening.” 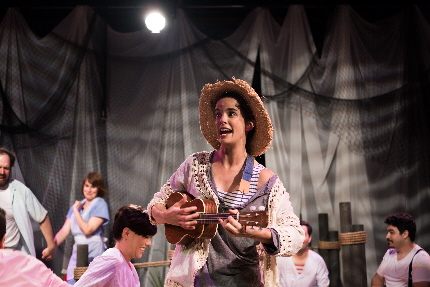