Most Happy Fella Among Best Sung Musicals Of The Season 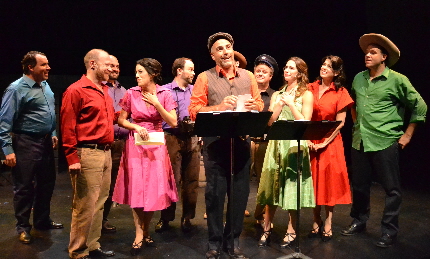 Over the past four decades or so, a huge section of humanity chastened by a thousand tiny and huge betrayals has grown a carbuncled cynicism for protection. A tragic victim is the embrace of emotion like joy, regret and even an unabashed ideal of true love.

So one benefit of revivals of Broadway musicals of the 1940s and 1950s is the reminder of how we used to feel about feelings – and to be chastised for having suppressed and dissed them in the modern world.

Nowhere in recent months has this been as clear as Palm Beach Dramaworks’ current staged concert of Frank Loesser’s 1956 musical The Most Happy Fella that overflows with a purity of emotions common to even the most ordinary of us, proclaiming them one of the glories of existence to be welcomed, not shied away from.

In that spirit, I’m going to dance way out on a limb and argue that this may well be the best sung musical in South Florida to date this season and possibly stretching back more than a couple of seasons.

The entire cast top to bottom envelops the audience with uniformly rich voices that not only deliver the score with skill and polish, but invest passion inside those notes and words.

That starts with the leads William Michals as an older Napa Valley wine grower and Jessica Hershberg as a young waitress who agrees to be his mail-order bride sight unseen in 1927. Both seamlessly meld the full and nimble operatic sound that Loesser intended and the musical theater/pop tune sensibility that Loesser was an expert in.

This is the fifth summer concert musical that Dramaworks has mounted in three years and each has been terrific, but this one directed again by Clive Cholerton with considerable musical direction by Howard Breitbart eclipses them all.
.
Certainly, it helps that Fella is blessed with a glorious romantic score by Loesser, better known for the urban sophistication of Guys and Dolls or the snarky satire of How To Succeed In Business Without Really Trying.

It is almost profligately infused with about 40 musical numbers plus recitative that led most observers in 1956 to deem it a kind of opera, although Loesser maintained it was a musical comedy “with a lotta music.” It was a form to become the default mode for Andrew Lloyd Webber as well as the French Les Miz team. In fact, the lead was originally played by opera star Robert Weede (later to appear in Milk and Honey) and in a revival by the Met’s baritone Giorgio Tozzi.

It encompasses solo arias, complex choral numbers, moving ballads, jaunty comedy numbers, show-stopping Broadway production numbers, all wrapped in an accessible American sensibility – nothing highbrow or hoity-toity here. It is melodious one moment, dissonant the next; heartfelt one moment, dryly witty the next. The work ran for more than 600 performances across 14 months initially, and has been revived occasionally, sometimes in concert versions like this one.

The source material is the 1924 Pulitzer Prize-winning play They Knew What They Wanted by Sidney Howard. Although the musical’s plot is simpler than the play’s narrative, it remains a somewhat complex soap opera given weight by Loesser and this cast’s unstinting underpinnings of genuine sentiment.

Italian immigrant Tony Esposito (Michals) spots a lovely young waitress (Hershberg) during a trip to San Francisco. Instead of a tip, he leaves behind a tiepin and a mash note written in broken English addressed to a name he has made up for her, Rosabella. The lovely but melancholy wounded soul tells her tart-talking colleague Cleo (Laura Hodos) that she doesn’t remember the guy. But the unexpected passion in his note touches her and spurs her to write him back as he asked.

Back in Napa, we see Tony is an ebullient and vibrant lifeforce in his community, but deeply lonely. After some correspondence, he proposes to the waitress. Rosabella, desperate for some security in the world, agrees. But Tony is reminded by his astringent sister Marie (Jeni Hacker) that is on the far side of middle aged, not terribly attractive and not the sharpest blade in the drawer. So Tony sends Rosabella a picture of “himself,” but it’s actually of photo of his genial strapping square-jawed foreman Joe (Jim Ballard) who is thinking of moving on soon.

The deception is immediately uncovered when she arrives, but she impulsively and pragmatically agrees to marry Tony because he has been badly injured in a traffic accident on his way to the train station to pick her up. Of course, the two young rootless people are attracted to each other and have a very brief fling.

Rosabella’s initially mild affection for Tony grows and deepens as she learns his true character, to the point that she eventually is completely in love with him. And then things get complicated in a test that keep this from being a dewy fairy tale.

Their considerable challenge is eventually conquered by the overwhelming power of true abiding love and forgiveness. It is precisely here that 21st Century audiences would scoff, but Loesser’s forthright conviction gives it a credibility.

But it would ring ludicrously false today if Cholerton, Breitbart and the cast did not commit equally to the material. And they do. 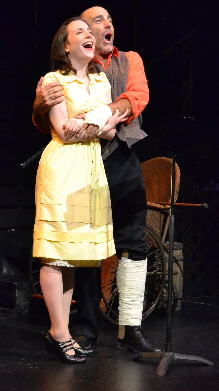 Back to the voices. New York actor Michals won a legion of local fans last season with his performance of Cervantes/Don Quixote in Dramaworks’ Man of La Mancha. But even then, he had not revealed this kind of bourbon-rich baritone that radiates Tony’s warmth and joy evident in his very first welcoming number, the title song. As an actor, he allows Tony to wear all of his emotions on his expressive face ranging from elation to agony. You cannot help but root for such an open-hearted creation.

Hershberg is his equal in every department. Taking a break as an understudy in the Broadway production of Cinderella, she not only has a crystal soprano but exudes a past that is never spelled out. Her Rosabella is sadly disappointed at life and desperately yearning for a little security if not happiness, as expressed in her first solo “Somebody, Somewhere.” And when she finds that happiness, she is as surprised as anyone that she finds it with Tony.

The two actors have adequate if not remarkable chemistry. That may grow with time, but their duets are stunning, especially “My Heart Is So Full Of You,” which should make most couples in the audience unconsciously grasp hands.

Ballard is such a dependable hand down here that audiences take him for granted. But his evocation of a decent man gripped by the siren call of wanderlust is superlative in the ballad, “Joey, Joey, Joey” – which also contain some of Loesser’s most poetic lyrics coming believably from the mouth of a ranchhand.

Hodos has a clarion Broadway musical voice and a wide acting range. But this wise-cracking hoydenish best friend is right in her wheelhouse and she just nails it to the wall with polish and precision. Shane Tanner is just as good as her beau Herman, a gregarious farmhand with an indefatigably positive outlook. He also leads the boys in the breakout enduring standard “Standing On The Corner (Watching All The Girls Go By).”

Loesser gave moments to shine to almost every role and this cast doesn’t let him down, including Hacker, Gabriel Zenone as a doctor, Ken Clement as a postman, and a trio of tenors interweaving their voices: Anthony Zoeller, Bill J. Adams and Roland Rusinek. The rest of the ensemble is filled out by similar talents including Matthew Korinko, Elizabeth Sackett, Stephanie White and Abby Perkins.

This is Breitbart’s first concert work at Dramaworks, but he and co-pianist Michael Ursua, musical director at The Wick Theatre, have mastered this score and deliver it with a smooth fervor. Brietbart’s work is evident in some of the complex vocal arrangements that Loesser created such as a quartet “How Beautiful The Days” with weaving lines as complex as Mozart.

Cholerton has once again led a masterful creative team, but we cannot gloss over the contributions of Sean Lawson. His sound design opening night was crystalline clear, but his triumph are evocative projections that inexpensively indicate a change of scene. Each set that he has created for each concert has been different. This one depicts small town streets and vineyard-covered hills in a thickly daubed style that seems a cross between Van Gogh, Monet and Pisarro.

The sole shortcoming is the same one we’ve noted in many staged concerts across the region. With very limited rehearsal time, artists struggle to negotiate the crucial hairpin turns of plot and emotion that often occur in a single sentence or a key change, undercutting their credibility or comprehensibility. Most productions stumble in this area (even those with extended rehearsal time) and this one is no exception. More time is needed for the actors to learn those curves and the director to lead them through the shoals. It may become the facet that audiences have to come to accept when they see a staged concert.

Still, this is easily the finest evening of musical theater Dramaworks has produced and a solid reason to drive a county or two to see it.