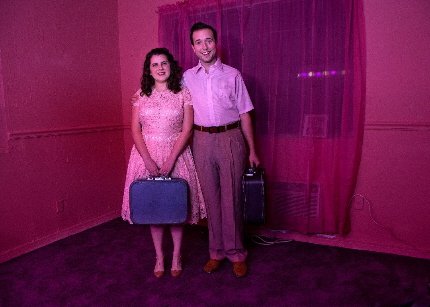 Don’t say we didn’t warn you: If you purchase a ticket to the fourth and latest iteration of Miami Motel Stories, you will be put to work. You may have to repair a costume, or apply an actor’s nail polish, or shine a pair of shoes.

In one segment, we are thrust into a roiling argument, in media res, between Cecilia and Ricardo (Hannah Ghelman and Mitch Lemos), undocumented Argentinean immigrants circa 1995. She’s a sex worker, he’s a jealous husband, and they’ve reached a point of fiery loggerheads. We discover they have children by observing the maelstrom of toys spread like debris across the floor and piling against the walls.

Which is where we come in. The conceit with this Miami Motel Stories is that a film crew has descended on a North Beach motel to film an ambitious tapestry about the melting pot of individuals that has, for generations, called this neighborhood home. The story of Cecilia and Ricardo is one of approximately 13 set pieces unspooling simultaneously on this star-crossed feature’s final day of rehearsals.

The crew is short-handed, so just as the actors double throughout this meta narrative—actors playing actors playing characters—we double as both spectators and a volunteer army ushered from room to room, wherever we’re needed. And so, while Cecilia and Ricardo engage in all manner of visceral passions, we’re gingerly stepping around them to complete our task: to retrieve all the Barbies and ponies from the couple’s floor, because Lenny, the film’s mercurial director (Alex Alvarez), doesn’t want them in the shot anymore.

The more rooms like this you enter, the more you get used to multitasking, and of being part of the show whether you like it or not. Juggerknot Theatre, which specializes in immersive experiences like this, is an appropriate moniker for a company that has bulldozed the third wall to rubble, blurring the distinctions between actor and character, and between character and audience. What’s remarkable about the Cecilia and Ricardo story in particular is that it goes deeper than even this narrative layer cake suggests, eventually touching on issues of consent in the post-#MeToo era, in which we are asked to silently take sides with either “Ghelman” or “Lemos” after the latter crosses an intimacy line. It’s about as uncomfortable a moment as I can recall in theatrical setting—which is very much a compliment. If you’re not shaken up, you’re not paying attention.

Reviewing Miami Motel Stories is tricky because of how disarming the experience is. Between these interactive micro-dramas and the interstitial, Altmanesque bustle linking them, it’s virtually impossible to remain a detached observer; moreover, we’re often on the move: My notes from Saturday’s opening night are mostly incoherent chicken scratch jotted in transit or in rare moments of sedentary calm, but if you look down for any reason, you will miss something. Furthermore, a comprehensive review would factor in the dozen-plus stories from all four separate but intertwined “tracks;” I only participated in two tracks, Orange and Pink, and even that took three and a half hours. To see the full show, you need to return for a second night.

Yet even with only half of the picture in focus, the mad-scientist ambition of co-directors Ana Margineanu and Tai Thompson is evident. Working from Juan C. Sanchez’s heavily researched and often poignant short plays, they’ve constructed an extraordinary mousetrap, a Rube Goldberg machine fusing the historical and the postmodern, the theatrical and the cinematic. Characters who are central to one track appear as ancillary characters in others. Noises from outside the paper-thin walls of the exquisitely run-down Ocean Terrace Hotel bleed into the rooms, just as they would during an actual motel stay. The sense of verisimilitude is so convincing that when actor JC Gutierrez, playing a gay bartender ca. 1991 who has a forbidden tryst with a closeted Hasidic man (Kevin Veloz), broke a bottle of “vodka” near my feet, and referred to this breakage numerous times throughout the play, I still don’t know if it was a prop malfunction or a scripted element. It became just another crisis with which the film crew had to deal; I half expected to be handed a broom and dustpan to sweep up the glass.

Other stories twinkling in this constellation of North Beach history include Robert Fritz and Amy Coker as Jewish honeymooners in 1956 who wrestle with the idea of relocating from New York to this balmy paradise full-time. Luckner Bruno plays Gibbs, a shoe repairman from the crew who explores the history of black Miami through footwear—and whose jubilant personality is infectious.

Maggie Maxwell dives deep into her self-reflexive performance as Mary, a deceptively cheerful Mammy caricature in the days of Jim Crow, who kneads dough for a pecan pie while spinning tales of segregated Overtown to her rich matron’s guests (i.e., us). Before you know it, Maxwell’s sunny monologue gets real, and functions as a moving metacritique of regressive typecasting.

Another solo piece, featuring Charles Sothers as Gianni Versace assassin Andrew Cunanan, is less effective, through no fault of the actor’s committed performance. It’s just that the character needs more time than 10 minutes to flesh out his mania and delusions of grandeur; it felt more like a rushed demo reel for a future full-length project than a self-sustained short.

Saving perhaps the best for last, Sandi Stock plays makeup artist April, the anchor of the “Pink” track. An actor herself who unsuccessfully auditioned for the North Beach movie, Stock’s April is a dervish of busyness and agitation, unloading her insecurities and aspirations on both the cast members she beautifies and us, her sympathetic volunteers and sounding boards. In preparing to dazzle the grumpy Lenny with a makeshift audition for a role that has just become available, April/Sandi impresses us with veritable sizzle reel of her gifts—monologue, jazz vocal, Broadway, rock, rap—until the talents she had been hiding under a bushel as a makeup artist are allowed to flourish.

Stock is also given one of the script’s most telling lines: “This is one big-ass experiment, and we are all guinea pigs.” The quip referred to the movie production within the play, but it also perfectly encapsulates the site-specific performance art-cum-short play festival-cum-Choose Your Own Adventure novel that is Miami Motel Stories. It was a singular pleasure to be in the rooms where it happened.