New Theatre’s My First, My Fist Is Sincere, Stylized Misfire 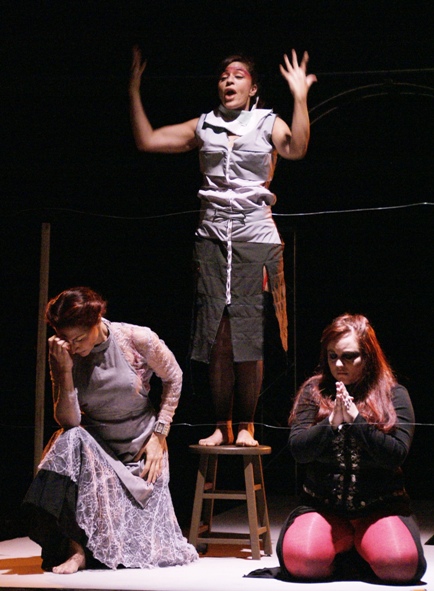 Before we go another phrase, let’s give props to New Theatre for persevering to mount the world premiere of My First, My Fist, My Bleeding Seeded Spirit even though its sets, costumes, sound and lights are locked up in their normal home at the Roxy Performing Arts Center due to a burst water main. They had to relocate to the Artistic Vibes space miles away in about day or so to bravely carry on.

Then, let’s give them credit for courageously undertaking a kind of highly stylized, impressionistic experiment rarely attempted by South Florida theaters.

And then let’s acknowledge that for a lot of audience members, this one included, that My First comes across as an overheated, self-indulgent, ham-handed, pretentious misfire that has nothing to do with the physical challenges of the emergency transfer.

It’s the artistic choices of Artistic Director Ricky J. Martinez and playwright Megan Breen, both of whom have invested their life’s blood in developing this decidedly uninhibited piece about the belated sexual liberation of three sisters whose late mother enforced upon them a soul-stifling repression.

Hardly the only problem, but emblematic, is that during the first hour of the 105-minute play, there are three artistically stylistic modes: loud, really loud and deafening with a lot of floor-pounding on a hollow floor and ear-splitting screeching. I mean for a solid hour. From the opening moments.

My First is an entry in New Theatre’s adventurous Boomfrog series designed to throw off the chains of naturalism and to explore theatrical boundaries, thereby attracting younger audiences and anyone seeking a more challenging experience. You cannot come with the same expectations as you have seeing your grandparent’s warhorses. But you cannot meet this play halfway; you have to go all the way to its doorstep and let it force itself down your throat.

There are even a few qualified virtues here including Martinez’s skill at staging the entire show as a kind of Martha Graham dance piece with vibrant movement, including a barely clothed but expressive representation of a young woman’s initiation into sex that looks like an X-rated edition of Cirque du Soleil acrobatics. That’s meant as a compliment.

It’s very difficult to evaluate Breen’s script because Martinez has directed the actors to deliver the lines with all the declamatory subtlety of a Greek chorus or a Hialeah construction crew swinging sledgehammers at each other. But she goes on way too long, having made her points over and over. Yet she has some incisively observed lines such as one daughter missing her mother’s presence, “Oh, I loved how she hated us,” or when a studious young girl says, “I want to become my favorite book to read.”

Breen piles poetically-inclined sexual metaphors upon sexual metaphors, jarringly interrupted by some comparatively banal vernacular. Unfortunately, when you can understand the words through the actresses’ inconsistent enunciation, many of them seem ludicrous. A sister aching for sex says, “My mouth is not thirsty,” then points to her vagina. “How do you drink down there?” Others make little sense such as, “My books will burn brightly in the mountains.” And there are such winners as “Cover your crotch with police tape.” I don’t feel comfortable repeating my favorite line even on this website that quotes obscenities in dialogue, but it involves a cactus and a woman’s private parts.

Point is: There is more to great art (well, most great art) than venting a cry of the heart. There is skill and craft to forge that cry into some kind of disciplined communication that can be comprehended even on some visceral level. Witness the work of the House Theatre of Chicago imported to the Arsht Center or Mad Cat Theatre’s best offerings. For instance, if not for the program notes and Martinez’s introduction, few in the audience would even have a clue that this play serves almost as an epilogue to Federico Garcia Lorca’s 1936 epic tragedy The House of Bernarda Alba, now inexplicably transported to the present and into the desert of New Mexico.

The premise is that three of the four adult Alba sisters (wasn’t there a fifth) are stuck in the desert after the recent death of their mother. But her spirit sticks around both in the repressive damage she did to their psyches and physically as a ghost (Evelyn Perez).

From the opening seconds, Magdalena (Nicole Quintana) is a nanosecond away from exploding with sexual energy. She spends a great deal of the play talking about her vagina and her needs in the most, shall we say, explicit terms. Strictly She (Susie Taylor) is the martinet so tightly wrapped that it will be about 75 minutes before she realizes her lesbian urges. The inexhaustibly petulant Martirio (Vanessa Thompson) just shrieks a lot. A fourth, Amelia (Francesca Toledo), has escaped to L.A. or Vegas where Toledo performs her like a stereotypical caricature.

Each of the virginal sisters eventually succumbs to their sexual urges. Magdalena has lusted from the first minute of the show for the coyote howling Carlos (the virile and dynamic Gabriel Bonilla who will have women and men alike feeling something). Strictly She is attracted to a high school senior (we hope she’s over 16) Stacy (Amber Lynn Benson in one of the few remotely on-target performances). Martirio is seduced in a more low-key way by a county road worker who fills pot holes (Kevin Coleman doing a sort of Chris Rock riff).

But other than Benson and Coleman’s work, the acting style is so far over the top that it is never engaging, compelling or moving.

For all the drama, Martinez and Breen admirably infuse the proceedings with a leavening humor. When the three sisters follow their mother’s coffin to the cemetery, they walk solemnly behind a tiny remote-controlled hearse.

Other bits were incomprehensible: Scene changes are marked with someone walking the perimeter of the stage in the round, spraying the audience with what I hope was scented water.

I’ll admit that after an hour, either I was beginning to get in sync with the Martinez/Breen groove or they had worn me down. But I began to get a glimpse of what they were trying to do.  I just don’t think they were doing it that well.

Hopefully, New Theatre and My First will be back home at the Roxy soon where the play will be enhanced by lighting (Artistic Vibes could only provide a few weak lighting elements), a system that can handle the doubtless sophisticated soundscape, the costumes, the sets etc.  But the problems that need to be addressed run far deeper.

Note: The actresses playing Magdalena and Amelia switch parts in different performances, which New Theatre hopes will make you come back a second time.

Another note: We’ll post on this site and on Facebook when the production returns to the Roxy.

New Theatre commissioned a promotional video that is not an excerpt from  the show, but it is well worth a look. To see it, click here.

3 Responses to New Theatre’s My First, My Fist Is Sincere, Stylized Misfire