Not the Retelling of the Elian Saga You Might Expect

Posted on November 2, 2022 by Bill Hirschman 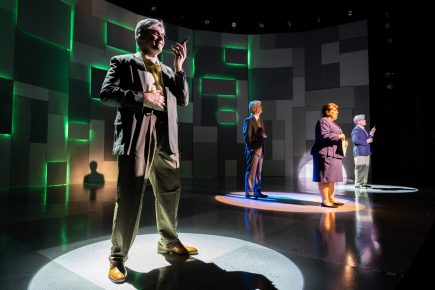 Trust us: The world premiere drama Elián at Miami New Drama is not remotely what you expect.

First, outside of a couple of cries offstage, a toy truck rolled across the stage and the famous photo of the boy terrified by the armed border patrol agent, Elián does not appear in Elián.

That’s reasonable because Elián is not really about Elián. It’s about the political, social and moral firestorm fueled by ego, pride and bureaucracy that created one of the community-defining incidents in Cuban-American history.

Second on the list of what you would not expect: This lacerating indictment of manipulators, users and politicians is intentionally comical, rife with sex jokes, one-liners, cutting satire, a Muppet-looking puppet playing Castro, and caricatured characters who might be found in a cartoon. For example, Attorney General Janet Reno is introduced wildly rolling her squarish body to dance music and waving her butt in the face of the narrator. The actor playing President Bill Clinton concludes his every scene pulling up his pants zipper.

Yet, underneath the circus staged by director Michel Hausmann, Rogelio Martinez’s play recognizes the dramatic collision of culture, politics, passion and the value of family. It respects a multi-level tragedy whose lasting legacy was to unite a somewhat disjointed Cuban-American community to the point of possibly being responsible for derailing Al Gore’s run for the presidency.

Martinez gives Jorge Mas Santos, the head of the Cuban American National Foundation, a telling postscript speech: “Every year on December 31st we raise our cups and toast. Next year in La Habana. When I was little my father used to say, ‘Close your eyes, Jorgito, and listen. It’s coming from every house around us. Next year in La Habana.’ Each new year I hear it less and less until this year. This year I listened and there were thousands of houses all saying, ‘Next year in La Habana.’ Elián has brought us together. A community in fragments is now united.”

Martinez and Hausmann interviewed of some of the players to more deeply investigate what is the commonly accepted narrative. But for all the advertising claims that this work has unearthed information and its obvious commitment to a fresh depiction, nothing new factually leaps from the stage. Martinez’s script makes no bones about it: “With all that knowledge, I was able to set my imagination free. What follows is a work of fiction.”

Indeed, there is an inherent fairness in the work you might not expect with such a controversial incident that remains painful, emotionally charged and divisive for so many people two decades later. Certainly, conspiracy theories are aired, but they are not presented as fact, just the fact that some people propose them.

For all the humor, the play has razor-sharp observations about blame, human failings and even the character of the community. An entire section not in the rehearsal script but added later for production talks about how virtually none of the players was interested in, even cognizant of the possibility of rational compromise. One observer quips that it’s apparently not a word in the Cuban dictionary.

Of course, the entire evening is dotted with dead serious stories about Castro’s atrocities and political murders. But the audience at Sunday’s matinee chortled at the copious humor infused in the script and Hausmann’s vision for this production.

Both men have also embraced a theatricality that encompasses most of the characters talking directly to the audience explaining their inner thoughts, as well as a dozen meta moments.

For instance, Manny Diaz, the family lawyer, is referring to the character of Roger Stone (more on him later). He tells the audience as Act Two opens post-intermission, “I’m glad I have a chance to take over for a moment. Roger is still in the bathroom. He has a terrible condition known as diarrhea of the mouth. It’s the kind of condition that lands people in jail. If I were his attorney, I’d advise him to get out of this play and try to go make money somewhere else.”

For those who lived here at the time, it’s hard to realize that it was 23 years ago when the five-year-old and his mother joined a group of 14 who escaped Cardenas, Cuba in a small boat. But on Nov. 25, he was found in an inner tube floating off Fort Lauderdale. Only two others were found alive; the rest including his mother drowned when the craft overturned.

The boy was taken into relatives’ home in Little Havana, which became a symbolic gathering point of exiles. Then Castro said the boy should be returned to his father still living in Cuba. The Cuban exile community erupted in protest. It became an issue of freedom or family.

When his father came to Washington, D.C., with a potential custody hearing on tap, armed federal agents raided the Miami home in the wee hours of April 22 and took the boy away. Following complex legal battles (none of which are in the play), Elián and his father eventually returned to Cuba where he graduated from college and began a family (also not in the play).

The company of nine actors – each playing multiple roles that can change off-stage in a matter of seconds – are simply amazing as they dive deep into each character no matter how different one is from the other that they are assigned to play.

As an example of the actors’ versatility, Mendez also manipulates and voices the puppet Castro who strokes his beard and waves an arm holding a cigar. 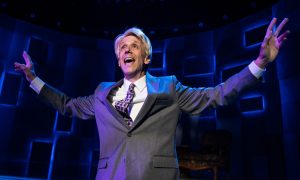 But at the center of the story and the production is Mike Iveson as the story’s narrator, the bottomlessly smarmy, slick manipulator Roger Stone. Yes, that Roger Stone, who at the time was in political exile in his home town and looking for ways to resurrect his political power by galvanizing the Cuban community.

Iveson’s Stone is simultaneously hilarious and obscenely conscienceless with that endless grin of cynicism endemic to those certain they know the way the world works and how to take advantage of it.

As usual, Miami New Drama spares nothing on the visual and aural elements: Christopher Vergara’s costumes, Kirk Baran-Bookman’s lighting, Yana Biryukova’s projections that help set time place and environment, Salomon Larner’s sound, and Christopher and Justin Swader’s scenic design – a huge cyclorama with seamlessly concealed doors and windows. Other than the Swaders, who are New York-based but have done considerable work for Miami New Drama, and Bookman who works at Palm, Beach Dramaworks, most have little or no prior connection to South Florida theater productions.

As succeeding generations of Cuban-Americans are born in America, they honor their homeland, but many don’t harbor the same level of fury, the same sense of betrayal, the same painful longing of their parents and grandparents.

This play helps fill that gap. As Ninoska says, in one of her few telling observations, “Young people have to be reminded what it is we’re fighting for. This is their wake-up call. Now they understand their parents’ anger.”