Uncertainty is the Desired Hallmark in Heisenberg 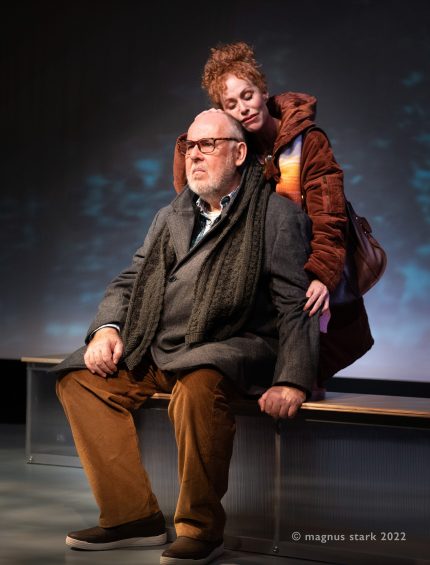 There is a delightful irony to Heisenberg, GableStage’s enthralling play that is partly about uncertainty: When you leave it, you’re not quite sure what it was really about. The reward is you can debate it in the car ride home, mull it over as you go to sleep and theorize about it the next morning.

About the only thing you can be really sure of is, if you’re willing to open yourself, you have had an engrossing night of thought-provoking, challenging theater.

Definitely, no one requiring a conventional tale is going to walk away satisfied with a play tracking two unusual people in a complex, off-beat relationship that starts weirdly and ends in a unique place that doesn’t settle into a cleanly happy ever after ending. Indeed, the production’s stated requirement that each patron provide their individual interpretation, rather than being handed a clearly defined theme, may be more than some people seek. That’s their loss.

Regardless, highest praise is due this quadruple tour de force for actors Margery Lowe and Colin McPhillamy, director Bari Newport and the choreographer in this movement intensive show, Jeni Hacker. If you look at the script by Simon Stephens (The Curious Incident of the Dog in the Night-time), it’s 99 percent dialogue. The characterizations, the staging, the visuals, the sound, everything comes from the imagination, skill and downright creative courage of these four and their creative staff.

Recounting the outline of the premise (we can’t go too far without spoiling anything) does not do justice to what will happen as the play opens inside a London tube stop. Georgie Burns, a 40-ish New Jersey ex-pat with long red hair and a nuclear power plant bursting inside, comes up behind the seated Alex Priest, a seemingly stolid 75-year-old butcher – and kisses him on the back of the neck.

This ball of fire tells the startled Everyman that she thought he was her husband, although seconds later she acknowledges that her husband died 18 months ago. If this makes little sense, it’s nothing compared to what’s coming.

Unasked or not even necessarily welcome, she buries him and the audience in a non-stop torrent of words, ideas, frequent F-bombs, giggles and questions or comments that are completely inappropriate when interacting with strangers – although she will keep this up for most of the play.

Something is driving her and there is something else barely detectable inside Alex, so the play can be seen partly as a mystery.

The play traces the pair’s evolving relationship over several weeks in which secrets are unveiled, vulnerabilities are bared and both share depths and complexities the audience will not initially expect. (You have to love that costume designer Camilla Haith provided that when Alex takes off his button-down shirt, underneath is an old, faded Pink Floyd T-shirt.)

Stephens, in theory, has tried to link the play to theories of German physicist Werner Heisenberg (Yes, the “nom de crime” that Walter White borrowed). He held that observers cannot accurately know the position and speed of a particle; the more we nail down, the less we know about it.  Indeed, as I remember from high school physics, the very act of observation itself makes the particle’s path and speed different than if it wasn’t being observed at all. But truth be told, none of that comes clear in the script let alone the production.

More discernable, GableStage does what it can to make that connection in its Playbill – which is well worth reading before the lights go down – including a quote from a New York Times article that restates, “a pair of particles once associated would be eternally connected, even if they were light-years apart.”

Lowe, Newport and Hacker have created an amazing kinetic creature in Georgie. Effusive does not cover it. She is an indefatigable force of nature without any censoring device in what she does and say, like a heedless tornado in which debris flies out of the vortex threatening to hit anyone.

In addition to the verbiage, Georgie’s whirling dervish body is always in motion, limbs flying, fingers outstretched, leaning over, legs splayed then knees pulled in to each other.

But Simon and Newport have Lowe’s mien, intent and emotions perpetually changing in tight acute angle turns. Lowe’s ability to navigate and clearly communicate this ever-twisting emotional and intellectual landscape is breathtaking. It is almost impossible to believe that this is the same veteran award-winning actress who played Emily Dickinson in Palm Beach Dramaworks’ The Belle of Amherst last season.

McPhillamy, who works on Broadway and often at Dramaworks, gifts a masterful performance as he slowly reveals Alex’s own quirkiness.  We initially think he’s a shy withdrawn prole, but we find there are facets you’d never attribute to a stereotype. He is especially effective in the opening scenes as Georgie inundates Alex. First, he seems befuddled, but at the same time it’s clear Alex is listening – one of the more difficult tasks for any actor trying to remember their next line. With his high-pitched scratchy voice, Alex embodies that time is fleeting.

Newport has not simply helped carve these portraits but has paced the evening, especially creating moments in which the play breathes. Georgie slows to nurse a buried pain and Alex steadily unpacks his past. It’s not just what Stephens has the character say, but how Newport arranges the space between what is said. Alex advising Georgie how to listen to a piece by Bach, says, “That’s the secret that nobody knows about music. Music doesn’t exist in the notes. It exists in the space between the notes.”

Scenic designer Frank J. Oliva has put a large thick blue arch and industrial light fixtures over the bare stage, which has metal and plastic boxes that double as a benches, tables and the like. Tony Galaska has changed location and mood with subtle lighting changes. Alessandra Cronin and Steve Covey add projected images and location titles on a back wall. Sean McGinley has provided urban noises and less recognizable environmental sounds.

A nod to Sammy Heroux serving as dramaturg, a post not very common down here.

Again, this production, especially Lowe’s performance, took a lot of guts to create something this vibrant, this unconventional and this uncertain. But grant that what you see on stage here is precisely what everyone involved wanted to. How you react is your decision.

(Note: As it did last year, GableStage is streaming the performances for paying customers who don’t want to come to the theater.)