‘Thin Place’ Explores a Conduit ‘Tween the Living & the Dead

Posted on November 5, 2022 by Bill Hirschman 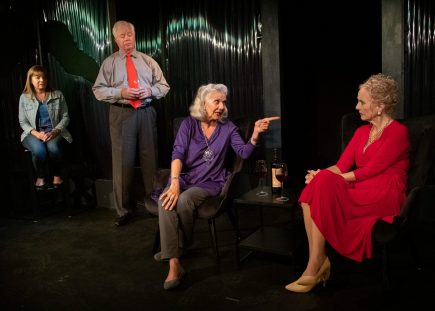 The hard truth is that virtually no live theater is really chilling. A moment might make you jump, but a production likely will not haunt you. Okay, the long-running London production of The Woman in Black. The New Theatre production of Turn of the Screw here in 1998. Some people might toss in the last tale in The Weir. That’s about it.

This is not a horror story, but a quiet, slowly building tale about death, relationships and the possibility of things just a shade past what we are sure of in the “real world.” As with best of the genre, it doesn’t overtly try to terrify you, other than a few fun house shocks like Wait Until Dark.

It starts over a cup of tea with the warm, smiling middle-aged Hilda sharing with we visitors some recollections about her recent past and her childhood. She’s an affable soul albeit with the slightest undervibe of something indefinable, like someone who has survived “something.”

Her first story describes how, as a child, she and her grandmother toyed with trying to communicate with their minds, not telepathy but something arising out of their bond — in case they want to speak after the old woman dies. Soon after, Grandma is tossed out of the house by Hilda’s disturbed mother and dies.

Hilda tells us with self-deprecating bemusement at her subsequent discovery, “But you know, the thing about these little games I played with my grandmother…. they sort of opened up a door for me a door to this “other place,” this — I don’t know what to call it — this… thin place. This place where the line between this world and some other world is very thin.”

Then she relates how last year she met Linda, a spiritualist/medium from working class England, who holds sittings, mostly with wealthy American clients. We get to watch Linda conduct a low-key séance connecting Hilda with the spirit of her grandmother. It’s crucial that during these sessions Linda doesn’t boast supernatural powers or even quite understand how she does what she does. She’s almost blasé about it like a craftsman with a talent he never asked for.

But the two women quickly form a genuine friendship, although Hilda quietly hopes, but never gets Linda to contact her mother, also now dead.

It’s very difficult to go too much further without spoiling anything. But during their off-duty talks, Linda says she feels she is just providing a comforting service to the grieving as much by telling people what they want to believe as she is hearing voices from the beyond. She admits to Hilda that much of it is intuitive insightful guessing augmented by the anxious willing belief of the client. “It’s a lot like psychotherapy — except what I do actually works.” She never quite discounts 100 percent of the “otherness” inspiring those guesses, but she certainly sees it in a clear-eyed way rather than something occult.

But Hilda needs to believe; she needs to reconnect with her grandmother, and she has a major issue with her dead mother that she yearns to resolve. Indeed, she independently believes an intimation that there is that “other place” behind this thin place of potential communication that she senses is  “like if you were to imagine an octopus in an aquarium pressed up against glass, … except that there’s no glass and no octopus.”

Hilda’s story continues at a posh wine-lubricated party with Linda’s fiscal supporter Sylvia, who is beginning to have her doubts, and Jerry, a political consultant who has hired Linda to coach his candidate how to discover what people want to believe. (Ouch!) Hilda is the outsider in the trio until…. Well, she has one more story to unreel.

Throughout this push and pull, and a considerable humor threaded in the darkness, Hnath wants you to consider that maybe, just maybe, there is something out there that even Linda doesn’t realize. Or not.

And it culminates in a chilling scene that simply should not work in live theater, but does here because of the alchemical talents of the actors and director Keith Garsson’s melding of the work of set, sound and light designers that has subtly coalesced during the evening.

Start with Boca Stage’s ever dependable unofficial repertory company of veteran actors. Jacqueline Laggy makes Hilda an infinitely engaging person you’d like to have as a friend, one whose calm, pleasant demeanor barely camouflages deep nagging needs. Both Laggy and Hilda are astute listeners, seeking encouraging signs in what is being said around her.

Lourelene Snedeker, a four-time Carbonell winner, adds another unique character to a resume that includes the tour de force as a woman who identified other Jews to the Nazis in Blonde Poison. Here, she adopts an Irish-Anglo working-class accent and a decidedly practical attitude as Linda. While delivering messages from beyond, she exudes just enough of that faux mysticism needed to ice the cake without going overboard. But the rest of the time, she’s just someone you’d meet at a party.

Kim Ostrenko, who gave one of the finest performances of the entire last season in The Sound Inside, captures Sylvia’s divided sense of wanting to believe and beginning to doubt. Steve Carroll is the kind of businessman you run into at the county GOP gathering at the country club.

It helps immensely that Boca Stage is housed in a narrow strip shopping center storefront, so people in the back row are about ten feet from the actors. This intimacy is a huge asset because Laggy and Snedeker’s mobile expressive faces telegraph inner thoughts, a flash of hope, a moment of the crestfallen with just a twitch of a lip or a raised eyebrow.

Garsson has carefully paced the evening and molded the interplay of performances. But he has also melded the design team’s efforts — impressive for a company with a tiny budget and a performing space shallower than your bedroom. Ardean Landuis creates the eerie physical environment and amazingly supple lighting: two comfortable chairs side by side backed by walls of vertically corrugated plastic, ripped open by some force, and lit by what seemed to be otherworldly waves of colored light. David Hart supplies a soundscape of everyday sounds and unique noises that are nothing like what you expect in a ghost story.

Hnath has graduated from the new fresh young talent to an accomplished playwright with an enviable track record of award-winning plays, none of which are anything like each other. Several have been done locally such as The Christians, A Public Reading of an Unproduced Screenplay About the Death of Walt Disney, A Doll’s House Part 2 (which will be done once again in February at GableStage) and Red Speedo (to open later this year at Ronnie Larsen Presents).

You won’t have trouble sleeping after seeing The Thin Place, but there may be an eerie caul over your thoughts for hours afterward.