Nothing is Simple in Boca Stage’s Thought-Provoking Luna Gale 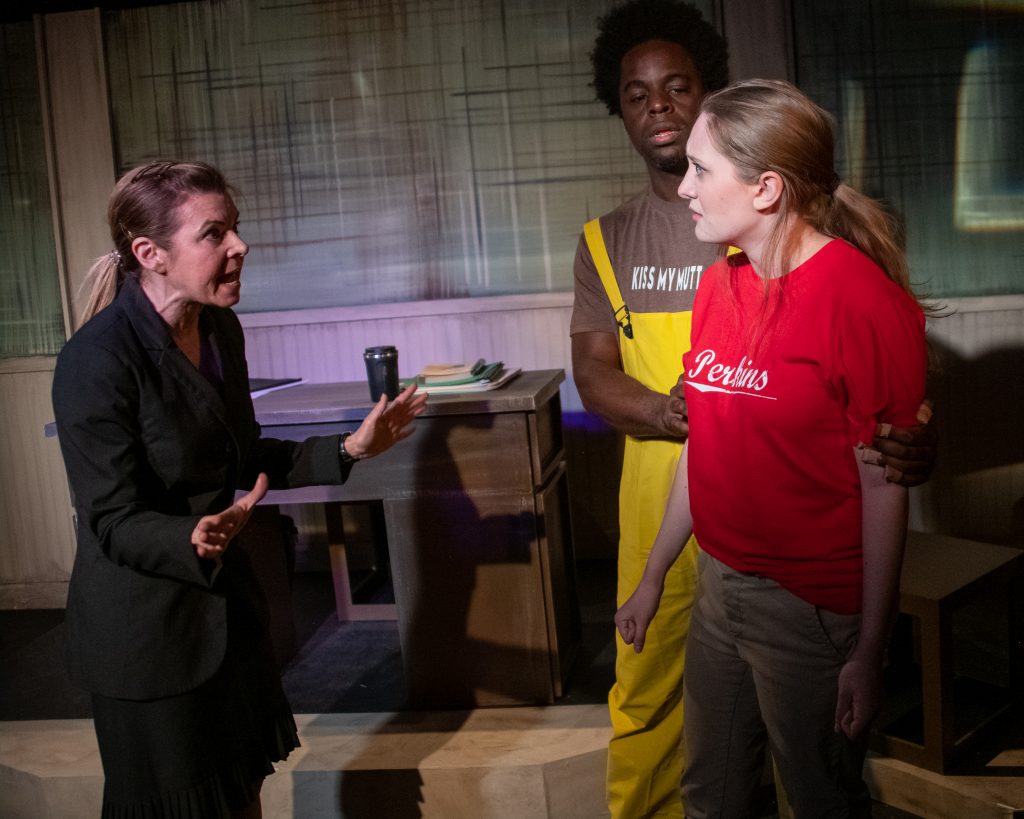 Social worker Jacqueline Laggy argues about the fate of a child with meth-head parents Jason Pierre and Abby Wolf in Luna Gale at Boca Stage. / Photos by Amy Pasquantonio

In deciding the Bible’s legendary custody battle over who was the real mother of a mewling infant, King Solomon had it easy. Someone was lying, someone was telling the truth.

But social workers struggling in cash-strapped resource-deprived state health and human services departments face tragedies daily in which there may be no truly satisfying solutions and in which all the warring parties truly want “what’s best for the child.”

Those dilemmas echo larger questions facing everyone in which we all seek to choose the best path in a real world of complexity and limited options. What would we do in such circumstances and how far would we stretch our professional ethics to do what we know is “the right thing” — laws and policies be damned?

Such is the core of Rebecca Gilman’s Luna Gale whose script virtually defines the “a thought-provoking play,” now receiving an engrossing production from Boca Stage (formerly Primal Forces) which specializes in precisely this kind of work.

The set up seems simple at first: The titular six-month-old child of a couple of unmarried zonked out meth-heads Karlie and Peter has been rescued by an Iowa child protective services department when she comes to a hospital with severe diarrhea and dehydration.

Karlie’s mother, Cindy, is a divorced but steadily employed nurse’s aide who wants to care for the child temporarily but eventually seeks full custody.

Caroline is a 25-year veteran social worker whose recommendation will likely influence a court decision on Luna’s fate. Caroline, trying to be impartial, wants to see if the couple can rehabilitate themselves and keep custody of Luna, yet she recognizes that Cindy’s seemingly provides a safe dependable haven long-term.

But nothing is that simple. None of the players, including Caroline, are that simple. Several secrets and an Act One-ending surprise turn the plot and the audience’s perceptions inside out more than once. To give away much else would be spoil an incisive exploration of the intersection of inefficient bureaucracy, compassion, past-influenced prejudices and human frailty. But suffice it to say that Caroline finds herself in the kind of moral quandary that the hero detective faced in the closing scenes of Dennis Lehane’s novel and film, Gone Baby Gone.

Complicating matters is Cliff, Caroline’s newly-appointed supervisor and a bonafide bureaucratic jerk who wants the case disposed of quickly so Caroline can get on to the other 90 cases on her desk; Pastor Jay, Cindy’s spiritual advisor, and Lourdes, an 18-year-old whose inspiring graduation with honors from various reclamation programs depicts a possibility of hope.

Gilman, whose extensive catalog work include Boy Gets Girl seen at GableStage in 2001, sets up situations and personalities that are painfully accurate in their complexity. Every person in this journey, including the heroine, has flaws and virtues. Every person has initially hidden backstories, leading us to reevaluate almost everyone at some point with levelling compassion and suspicion.

Artistic Director/Founder Keith Garsson keeps the staging simple on Boca Stage’s shallow stage in an intimate venue where patrons may be less than six feet away from where emotions clearly play across the characters’ faces. But he drives his actors to make these human beings all too recognizable as faces across the dining room table or last seen in the mirror.

Unconstrained praise is owed to Jacqueline Laggy, who would be a member of the company’s repertory cast if Boca Stage had one. Once again, she creates a character whose exterior – calm, intelligent, selfless — almost but doesn’t quite conceal a more complex interior that emerges slowly scene by scene. When her character suddenly commits to a course you would not expect, Laggy makes the choice credible as the act ending lights go dark even before you find out after intermission why Caroline would do such a thing.

Abby Wolf plays the confused, unrepentant woebegone Karlie as someone as frightened of herself as of her past. She and Garsson have chosen to have Karlie on the edge of falling apart, eyes nearly bulging, moaning voice strained – bordering on a cartoon yet still believable as someone who no longer believes a future exists because what she has seen in the past.

Jason Pierre’s Peter starts out as drug-blasted as Karlie while clearly loving her and Luna. But Pierre makes Peter’s evolution credible as the custody case twists and turns.

Annya Bright has the toughest role as Cindy whose deep faith in Christianity as a life preserver will be seen in different ways by different audience members.

Randall Swinton makes Cliff the kind of boss you hate – driven by ambition to make decisions solely for political reason – or so it seems. Marlo Rodriquez makes Lourdes’s journey depicted in two stages completely. Brian Edgecomb’s genial Pastor Jay is as imposing as his physical bulk, but he, too, can be interpreted sincere and simultaneously as someone with a larger agenda

Luna Gale sometimes resembles a Law & Order episode ripped from the headlines, but as you kick it around the drive home, you’ll discover that the issues – especially the central moral choice made by Caroline – have a much broader and universal applicability to decisions in your own life.