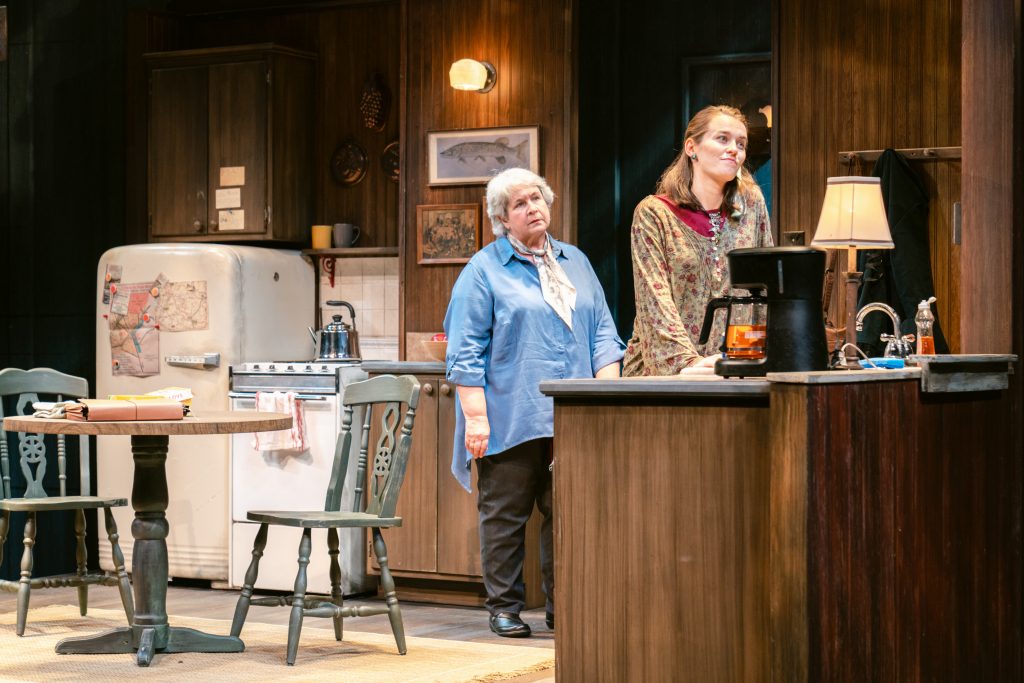 Bruce Graham’s world premiere The Duration developed at Palm Beach Dramaworks is an intellectually and emotionally powerful drama rooted deep in a post 9/11 world, but also in a timeless inquiry into how human beings cope with limitless tragedy.

The play unflinchingly asks deeply penetrating questions about who we are – and the answers suggest upsetting revelations about humanity dealing with catastrophe through grief, prejudice, fear and anger.

In particular, can that fear and anger propel us to say, think and do things we never thought we would be capable of saying, thinking or doing? Other people, sure, but not us.

Although set very specifically in the immediate aftermath of the 9/11 nightmare, Graham’s story is made universal by focusing on a family as recognizable as your next-door neighbor – or yourself. And the questions inescapably resonate with events as fresh as those last week.

Audrey Batten is a 50-something astute historian and feisty educator whose son was killed in the Twin Towers perhaps a month or two before the lights rise, and whose husband was killed by a drunk driver about a year before. Daughter Emma, the son’s twin, is a poet. Both are struggling with the loss in markedly different ways.

Audrey has simply and literally walked away from her job teaching in a Catholic school; she has retreated to a cabin in Pennsylvania’s Pocono Mountains. Emma is attending a weekly support group in Newark where she argues bitterly with some attendees. She buries herself in routine because “the last thing – the very last thing I want at this point in history – is time to think.”

Emma is extremely worried by weekly visits to the cabin that her mother, a suck-it-up stoic, is beginning to fray. Workaholic Audrey has abandoned the latest historical tome she had been researching. She won’t mention the name of her dead son. She has begun collecting everything she can about the tragedy toward a goal we don’t see for some time, and perhaps she doesn’t either. She blithely tries out a gun for her first-time target practice “because nobody knows what’s going on anymore, Emma. Where is it safe, huh? A classroom?”

Above all, for someone who has based her life on facts, she is obsessed with a desperate need to find answers that provide a rational explanation for a world in which meaning and order and stability have vanished. The terror that such answers don’t exist have driven her and are driving her to dark places she doesn’t want to admit.

And most upsetting, she cites a key moment when she was close to indulging in unthinking violence in retaliation. Audrey says, “I…I… I mean, this… this goes against everything I personally… thought I believed. Key word ‘thought.’ Everything I tried to teach my students, teach my own kids. Am I a hypocrite, a closet racist? I don’t know. I just know it’s wrong… some of the things I’m thinking now.”

Emma understands – with an asterisk. “I’m angry, too! I want these people punished. I just want to make sure the right people get punished and not just a blanket open season on certain people….”

As an example, in her support meeting, she cites compassion for an innocent man murdered in Arizona because he looked like a Muslim. “However, if I voiced that opinion in the middle of a crowd, there are folks who’d call me a traitor. How long’s this gonna’ last? Twenty years from now will xenophobia still be all the rage because once we open that door – once a generation or two accepts it, it’s open season. Arabs for a couple years then who knows. Jews. Hispanics. Canadians. I honestly believe that this country reacts to things like a four-year old throwing a tantrum.”

In a slow building arc, the women and Audrey’s close friend Douglas struggle to find some homeostasis – not a “solution” but a qualified separate peace that will allow them to continue with the rest of their lives.

Simply describing this set up and even the ideas flowing back and forth is woefully insufficient to communicate the complexity and profundity of Graham’s drama. All these words and phrases are just phrases and words; the actors and director make them blood and flesh.

Grounding the journey is director J. Barry Lewis’ detailed leadership through the complex corridors of grief. But above all, we must honor an outstanding performance by Elizabeth Dimon as Audrey. Dimon is simply one of the best actresses in the region who, as she did in Dramaworks’ Spitfire Grill, once again does not create a character; she simply becomes a real person mourning loss. She exudes Audrey’s feistiness and intelligence with a wry smile and sparkle in the eye. But she also emits the distinct sense that something is wrong from the moment she walks into the cabin for the first time.

She is well supported by Caitlin Duffy as the deeply troubled Emma simultaneously coping with past issues with her mother, and Dramaworks’ veteran John Leonard Thompson is Audrey’s friend, a priest and teaching colleague beginning to feel that teaching in the safe zone of a college is not a morally satisfying option.

Graham already gifted local audiences in 2018 with the stunning play White Guy on the Bus for GableStage, an incisive look at race relations. Like that outing, this one is populated with intelligent, witty people and an author who won’t settle for easy answers and simplistic politically correct answers. Instead, he has compassion for and acknowledgement of the inbred frailties of the human condition.

Inside the play, Graham by implication cross-examines us in the audience with question after question: How have we changed as individuals and as a society directly because of 9/11 upending our previous reliance on an untested belief in an America that is at its core united? What are we civilized compassionate humans capable of in the heat of revenge? Has our basic perception of the world we live in changed? How have fears intensified latent prejudice? Are we powerless to affect the world around us? How has all this developed into those tense family reunion dinners with progressives on one side of the table and MAGA supporters on the other?

Audrey, a lifelong progressive, exposes herself to conservative thought, which makes Emma wonder if her politics are changing. But she warns Emma: “It’s important to hear both sides of the story. … We’re surrounded by people who think just like us. We go to the same movies, discuss the same books. We all vote the same. Very safe but a bit insular….There’s this whole other world out there, Emma…. We’ve been in a cocoon.”

And later, “Why is everyone so afraid to admit we’ve got enemies? Know why? ‘Cause they’re more afraid they’ll be branded xenophobic or – God forbid – racist.”

Several times, The Duration quietly reaffirms that such issues not only haven’t changed in two decades, but may have intensified. With an almost preternatural vision, when Douglas says he plans to quit his job to do some undecided action to help the situation, Audrey shoots back: “Okay, okay – look, I admire what you’re thinking, but no matter what any of us try to do, this is not going to get better anytime soon. Politicians are gonna’ love it. Nothing easier to manipulate than an angry mob. Reichstag one-oh-one.   You probably think it’s gonna’ heal. I think it’s gonna’ fester. Twenty, thirty years from now people are still going to be angry and those bastards are gonna’ use it.”

For Audrey, history is no comfort. “There’s never been – not once – a period of time where people could just… relax. No wars, religious persecution, depressions, plagues, petty dictators. No time when parents – if they have half a brain – weren’t scared shitless about what kind of world their kids were gonna’ end up in,…What if Emma has a baby? What’s it gonna’ be like for my grandchild? Just once, please, a couple of years – a generation or two – where we could just not…be scared.”

Lewis has forged this evening moment by moment, argument by argument into an enthralling production that you will be talking about on the long ride home and will stick to the inside of your thinking for days to come. As Graham wants, the titular duration in question has no end.