Now & Then Proudly Affirms Gay Romance Is Like Any Other 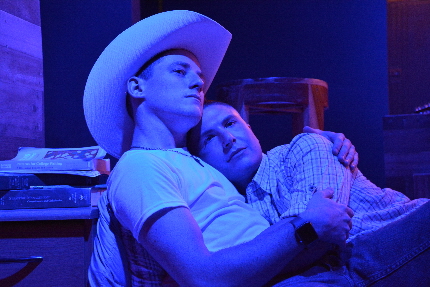 Now & Then, a world premiere musical in Wilton Manors, is a quiet gentle love story told with an inventive twist. But it’s a tale tracing the episodes of an arc so familiar that it might flirt with being boring — except for three redeeming aspects.

First, the central couple’s relationship spanning 43 years is told by three sets of paired actors often sharing the stage at the same time, each pair’s status an indirect comment on each other.

Second, the folky-country score by Dennis Manning is heartfelt, lyrical, often touching – and played live on guitars by Manning and two other actors.

And third, and most telling, the couple is gay. So the subtext — and it never seems paternalistic – is that homosexual love, true love, is no different than heterosexual love with its rough patches and conquering joys. This isn’t an earth-shaking revelation to most straight audiences (La Cage aux Folles is playing at Broward Stage Door this month). But for gay audiences, it must be a kind of a “finally” moment seeing this truth validated by being simply and honestly portrayed on stage in depth — the polar opposite of life depicted in The Boys in the Band.

This comes most clear when each of the three couples is kissing. Directed by bookwriter Ronnie Larsen, these frequent scenes are not meant to be daring, titillating, lustful, funny or exploitative. They are just poignant expressions of tender affection lasting a few seconds, as opposed to those pecks on the mouth or marathon clinches seen in many plays that self-congratulatorily trumpet that two men are kissing before your very eyes! These people love each other and it’s as simple as that.

Soon after, the musical moves on to the same couple in early middle-age after they have lived together for years and their dreams have stalled. Daniel #2 (Matt McClure) is frustrated selling mattresses while still hoping for a break in Nashville, and Greg #2 (Tim Evanicki) has become a pragmatic low-level bank employee.  Daniel has become an emotionally-shuttered alcoholic as Greg tries to get his love to reinvigorate their struggling relationship regardless of whether he has a music career.

Finally, we meet 62-year-old Daniel #3 (composer Manning) who has been providing steady background music since the opening scene while compassionately watching the proceedings from a perch at the top of the set. Greg #3 (Ansel Robin Thompson) is in remission from cancer. He does not share Daniel’s optimism that he will live long but he urges Daniel to buy a waterside condo. There is little doubt how their facet will play out.

It doesn’t matter how autobiographical this work may or may not be for the real Daniel Manning, although naming the central character after himself certainly raises that question. Indeed, the concept for the show is Larsen’s based on Manning’s music.

Because the universal aspects of any long-term relationship are ticked off one by one with no special insight, the show does drag on a bit. Larsen’s dialogue also contains more than its share of well-worn homilies, bromides and clichés that some skilled actors deliver with conviction and others cannot rescue with their amateur theater delivery. And we know how the middle section will turn out because we can already see the older couple still intact.

On the other hand, director Larsen stages bookwriter Larsen’s concept deftly and inventively by visually, aurally and dramatically juxtaposing these couples. When the #2 couple going through an especially tough period, we can see the younger couple deep in the glory of new-found love and the older couple caressing each other as an affirmation of a life shared together. At one point, the three Daniels advise each other, and in another, the three Gregs face mortality holding hands. In another, the younger and older couple happily trim the same Christmas tree while the middle couple quarrels during “the worst Christmas ever.” These conceits don’t always land solidly; some seem a bit forced. But when they do work, Now & Then tugs at the heartstrings.

The most consistent virtue is Manning’s heartfelt music, which gloriously meanders in a fusion of several genres. Without intentionally emulating them, it echoes early Indigo Girls, Joni Mitchell, coffeehouse folk and a hint of Grand Ol’ Opry, notable for rippling cascades of finger-picked notes along with strummed background chords that add strength and palpable dimension. Most of the songs are riffs on declarations of love. The lyrics sometimes read like a Hallmark card, especially reviewed on dry paper. Yet, partnered with the music and the performances, their sincerity cannot be mocked or challenged.

Not that it matters, but it’s never clear whether everything are memories of Daniel #3, or whether all three eras are occurring simultaneously akin to New City Players’ Constellations, or whether divisions of time and space evaporate into meaninglessness. But the youngest couple talk about Beyonce and Greg carries a box bearing the words Amazon Prime, so there is some confusion.

Further, theater audiences are supposed to indulge artists by cutting them some slack in suspension of disbelief. But the performers playing the same role look very little like each other, don’t sound similar and are not strong enough actors to copy each other’s personas or mannerisms.

Still, the cast is undeniably engaging. Some have evocative voices like Walton, Jenkins and Evanicki (whose solos are deeply affecting). The others are perfectly serviceable, although almost everyone but Walton misses notes from time to time, some more often than others. The Daniels’ guitar playing is deft, especially Manning’s work on the 12-string.

The production is being mounted at the newly-rechristened Wilton Theater Factory – the complex just south of Five Points in Wilton Manors, founded by Abyss Theatre and expanded into two adjacent stages by Island City Stage. The upgrades by the latter include a sound system that makes musicals like this and the recent Next To Normal sound surprisingly clear without overwhelming the audience. Its execution by Abraham Oleksniaski and Joseph Martinez is flawless. Even with a limited amount of hardware to work with, lighting designer Jamie Brothman and technician Melquisedel Dominguez keep the audience era-oriented. There’s even a moment of “ka-boy” line dancing from Andrew Fiacco that plays a crucial part of the plot development.

Now & Then performing through Sept. 30 at the Wilton Theater Factory, at 2304 N. Dixie Highway, Wilton Manors. Show times are Thursdays to Saturdays at 8 p.m. and Sundays at 5 p.m. Running time 2 hours 15 minutes including one intermission. Tickets cost $35-50. Visit https://nowandthenmusical.com/