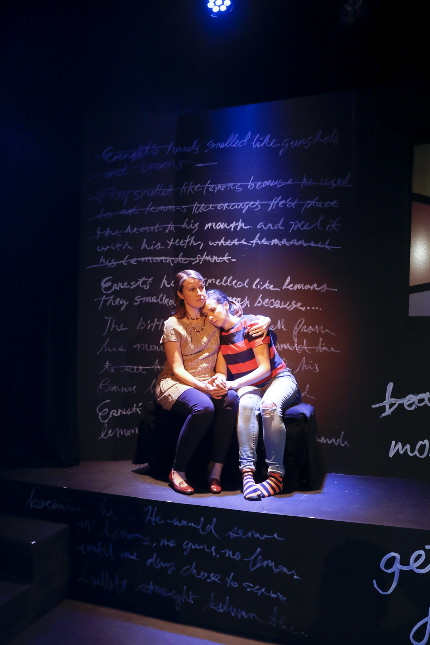 Watch burned-out social worker and imminent divorcee Elisa fight through a well-earned weariness to connect with her brilliant but naïve daughter. Her Laney is passionately, almost manically, trying to adjust to a new town and a new school in addition to all the usual tumult of being 14. Both are trying to cope with the profound damage from a tragedy in their lives that has left Elise drinking too much and Laney sporting a hump of knotted muscles on the back.

Or watch the incisively questioning Laney trying to connect with the equally shy and slightly older Maribel, a devout Christian who wants to gift her new friend with the salvation her church has given her.

All three are lonely outsiders fumbling and stumbling as they try to make human connections, a tableau that should resonate with the secret angst of most audience members.

But this particular audience member never figured out the applicability of the title, therefore posing a question whether Trieschmann’s entire intent came through. Others in the audience may have figured out who or what was crooked as reinforced in multiple dictionary definitions painted in white on the black walls of the set.

Biblical injunctions also daubed on the walls and floor would seem to set up a coming train wreck of the stratified mythology of organized religion and the flexible compassion of human relations. But they never seem to clash dramatically until a devastating final scene. Indeed, while the mother quips gentle criticisms of  religion and the daughter questions its unimaginative strictures, Trieschmann’s script seems less judgmental so much as observational. She recognizes that both paradigms are trying to provide comfort and succor in their flawed but sincere way. No direct accusations of hypocrisy, insensitive cruelty or condescending “opiate of the masses” sentiments are evident. Rather, the production endorses the more logically defensible and humanistic virtues of empathy. Could it be that Trieschmann is saying that religion only offers a bogus and empty promise of unquestioning sustaining love, compared to the mutual love of flesh and blood people? I genuinely can’t answer that.

What does work beautifully is the depiction of bright, caring people trying to cope with a strange new world after their earlier one has been cruelly upended and turned inside out.

Director Nicole Stodard has assuredly orchestrated with an invisible hand this smoothly flowing dance of people trying to heal freshly rent raw nerve endings. In her intimate Vanguard Sanctuary for the Arts, she manages to make scenes of two people sitting and talking quite engaging. In one, Laney, yearning to cement a bond with Maribel, sits in a darkened Church of the Holiness sincerely pledging to convert to a faith she doesn’t really understand. The fact that someone besides their families truly cares about them leads them to a kiss that Laney extrapolates into the trumpeted belief that she is a “Holiness lesbian.”

The production benefits from the dead perfect casting of three actresses who inhabit their characters rather than act them, quite a feat since the women playing a 14-year-old and 16-year-old are obviously adults.

Krystal Millie Valdes creates a completely recognizable teenager whose preternatural intelligence and precocious talent as a writer is a mixed blessing as she rides the herky-jerky emotional rollercoaster of adolescence. She enthusiastically erupts with the rapid fire verbiage of a teenager rushing headlong away from her troubled past and unmoored present toward an unreadable future. It is a more realistic riff on the Molly she portrayed in Slow Burn Theatre’s Peter and the Starcatcher last season.

Daryl Patrice does equally well with the difficult job creating Maribel, someone less questioning, not on Laney’s IQ level, and hungry for the straight talk about sex that Elise provides. Although a true believer because she was raised that way, her Maribel’s evangelism comes from an altruism not the self-aggrandizing desire to impose her vision on others. Before Laney, religion has provided the support she sought to the point that she believes she has invisible stigmata. When she tells Laney that Jesus pays attention to everyone and takes on your pain, Patrice makes the prospect alluring.

But first among equals is Elizabeth Price, once again delivering an outstanding performance, this time of someone deeply wounded and struggling not to unravel in front of her child. Price embodies Trieschmann’s single mother whose recent tragedy has forced her to scrap her previous life and return back to her hometown of Oxford, Mississippi. And yet, with a growing dependence of alcohol and a talent for witty gallows humor, she soldiers on with no idea where she’s going or how she will prevail – only the certainty that she must protect and nurture Laney. As Laney says and does those thoughtless impulsive things that teenagers do rebelling against parents, Price breaks hearts as she avows from the marrow of her bones that Laney is the only thing she has in her life. She never seems nasty when she punctures Maribel’s religious and social pronouncements such as when Maribel asks why she doesn’t cook as often as her mother does. Elise jokes sardonically, “One of the benefits of being a heathen is you don’t have to cook for your husband.”

As usual with Thinking Cap, set designer Alyiece Moretto-Watkins and lighting designer Joel de Sousa create a theatrically imaginative visual and aural environment, such as the dark walls adorned with those aphorisms, excerpts of Laney’s edited stories and the ever-present lists that Elise uses to stay focused. But always in the background are colored panel indicating stained glass windows. Bree-Anna Obst eases the scene transitions with live mood-enhancing music, mostly played on a ukulele.

If the meaning of the title gives audiences something to ponder and discuss on the ride home, the journey being depicted is well worth the visit. 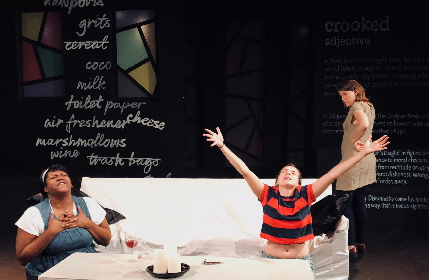