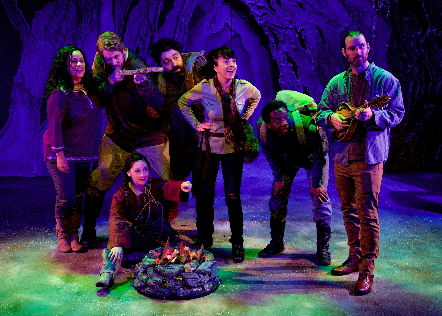 Surveying the audience at the opening-day performance of Theatre Lab’s first full-length family production, I couldn’t help but wonder if the company missed its demographic target. There was a smattering of pre-adolescents and their parents, but the seats were mostly taken by middle-aged Theatre Lab loyalists, industry veterans and 20-something couples—all bringing the same discernment to a Saturday morning production about children bonding in a forest full of gnomes, rumphobs and harpies as they would a Friday night one about revolutionary feminist figureheads or inner-city Brechtian re-imaginings. After seeing the production, it’s easy to see why.

We don’t typically cover children’s theater on this site—it’s too niche, too juvenile, with a quality control that varies as widely as the swings of a pendulum—but artistic director Matt Stabile strove to mount a show in the Goldilocks Zone, appealing to children of 7 to 17 and their parents, and their grandparents. As Stabile phrased it on opening day of Ronia, the Robber’s Daughter, he aimed to produce a play that was both “appropriate and engaging” for all audiences.

It helps that Stabile selected professionals from the adult theatre world in everything from the script to the lighting. The playwright is Allison Gregory, she of the aforementioned Brechtian re-imagining, Motherland; the cast includes two Carbonell winners and a Silver Palm recipient; the musical score, composed exclusively for this production, is performed live during every performance by a graduate of Berklee College of Music. Three-time Carbonell nominee Thomas Shorrock lit the production, and the set is by Michael freakin’ McClain. Even the source material is globally respected: Gregory adapted Ronia from a 1981 Swedish book that has been translated into some 40 languages.

The result is a show that satisfies the parameters of youth theatre but with a pedigree that transcends its genre. Stabile’s production bristles with imagination, wit and pathos that resonate across all generations—not in the Peter and the Starcatcher kind of way, with a risible fart joke for the kids straddling an opaque Philip Glass reference for their connoisseur parents. This Ronia doesn’t need to talk up or talk down; it talks straight, with an unfettered exuberance that can’t help but charm. It is certainly overlong, and we’ll get to that later, but too much of a good thing is still, in toto, a good thing.

Ronia is set, per the script’s verbiage, in “a mythic countryside, some distance in the past.” A busy prologue recounts the momentous introduction of the title character (Leah Sessa), who was born the day a lightning storm split her parents’ forested territory into two regions separated by a chasm. In one, Ronia lives with her father, Matt (Timothy Mark Davis) and mother, Lovis (Angelina Lopez Catledge). In the land to their right, another family has taken up residence, and it just so happens to have birthed its own star child, Birk Borkason (Roderick Randle), the night of that very storm.

The families of Ronia and Birk have been at war ever since, each with a valid claim on their parcels of land, each making their livings on the plunder of others. It will take the humanistic efforts of their now 12-year-old offspring to snap some sense into their tribal parents, but not before they overcome their own indoctrinated disgust for each other.

Dramaturgical touchstones reverberate through the pages of Gregory’s script as fluidly as contemporary geopolitics. These warring clans could easily be the Capulets and the Montagues, or the Sharks and the Jets, with star-crossed companions seemingly doomed by their arbitrary ancestry.

Equally at play in the story’s subtext is the rise of hatred and bigotry—the scorn for the Other — that’s been spreading across the world like a waking nightmare. You could make a strong case that Ronia represents an allegory for Israel/Palestine. One of the beauties of the production is that none of this is hammered home with the overtness one might associate with children’s theater; it’s smart enough to let audiences decide which themes to unpack.
Indeed, the ebullient performances betray no hidden agendas.

The acting is as present, effusive and in-the-moment as your dog is when you return home from work. This is far from a slight. Children’s theatre acting is as dissimilar from adult fare as silent-film acting is from the talkies—it’s all bulging eyes, broad hand gestures, unsubtle communication. When characters are happy, they’re happy to the extreme: They find everything infinitely exciting. When their fortunes reverse, their frustration reaches apocalyptic proportions.

When done well, as it is here, this exaggerated spirit is contagious—from the cartoonish lisp that Niki Fridh gives Little Snip, the slow-witted runt of Matt’s family; to Zack Myers’ hammy geriatric mannerisms and superlative comic timing as Noddle-Pete, the family’s doddering patriarch. Randall brings the right amount of frolicking childish innocence to Birk, though he fumbled a line or two an opening day. Given every imperative in the script to chew the scenery like a ravenous wolf, Tim Davis is a hulking presence, his regular eruptions reaching volcanic proportions. His character can be as furious as a poked bear, but Davis finds his humanity, too—the hurt underlying his wayward impulses.

That any of Stabile’s cast manages to find this sort of nuance is one of this ways the production goes beyond its genre’s call of duty. As Ronia’s sensible and compassionate mother, Catledge brings an angelic quality to the proceedings, and her pain, when she fears her daughter’s demise, is palpable.

Sessa, who joked with me in a pre-show interview that, “here I am, playing a 12-year-old again,” continues to get these roles because she embodies the whims and ecstasies of childhood so effortlessly. This is one of her wheelhouses: Many of her finest roles in adult shows, from Oklahoma! to Side by Side by Sondheim to Heathers, have been showcases of big gestures, of ids given free rein. That’s what Ronia is all about, too, but she’s also captured by the story’s more tragic developments, conjuring tears that spread to the audience.

Gregory’s script abounds in special effects and visual challenges, and Stabile and his design team respond with a scrappy, DIY inventiveness. Evoking the many denizens of Matt’s forest, costume designer Dawn Shamburger and props designer John Shamburger transform cut paper into both hand and full-body puppets, from skittering foxes to an opinionated horse, with garbage-bag ribbons for a mane, embodied by Davis (most of the cast amiably takes on multiple roles, always with gusto). Lighting designer Shorrock expertly guides the play’s important transitions through the seasons, its violent storms and radiant sunrises. (Kudos to the bright eyes, in ominous pairs of red and green, appearing at strategic areas of the set to indicate woodland creatures in hiding.)

Last but certainly not least, composer/musician Paul Curtis underscores scenes of merriment, exploration and terror with emotional texture from his perch on stage right, invisibly cycling through instruments from acoustic guitar and mandolin to cello, flute and glockenspiel.

This production marks the U.S. premiere of Gregory’s adaptation, and like many premieres, it is imperfect. At two hours with an unnecessary intermission, it overstays its welcome by several scenes. Along with a protracted resolution, Gregory has earnestly overstuffed the script with more life lessons than the story needs, as if shoehorning a week of Mister Rogers episodes into the final act.

But any company considering this show in the future would be wise to follow Theatre Lab’s lead. As it has proven, family theatre doesn’t have to be just kids’ stuff. 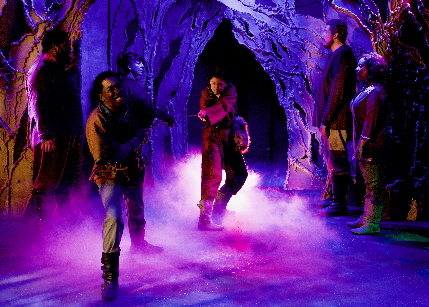