Posted on December 1, 2014 by Bill Hirschman 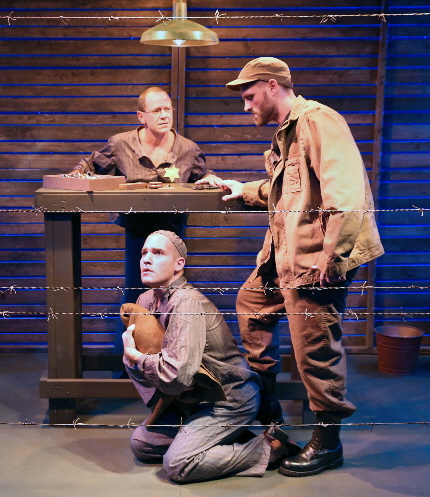 Timekeepers bowed at Island City Stage in October 2013. In April, the production won Carbonells for best play, best director, best actor Michael McKeever, best sound, best lighting and best set design. The production is being remounted with all the original parties involved Dec. 3-21 at the Levis Jewish Community Center in Boca Raton. What follows is the original review.

The screen door slams open and a surly prisoner who volunteers as a guard (Matt Stabile) ushers in a taller man clutching a blanket to his chest and hunching over in deferential fear, prisoner 9355. He has been brought here to help 1793 repair watches.

But 9355, who reveals his name is Hans, needs 1793’s expertise to stay alive. He has claimed to be able to repair watches, a complete lie meant to avoid ultimately fatal work in a concrete plant or becoming a guinea pig in medical experiments. But 1793, once the best horologist in Berlin, rebuffs every attempt to begin a conversation.

Clancy has Benjamin say horology is “my life’s work,” a phrase that refers to both his obsession and what is keeping him from the gas chamber. Later, when Benjamin berates Hans for trading sexual favors for jam on bread, the Jew asks contemptuously, “How low can you crawl?” Hans yells back in shame at his pragmatism, “I have no idea!”

Westrich is quickly becoming a reason to go see a show simply because he’s in it. While he earned kudos for Island City Stage’s The Twentieth Century Way (we weren’t as impressed with that show as most people), he truly scored in Outré Theatre Company’s tick…tick…BOOM and Slow Burn Theatre’s Avenue Q. While his Hans is unapologetically gay, he reins it in just short of a caricature. His flamboyance seems designed primarily to vex Benjamin. Westrich creates a three-dimensional human being who can barely conceal his fear but who is the braver of the two since he has yet to surrender his sense of humor or desire to make a human connection.

The production values are atypically impressive for this tiny venue. Michael McClain’s setting is note perfect: a claustrophobic barracks the size of a dog run, backed by weather-worn slats with gaps large enough to let Preston Bircher’s lighting shine through. Especially unnerving is that the fourth wall between the play and the audience is comprised of strands of barbed wire encasing the action. The aforementioned sound design is by David Hart, partly responsible for the torrent of sounds in Leeds’ production of Last Call a year ago.