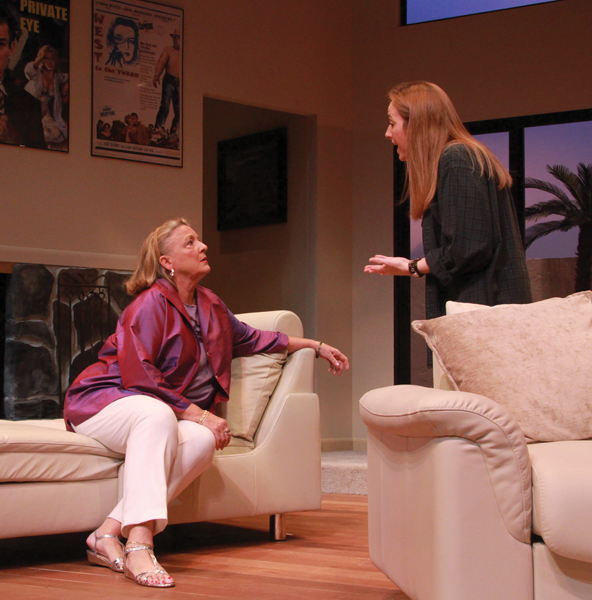 At various times in Jon Robin Baitz’s Other Desert Cities, all five members of the Wyeth family say to each other some version of the line, “I love you, but…”

That last word raises the question in this finely-crafted play whether there is such a thing as unconditional love. Surprisingly, considering all the devastation that can only be inflicted by people who love each other, Baitz’s answer is “yes.”

Actors Playhouse’s rock solid production of last season’s Broadway triumph surgically peels away the Wyeth family’s layers of lies and fragile accommodations that allow humans to interact after perceived betrayals. The Wyeths are not really a dysfunctional family unit. Up to that “I love you, but…” point, they are ferociously loyal and supportive in direct spite of their shared tragedy and their self-destructive ways of coping.

Powered by a fits-like-a-glove cast under David Arisco’s leadership, the perfectly fine first act here doesn’t eclipse the portrait of subterranean tensions that a stunning New York cast created, but this Florida troupe slams home the shattering second act with more gut-scraping, heart-wrenching passion than we saw on Broadway.

It’s Christmas Eve 2004 in the tastefully elegant living room of the Wyeths’ Palm Springs WASP’s nest as four of the five relatives arrive after an early-morning tennis game.

Parents Polly (Barbara Bradshaw) and Lyman (J. Kenneth Campbell) are wealthy pillars of the GOP establishment , true believers who counted “Ronnie and Nancy” among their intimates. In fact, these are self-made patricians who value what they have built. Polly and her sister Silda began life as Texas Jews who found an outlet for their intelligence as Hollywood screenwriters of light comedies. Lyman initially was a contract leading man in dozens of western and detective movies before his political alliances netted him an overseas ambassadorship and chairmanship of the party.

Their children are home for the holidays: Recent divorcee Brooke (Erin Joy Schmidt) is a penny-bright one-novel writer, and Trip (Antonio Amadeo) is intellectually slumming as the writer/producer of a Judge Judy type television show. Silda (Lourelene Snedeker) is a chronic alcoholic sleeping away the morning in the next room as she tries to dry out in the bosom of her family.

Everyone seems cautiously glad to be together, indulging in shared in-jokes and gentle teasing that sound a bit like barbs. All five are intensely sharp and hyper-articulate, armed with repartee and rejoinders as only characters in a play can be. As the day progresses, we also see that they are master manipulators and expert chess players in the game of family relationships.

But amid the copious volleys of humor, shards of personality and backstory are revealed. The aggressively sunny Brooke has a history of emotional fragility. The doyenne Polly is unyieldingly judgmental. Lyman the peacemaker shies from conflict. Bit by bit, pieces of façade drop off to expose tensions, resentments, recriminations and secrets. And suddenly, amid more rueful jokes, the family’s central 30-year-old tragedy, which has not scabbed over but still oozes blood, is forcibly resurrected.

Brooke has finally finished another book after six years. Creatively blocked from fiction, she has scraped out of her marrow a memoir that re-examines the family’s initial complicity in a shameful public calamity. The oldest son, Henry, rebelled against his parents’ unwavering support for the Vietnam War, dropped out and joined a group that later bombed a recruiting center in which a homeless veteran was killed. When Henry’s complicity was revealed, he drowned himself off a ferry near the Canadian border.

For Brooke, the book is an exorcism of her own complex reactions starting with her anger that her parents drove Henry out of the house and their public repudiation of him before and after the bombing. Naively, perhaps, she has come home seeking the family’s blessing for a work that will publicly revive a horror the family has tried to repress.

What ensues are explorations of the meaning of human bonding in a family, made more complicated by an artist’s dilemma between creating art that has integrity and hurting the people you love. But the audience shouldn’t pledge their allegiances too quickly; a twist of the kaleidoscope transforms the entire picture into something quite different. Perhaps a few audience members will see the exact nature of this epiphany coming, but we’ve never spoken to anyone who has, so best you don’t dilute your attention trying to outguess it.

Baitz, author of The Substance of Fire, Ten Unknowns on stage and creator of TV’s Brothers & Sisters, has penned a classically well-constructed script that excels in creating characters who seem to be one thing at first and then prove to be far more complex as revelation after revelation emerges. For instance, the seemingly unforgiving Polly has nursed both her daughter and sister through past crises like the most protective mother tigress.

Baitz’s compassion extends to exploring a rare theme in modern theater: the intersection where personal issues and politics shape each other. Baitz clearly does not side with Polly and Lyman’s arch conservatism, but he makes a convincing multi-layered explanation for it. The couple sincerely cling to the old values like a piece of flotsam on the ocean after the Titanic sinks because they cannot maintain  their bearings in an amorphous and ever-morphing landscape. This has only been aggravated by the uncertainty wreaked by tragedies and secrets. One of Bradshaw and Campbell’s achievements is making the couple’s stereotypical one-percenter views credible, defensible, even worthy of our sympathy if not our alliance. But Baitz is also condemning how unbending political views make no allowances for divergent opinions among those in their inner circle.

Some people might think that the big reveal of the play thematically undercuts everything that Baitz has set up before it. But the thesis about unconditional love makes the pivot not only thematically consistent, but crucial. 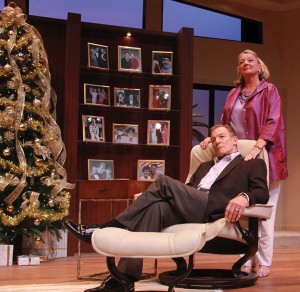 We’ve backed into the production’s chief virtue: the cast under Arisco’s guidance. Aside from Campbell, it would be difficult to imagine a better cast from South Florida’s acting ranks. It’s not that anyone is typecast, but these roles are solidly in these actors’ wheelhouse.

Perhaps it’s having seen Agatha Christie’s The BBC Murders radio theater this week, but it’s striking how the actors’ voices reflect the characters: Bradshaw’s iron will clothed in velvet, Amadeo’s sorrow-tinged sweetness, Campbell’s strong-jawed bluster, Snedeker’s Thelma Ritter acerbic wit, and Schmidt’s unique sound ranging from squeaky to rumbling, overlayed with a scratchiness, which invests everything she says with an authenticity. Further, none of the characters regardless of their posturing can disguise their pain bubbling up from the sea floor.

Bradshaw long ago proved her huge range including these well-heeled doyennes. But the specific colors she brings to Polly and the depth that she invests in those colors is remarkable. Polly, like Lyman, is a fervent adherent to “behaving well” in the face of adversity. So Bradshaw is absolutely chilling when she allows us to see the icy steel beneath her good manners as Polly warns Brooke: “Whatever it is, whatever you do, you’re our daughter and I will love you. I can’t stop you from doing whatever you do. I can’t prevent it. But you must know that whatever you do, there are consequences to your actions….How could I trust you? How could I ever be in your presence, my dear? If you betrayed the trust of the family, a family that has so valued discretion and our good name for the past three decades…. You would lose us.” In Bradshaw’s mouth, this isn’t a threat; it’s a rue-filled reminder of a law of physics. Then she kisses Brooke on the forehead and walks out.

Matching Bradshaw step for step is Schmidt who hasn’t had a role this meaty since Fifty Words at GableStage. Her bonhomie in the opening scene is absolutely persuasive, so it’s significant that she makes the reveal of her bottomless angst so convincingly part of the same character. When she’s allowed to finally cut loose in the second act, her pain-driven determination to publish heedless of the cost is reminiscent of Giradoux’s Electra. Schmidt fearlessly embraces Baitz’s view that Brooke is not blameless or totally pure in her motives. Schmidt even makes plausible the literally incredible plot set up that Brooke would think for five seconds that her parents would ever sign off on this book.

Campbell, whose face is familiar from film and television roles, is new to the region. Bradshaw suggested him after she played Big Mama to his Big Daddy in Flat Rock Playhouse’s Cat On A Hot Tin Roof last year. He’s a tad less compelling than the others as he sheds his self-image as compassionate peacemaker who finds conflict unseemly and succumbs to gut-shot anger. But Campbell nails the essence of a patriarch who desperately wants to keep his loved ones together for altruistic reasons beyond his natural desire for order and appearances.

Amadeo invests Trip with intelligence and wit rimmed with an underlying sadness at the knowledge of how damaged his loved ones are. Amadeo deftly creates a man trapped in trying desperately not to take sides while being actively supportive of the warring parties.

Snedeker is a past master at slinging witticisms like Dorothy Parker at the Algonquin Round Table. She teeters around the edges of the maelstrom with a physical and emotional unsteadiness that perfectly communicates someone fighting a losing battle to stay sober. Her blowsy mezzo-soprano can deliver a quip like “Palm Springs isn’t a refuge; it’s King Tut’s tomb. The whole town is filled with mummies with tans.” But she also makes it clear that Silda may be the most compassionate of the Wyeths as she sincerely assures the impossibly difficult Polly, “I love you as much as I can, honey.”

The production does have weaker elements. The actors’ chemistry as a family is just adequate, but that will likely deepen during the run. The other problem is they are not adroit on invisibly feathering exposition and backstory into the narrative flow.

Arisco’s guidance of these performances and shaping of the overall production is a reminder that he does a workmanlike job when he is directing the mainstream musicals that are the meat of Actors Playhouse’s programming. But when he is challenged with a thought-provoking piece of work like August: Osage County or Floyd Collins or next to normal, his skill at finding the emotional truth of a piece and elicit fully-realized characters truly comes clear.  He also benefits from a comedy director’s attention to detail and grace notes such as the moment when Lyman, finally letting his resentment break through, addresses his anger directly at a copy of the Brooke’s manuscript although his words are aimed at his daughter.

In the hands of all these artists, Other Desert Cities is a heart-rending odyssey of familial warfare that tests the strength of blood ties when so much emotional blood is spilled. 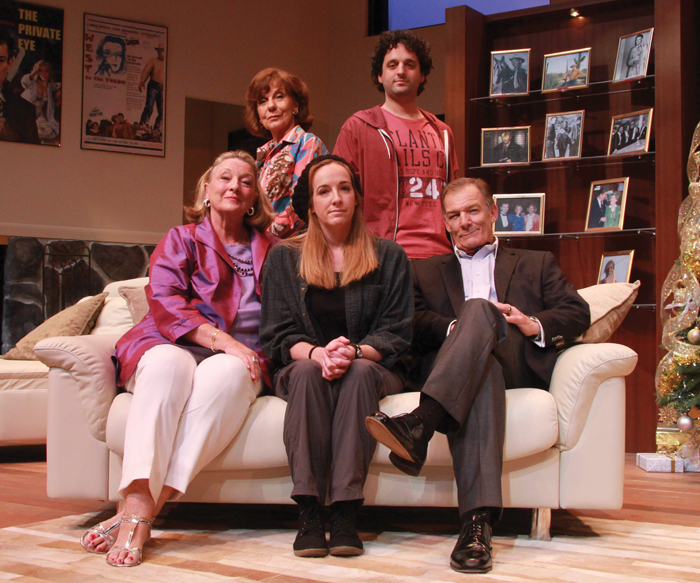