A Gentle Rain at the Broward Center With The Beatles 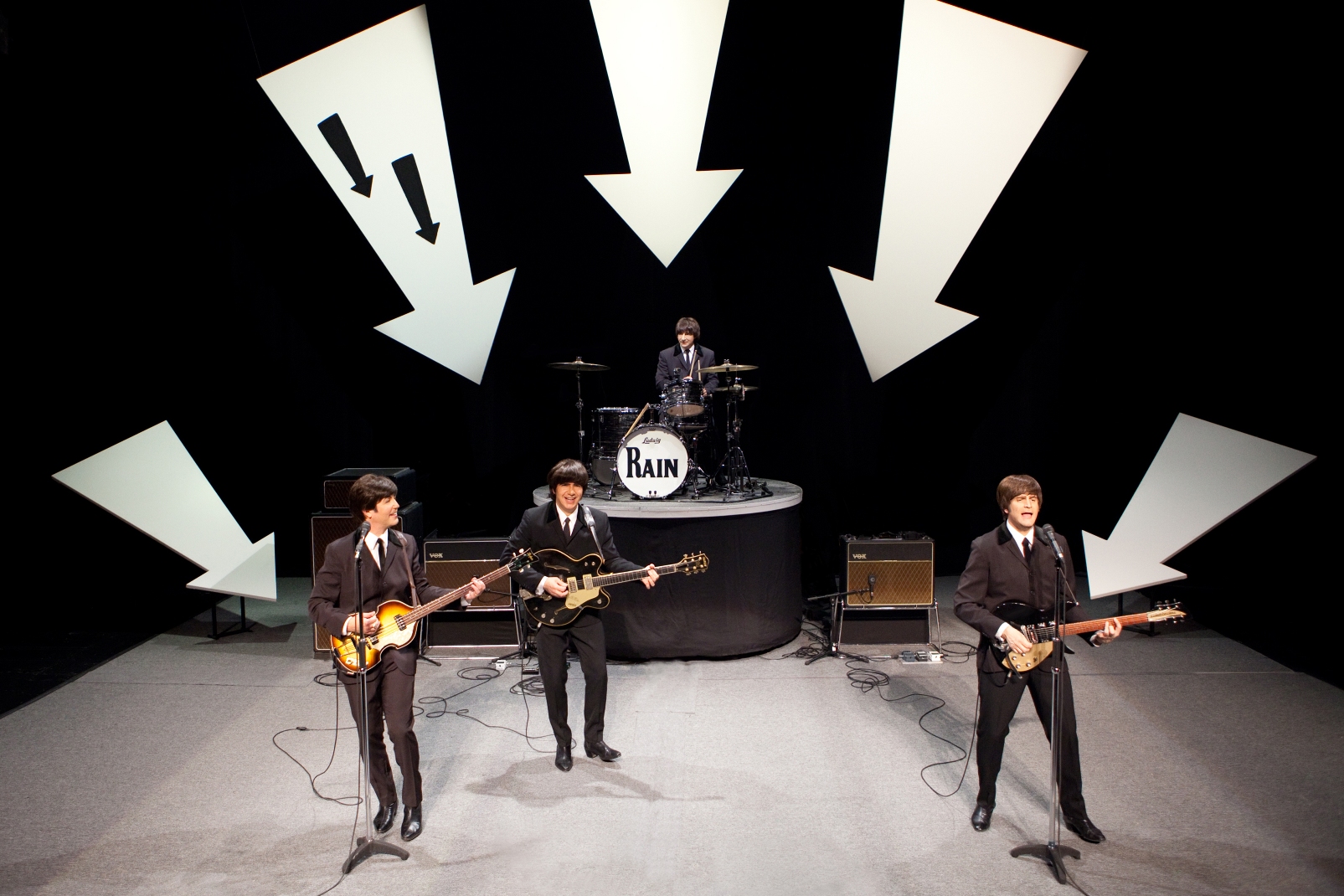 For the Greatest Generation, the smooth, precise cascade of notes in Glenn Miller’s Moonlight Serenade instantly erases decades and transports the listeners to a time when they believed in limitless possibilities.

Decades from now, today’s generation will be descending in an elevator when a whiff of Muzak will waft a half-heard chorus of a Beyonce ballad, ripping open their tear ducts, erasing the decades and transporting…. well, you get the idea.

The creators of Rain – A Tribute to the Beatles at the Broward Center know the alchemy of sounds that summon a hazy kaleidoscope of personalized memories for Boomers with a dizzying snap like the hyperdrive in Star Wars.

In each of these cases, the transformative properties of a tribute band like Rain (that’s the name of the band as well) usually lie less in the performers’ skill than the willingness of the audience to overlay their own sonic memories, accompanying images and painfully pungent recollections of new-found ecstasy and freedom. A co-opted crowd doesn’t even need a good band to provide reasonable facsimile covers to set off the Pavlovian responses of nostalgia; the listeners will do most of the work themselves.

Which is what makes Rain a pleasingly atypical phenomenon as it opens the Broadway Across America season at the Broward Center for two weeks this month.

This faux Fab Four (I wonder how many critics have used that term) don’t generate the electricity that the Beatles engendered, as depicted in archival footage projected on large screens in the auditorium. People hoping to recapture (or see for the first time) the once-in-a-lifetime sorcery that was the Beatles will be disappointed. There’s a sense of looking at your past through cloudy window glass.

But the genial, likable quartet (plus a backup keyboardist) is genuinely talented enough at recreating every original lick and every inflection that they actually earn the audience’s investment. When they rip into Twist and Shout or Revolution, the multi-generational crowd needs no exhortations to stand up and clap along. The crowd sings along softly but audibly on “acoustic” numbers like Blackbird. It’s a warm smile of a show.

It’s simply a succession of historic gigs, starting with their debut on the Ed Sullivan television show, working through the Shea Stadium date, etc., etc., and eventually ending up with the rooftop finale of the Let It Be album. En route, they give convincingly faithful recreations of about 30 greatest hits, ranging from I Want to Hold Your Hand to Hey Jude.

The producers have admirably cloaked the show in production values like state-of-the-art lighting and back projections to drive off the specter of a lounge act at the Holiday Inn. Costume and wig changes are done in blackouts while wry videos recreate the changing periods with news footage, some modern animations and some comical television ads such as Fred Flintstone hawking Winston cigarettes.

Rain never tries to cover up the fact they are a tribute band, not Elvis impersonators.  Yes, they affect Liverpudlian accents and wear wigs, fake moustaches and costumes to resemble you-know-who. But the performers pointedly never call each other John, Paul, George or Ringo. In fact, they occasionally make references to the passage of decades, how the drug of choice these days is Lipitor and they italicize the ironies of the lyrics in When I’m 64 for their current audience embracing retirement.

It’s a smart move since, from Row H, the band members don’t look like who they’re standing in for. They’re a good 25 years too old to be convincing as provincial working-class kids suddenly thrust into the media maelstrom. But they project a mildly winning charisma.

The band Rain has had personnel changes, but this group – Steve Landes, Joey Curatolo, Joe Bithorn and Ralph Castelli under the off-stage leadership of Mark Lewis – has been jamming on these tunes for nearly 30 years. Lewis founded Rain (then Reign) as a California bar group in the 1970s, and all four of the principals appeared in Broadway or national tours of Beatlemania in the late 1970s. All have been performing as Rain on and off in clubs, bars, cruise ships and other venues since the mid-1980s.

Then Lewis and some other producers brought this show with amped-up production values to Broadway where it played 300 performances before shutting down last July, even winning the 2011 Drama Desk Award for Outstanding Revue.

So, they know what they’re doing and, amazingly, they appear to radiate an infectious joy in their 9,735th rendition of Get Back. Lewis has deftly orchestrated the songs so that even the studio work like the heavily textured Sgt. Pepper’s Lonely Hearts Club Band can be performed live, thanks to skilled keyboard/synthesizer work of the fifth non-costumed band member at the back corner of the stage, Mark Beyer.

But I need to rant a bit, so check out for a moment if you wish: The traditional definition of musical theater is blurring, often creating exciting work that pushes the boundaries of a sometimes hidebound art form and reinvigorating it.

That said, Rain is no more musical theater than a Guns ‘N Roses retrospective concert. While thoroughly entertaining on its own merits, subscribers to the Broadway Across America will have to wait until Disney’s Beauty and the Beast later this fall to see something that qualifies as theater in even the broadest sense.

Hair, Jesus Christ Superstar, Jersey Boys, Spring Awakening,  Next to Normal, even Rock of Ages have a score as dependent on an electric pickup as a string section. But they also have what Rain does not – a plot, conflict and character development. And frankly, that’s what most folks coming to the series are looking for.

Rain, it is what it is and it’s done pretty well. But it’s taking up a slot that ought should have gone to Next to Normal or, dare I suggest it, a straight play.

This entry was posted in Performances and tagged Beatles, Broward Center for the Performing Arts, Rain. Bookmark the permalink.