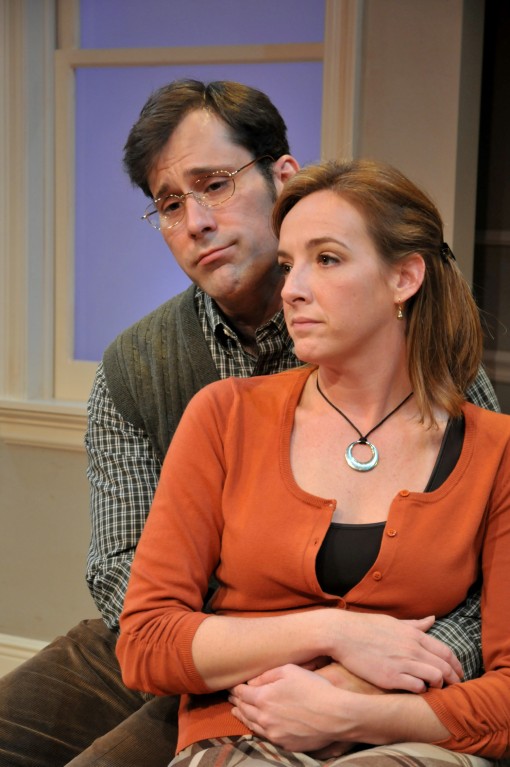 Dread festers just underneath the confident facade of Gabe and Karen’s picture book life. The couple may not even know why, but they are treating the disintegrating marriage of their best friends Tom and Beth like a virulent disease.

On some intuitive level they understand the message that Donald Margulies’ posits in his Pulitzer-winning Dinner With Friends that opened Friday at Palm Beach Dramaworks: Many relationships are rooted in delusions and illusions because we simply cannot know anyone as well as we think we do ‘ including our spouses.

Director J. Barry Lewis and a skilled ensemble bring Margulies’ subversive nightmare into such blinding daylight that many couples will go home examining their own relationship much as Gabe and Karen end up doing.

Dinner turns on the recognition that as nuclear families disintegrated during the 20th Century, dislocated young adults pieced together extended families far from home. Today, married couples enfold friends into relationships that are often closer than their ties with blood relations.

But when these carefully constructed contrivances are lanced with painfully cruel truths, we feel betrayed. Why wouldn’t our friends have shared this as well? Was everything about our relationships with these people a lie? And if we can’t trust the forthrightness of our selected ‘family’ members, can we trust our most sacred and personal relationship?

The play opens with food writers Gabe and Karen (Jim Ballard and Erin Joy Schmidt) making yet another gourmet dinner for their friend Beth (Sarah Grace Wilson) whose husband Tom (Eric Martin Brown) is supposedly out of town on business. Both families’ children are noisily horsing around in the next room as the couple embellish and correct each other’s recollections of a food-centric trip to Italy.

Beth suddenly breaks into sobs and reveals that Tom has left her. He is travelling to be with his lover. Karen takes Beth’s side instantly and condemns Tom’s behavior as described by her friend.

But a snowstorm has kept Tom in town and we see him later that night when he returns home to have one last bitter argument with Beth.

He then runs to Gabe and Karen’s home in the wee hours to tell his version of the truth — which intersects with Beth’s only in that their marriage has been eroding secretly for years.’ During the rest of the play, we watch this bomb explode in slow motion, engulfing and testing Gabe and Karen’s marriage.

Tom and Beth are escaping what was always a doomed relationship (as we see in the play’s only flashback) and both eventually move on to stronger, truer marriages. But Gabe and Karen are so invested in the fiction of their friends’ marriage that they vigorously try to fix the dissolution. Tom and Beth become so upset that their friends can’t see the truth that they expose unspoken, even unrecognized strains inside this extended family ‘ fissures that crack open and cripple the quartet’s relationship. ‘I thought the four of us would grow old together,’ Gabe tells Tom.

The performances are superbly naturalistic; you never catch anyone acting. All four actors create people so recognizable that they might well be your neighbors.

Ballard has the least showy of the roles which makes his work all the more impressive as he clings to the belief that you work through the rough spots in any relationship.

Brown and Wilson convincingly depict their bewilderment and irritation that the couple who profess their devotion cannot support their decision to seek a satisfying future.

But it’s Schmidt who takes the prize with her perfection-obsessed, eternally chatty Karen who is unaware that she focuses on chopping up vegetables for dinner so that she can ignore the scream of inner demons. The actress has a quirky m’lange of high and low registers, pure and scratchy timbres. But she uses them to spin Margulies’ simple language with inventive inflections and intonations that are simultaneously unexpected and yet completely familiar from our own conversations.

Finally, this is almost repetitive, but Lewis is one of the finest directors for intimate drama working in South Florida, possibly in regional theater, period. He consistently elicits nuanced performances that seemingly leave no crevice of the script unexplored or illustrated. His staging is so organic and naturalistic that only a trained theater professional can see his hand at work.

Margulies’ finale raises the likelihood that Gabe and Karen’s marriage is stronger and truer than their friends’. But it doesn’t keep them from a tableau at the last blackout akin to the back of the bus finale in The Graduate in which doubts have shaken their confidence and caused them to reevaluate what they had blithely accepted as an article of faith.