“Evil Dead The Musical” is a bloody great time 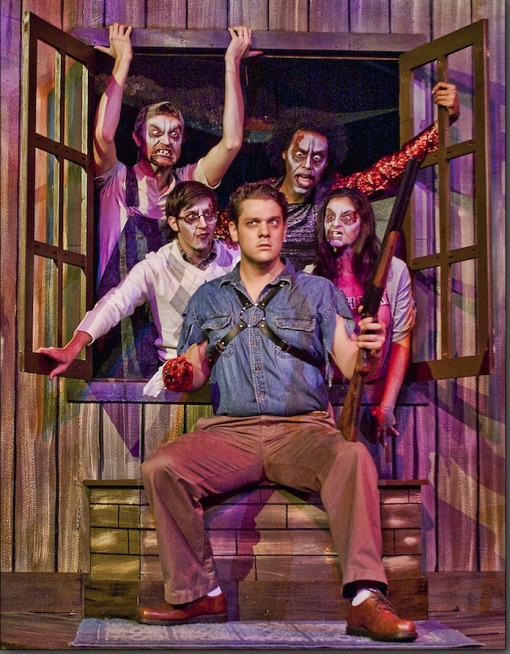 Demonic dismemberment is played for laughs in Evil Dead The Musical, the stage homage to the cult horror movie franchise, which kicks off the sixth season at the Promethean Theatre in Davie.

‘You’re not going to learn a thing tonight,’ Deborah Sherman, the company’s producing artistic director, told the opening night audience. But those who didn’t know it already did learn something–Promethean knows how to treat its audience to a bloody great time. The first two rows are the designated splatter zone, where patrons are guaranteed to be showered in blood.’ (Plastic rain ponchos are provided.)

Whether or not you’ve ever seen a movie in the Evil Dead trilogy is of no consequence–the story has been done, well, to death.

Five stereotypical college students head off to a secluded cabin in the woods for spring break. There’s all-American boy Ash (Matthew William Chizever); his perky girlfriend Linda (Jamie Mattocks); his studious sister Cheryl (Kaitlyn O’Neill); sex-crazed best bud Scott (Troy Davidson) and ditzy blond Shelley (Lindsey Forgey). After playing a mysterious tape recording they find in the cabin, the friends unwittingly awaken evil spirits, and one by one, turn into demons. The body parts pile up as Ash, aided by his trusty chainsaw and a professor’s comely daughter, tries to save the day.

Matthew William Chizever is a worthy successor to the role that Bruce Campbell made famous.’ Chizever has a strong voice, a heroic stance, as well as the charisma to sell the play’s cheesier lines.’ Forgey excels in her double role, as dimbulb Shelley, and as brainy, clothing-challenged Annie. Forgey is especially appealing in the 1950’s style number, All the Men in My Life Keep Getting Killed by Candarian Demons. O’Neill possesses a glass-shattering voice, and the ability to spew exceedingly bad puns with glee. Davidson milks every laugh out of his extended death scene, while David Dearstyne is endearing as Ed, the stereotypical forgettable extra.

Margaret M. Ledford has assembled the top-notch talent, both on stage and behind the scenes, necessary to produce this monster of a show. Ledford keeps the pace brisk so the laughs flow as easily as the blood.
Dan Gelbmann’s ingenious scenic design is a marvel of technical surprises, and seems to move and breathe on its own.” The bloody special effects by Taso Stavrakis and the prosthetic props by Tyler Smith give Promethean’s production a cinematic quality.

Evil Dead The Musical has demon dance numbers, blood, silly songs, blood, funny performances, and, even more blood.’ It’s not great art, but it is a hell of a great time.

Evil Dead the Musical runs through September 12 at the Black Box Theatre at Nova Southeastern University, 3300 College Avenue, Davie.’ Show times are Fridays and Saturdays at 8 p.m. and Sundays at 5 p.m.’ For tickets and more information, call 786-317-7580 or visit www.ThePrometheanTheatre.org.