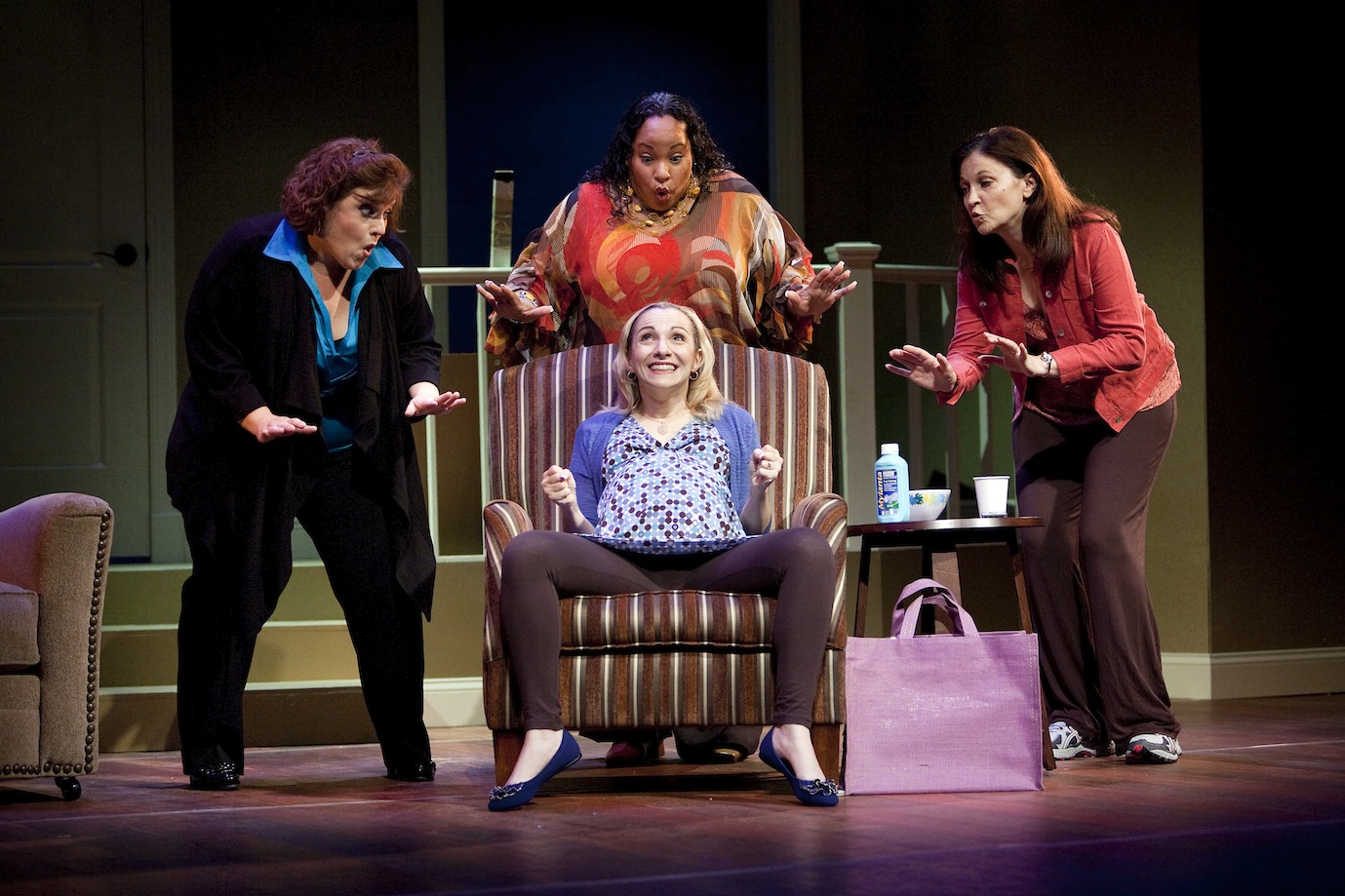 You can pose as a sophisticated cynic and pretend that the middle-brow charms of Motherhood the Musical don’t get to you, but your laughter and sniffles will give you away.

The world premiere of Sue Fabisch’s feel-good celebration of the hard work it takes to be a mother had much of Thursday’s crowd clapping, standing and cheering that someone out there recognizes how tough it is to be a parent.

Motherhood acts as if it doesn’t aspire to much more than an undemanding and diverting evening of chuckles and tears. But without overtly reaching, composer/lyricist/bookwriter Fabisch plugs into the universality of human experience and delights in the sense of community that it can engender.

It is little surprise that Motherhood is being produced by GFour, the South Florida company that turned Menopause the Musical into an international juggernaut. Motherhood, which is actually a stronger piece, seems destined to follow the same path and already has dates in Atlanta and Fort Worth.

The premise is that dewy-eyed Amy (Lisa Manuli) is three weeks from her delivery date when friends throw her a shower. Acerbic Barb (Laura Turnbull) is a stay-at-home mother; harried Brooke (Margot Moreland) juggles motherhood and her law career, and steady but troubled Tasha (Kareema Khouri) is a soccer mom divorcee.

Amy is flush with rose-colored expectations, but her friends spend the evening filling her in on the bittersweet yin and yang between the exhausting realities and the incomparable joys. Don’t let the Cracker Barrel restaurant subject matter deceive you. This is slick, polished work that walks the delicate filament of genuine sentiment without becoming manipulatively sentimental.

This is Fabisch’s first stage musical, but her novelty songs about motherhood caught on with radio listeners in Nashville and she spun it into a cottage industry of writing and performing her usually sardonic, occasionally poignant slices of maternal life.

Her success in tapping into shared experiences is evident from the cheers Thursday for the driving Not Gonna Take It Anymore. The mothers’ anthem imagines a day when ‘I’m not cookin’, I’m not cleanin’, I’m gonna blow up the washing machine, I’m done, I quit, I’m going on strike today.’ The crowd went wild. Similarly, the plus-sized Tasha brought down the house with a scorching I’ve Got The I-Can’t-Lose-The-Baby-Weight Blues.

Fabisch’s report from the front brims with familiar details. Barb warns in one patter song, ‘Steven poured the milk inside the box of cheerios, Daniel’s pushing Sunmaid raisins up his sister’s nose, the dog’s looking guilty and something really smells.’ To which Brooke adds, ‘And daddy lays there, he’s doin’ nothing, ’cause he pretending that he’s sleeping.’

Much of Fabisch’s original score are high-energy tunes echoing a wide range of source music including Brill Building rock ‘n’ roll in Nothing But the Best for My Baby and rousing gospel in The Kids Are Finally Asleep.

There are only a few parodies ”wicked ones in which the new lyrics sit firmly on the notes such as How Great They Were, a lament for once-firm breasts, sung to the Bergman-Hamlisch movie theme. Even more impressive are the introspective ballads about counter-balancing rewards in I’m Danny’s Mom, doubts whether divorce was the right answer in Every Other Weekend and the new mother’s sudden understanding of her own mother in Now I Know.

Neither Fabisch’s tuneful melodies nor her nimble lyrics would seem anything more than pleasing and inventive by themselves. But paired together ‘ and enhanced by Johnny Rodgers’ arrangements ‘ Fabisch weaves an alchemy that makes them irresistibly infectious and undeniably touching.

Nowhere is this clearer than in the tender song Amy sings to an infant, Now I Know. The lyrics are deceptively simple:

Fabisch’s book provides smooth, credible transitions between numbers with sit-com humor such as Barb volunteering, ‘I childproofed my house ‘ but the kids got back in.’

If much of this sounds like a formulaic Erma Bombeck riff on Dr. Spock, it doesn’t come across that way because of the wry but earnest performances of a vivacious cast who never coast for a single second, never distance themselves from the material. All are equally adept at inhabiting their characters and at selling the songs.

Manuli creates a rubber-faced and sweetly daffy Candide-like Amy. Turnbull earns all the best punch lines as the tart-tongued and genuinely weary Barb. Moreland depicts the frazzled demeanor of someone trying to do it without succumbing to schizophrenia. Khouri, the only unfamiliar face in the cast, stops the show every time she stands up to sing.

Motherhood marks the directorial debut of Lisa Shriver who designed the dances for GFour’s Ring of Fire on Broadway in 2005. She competently stages the show, including classic girl-group choreography, but her real accomplishment is the feeling of smooth fluidity and polish that imbues the production.

A fair question is whether the single, the celibate and the men in the audience will feel as validated. The producers think the show will speak to ‘anyone who is a mother or who had one.’ But the material is entertaining enough to keep your attention most of the time, although the show occasionally veers close to seeming a shade repetitive, and, even after two weeks of previews, can stand further editing.

We could go on describing this, but the odds are good that you’ll see it yourself: Motherhood the Musical will be required viewing for groups of women on a girls’ night out for many years to come.

Motherhood the Musical runs through Oct. 31 at Miniaci Performing Arts Center on Nova Southeastern University’s Davie campus. Performances are generally 7:30 p.m. Tuesday through Sunday, 2 p.m. Saturday and Sunday; and a handful of “Mom’s Morning Outs” at 11 a.m. on some Tuesdays. Tickets are $29.50 to $40 and include parking. 954-462-0222; miniacipac.org.