Hilarious “Brothers Beckett” is an “Odd Couple” for Generation Z 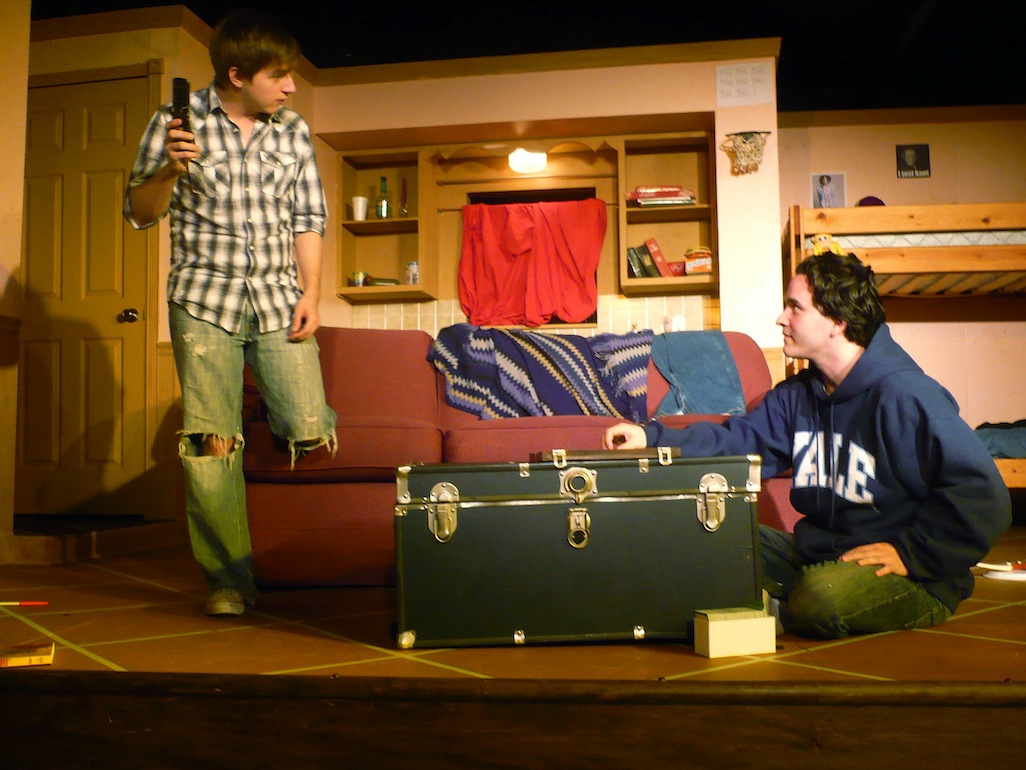 Brothers Beckett is a scruffy teddy bear of a play about twenty-somethings struggling to find something satisfyingly real and emotionally sustaining in a cold world. It’s also nearly as funny as anything South Florida has produced this season.

The world premiere of David Michael Sirois’ play at the Alliance Theatre Lab is a character-driven comedy that thrives on witty banter and fast-slinging cultural references, but which murmurs disturbing questions about a generation of Peter Pans who cannot grow up.

Female interlopers into this co-dependent boys’ club could be more fully fleshed out and the playwright’s theme means that the audience needs to enjoy the journey, not look for a satisfying finale with closure, but that’s Sirois’ choice.

His hilarious script is lifted even further by the driving, ping-pong direction of Adalberto Acevedo and a preternaturally tight ensemble effortlessly riffing off each other’s licks like jazz musicians.

The plot charts a tumultuous 24 hours inside the slovenly Hoboken studio apartment of Brad (Sirois) and Kevin (David Dearstyne). Brad is a handsome and promiscuous Yale philosophy grad whose perpetually out-of-work status betrays fear-of-failure issues. Kevin is a nerdy’puppy dog pushing The Public Theatre in New York City to produce his first play.

Dropping in to kibbitz are their buddies, the even more slovenly neighbor Doug (Mark Della Ventura) and the lovely meteorologist Joyce (Kaitlyn O’Neill) who they treat as one of the boys.

Their homeostasis is upended by the impending arrival of Kevin’s long-distance girlfriend Tuesday (Shira Abergel). Kevin reveals he wants to propose to Tuesday tonight and move out to start a real life.

Brad immediately campaigns to sabotage the relationship by cruelly lampooning her as uptight, shallow and clueless ‘ especially when Tuesday arrives to spend the week. ‘At one point, the friends barge in while Kevin is offering a ring to Tuesday. He moans, ‘Why are you making my proposal a Carol Burnett skit?’

Theater comedy is such a collegial effort that no one truly knows how much of a final performance and the hundreds of bits of business come from the actor, the director or the janitor. Whoever is responsible here deserves credit for inventiveness and a verbal verisimilitude that make you think you’re eavesdropping. The push and pull of the brothers’ banter seems honed over two decades of growing up together.

Doug: How do you guys know all this stuff?

Doug: I went to school.

At one point, the brothers’ argument is nothing but grunts of un-hunhs and unh-unhs like children on a schoolyard. Everyone communicates character and emotional reactions with their body language, but Dearstyne especially enhances his performances with scores of movements such as shaking a leg when he pulls on pants, bouncing on the balls of his toes and a sort of waddle/straddle/walk over instead of around the footlocker that serves as their coffee table.

Which brings us to the performances. One joy for a regular theatergoer is to see someone they thought was merely an adequate actor finally get the right script and the right direction to reveal what they really can do. Earlier this month, we saw Marckenson Charles do it in Superior Donuts. Now it’s Dearstyne, who was just okay in Speech and Debate, but here’proves to be a gifted comic actor with a goofy smile, energetic earnestness, sad eyes and that unexpected body language.

Just as good, just not as showy, is Sirois himself who has a delightfully dry delivery and an almost naturalistic style like Tom Hanks or Jack Lemmon. Della Ventura occasionally has to fight the Alliance Curse of muttering lines and underplaying into invisibility. But most of the time, he’s got the same comic chops as the other two, exuding a good-natured Seth Rogen vibe.

Neither actress was as vibrant or convincing as the three actors. But that might be the fault of the script: The women are just dramatic mechanisms to upset the balance. For instance, we’re never clear why Joyce likes to keep a little emotional distance from her friends or why a germophobe like her would spend 30 seconds in this pigsty.’And we can never see what Kevin sees in Tuesday except maybe a wish to hook up with a spoiled princess.

The script, the performances and Acevedo’s direction effortlessly pack the evening with wry asides that rewards an audience that is attentive and culturally savvy. For instance, Sirois plays a nifty joke all night with the title and the characters’ last name, a smiler that only becomes clear in the final seconds.

Alliance has a spotty recent track record including a misfire in House of Yes last November and a disappointing American Buffalo a few years ago. But Brothers Beckett, the first original script in Alliance’s history, should encourage audiences to see the rest of their season: Sam Shepard’s Fool For Love in June and [title of show] in November.