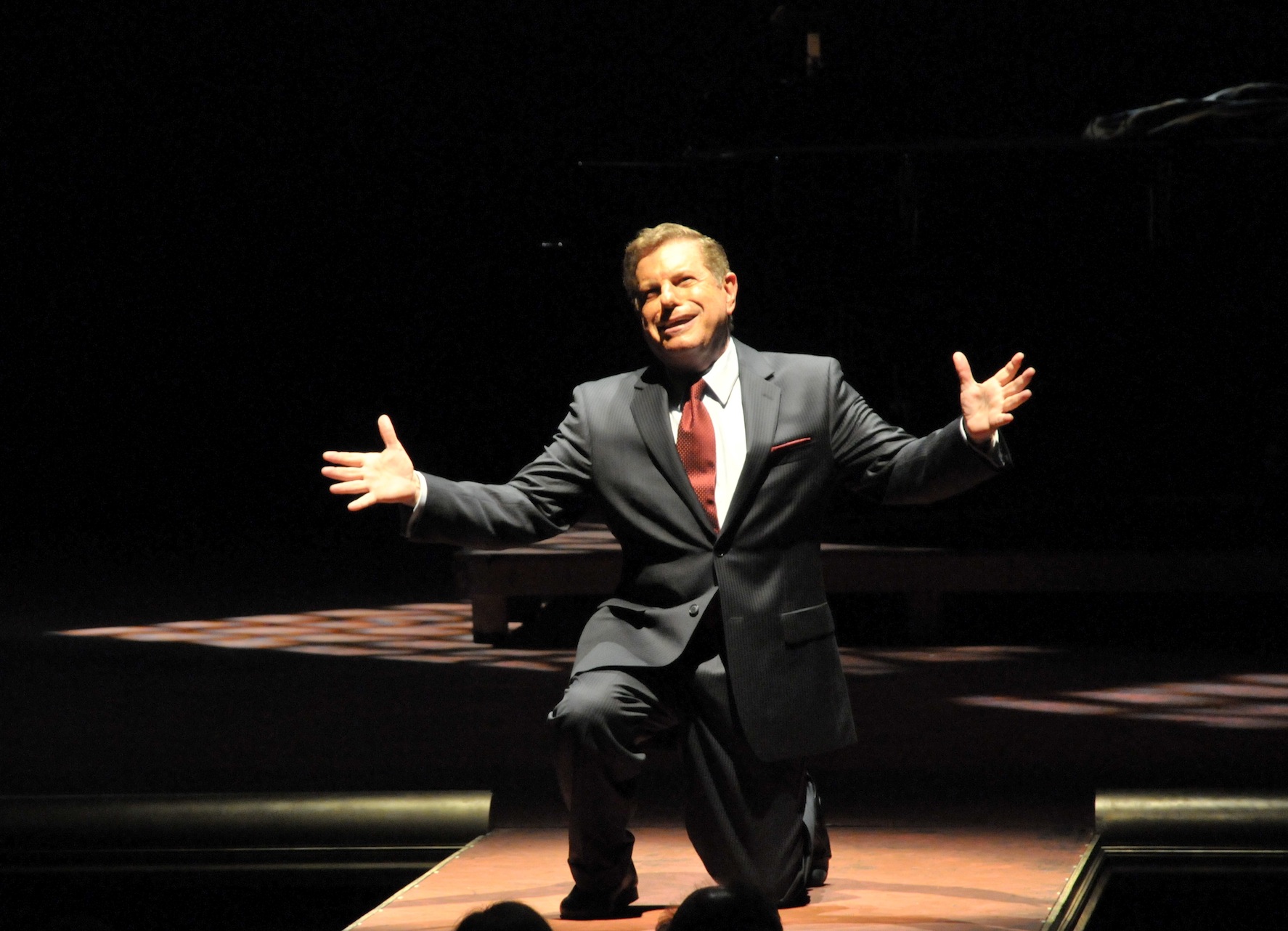 MIke Burstyn stars in "Jolson at the WInter Garden" at the Maltz Jupiter Theatre.

The world premiere of Jolson at the Winter Garden at the Maltz Jupiter Theatre Thursday was exactly what you’d expect: a well-produced songbook revue jammed with familiar crowd-pleasing tunes and featuring a bravura turn by Mike Burstyn as the self-styled world’s greatest entertainer.

Nearly two dozen songs in 90 minutes covered every Jolson standard from Swanee to My Mammy to Rockabye Your Baby to Sonny Boy to’well, you get the idea. But Burstyn and company delivered these sentimental warhorses with absolute respect and not a trace of irony. Given such a loving treatment, the melodious tunes and the heartfelt lyrics didn’t sound corny, simply sincere.

It’s material that targeted the Maltz’s core audience of older patrons so precisely that many sang along with some standards without being asked, transported across space and time. But when Burstyn did come out into the audience to enlist its aid in singing Nothing Could Be Finer Than to Be In Carolina in the Morning, not only did no one have to be prodded, the whole house knew every word of the chorus.

Jolson, for those too young to know, was the preeminent American entertainer in the first half of the 20th century. Starting in vaudeville and minstrel shows, his popularity reached levels previously unknown in popular culture. When he turned to film, it was his voice in The Jazz Singer that uttered the first words heard in movie theaters.

But this is a revue, not a bio-musical, so even though a trio of backup singers pepper the audience with factoids describing Jolson’s accomplishments (‘Al, you were the first person to earn $10,000 a week before World War I’), it simply gives a flavor of his importance and we never see past the entertainer’s fa’ade to the difficult human being who was both adored and despised offstage. ””””””””””””””””””””””””””””””””””””””””””””””””””””””””””””””””””””” As a result, most audience members under 60 may admire this work, even be surprised by how sturdy these songs are when properly presented. But they won’t be moved or enthralled as will seniors who bring a storehouse of memories to the evening and for whom only biographical shorthand is necessary.

The script was written by Burstyn and director/choreographer Bill Castellino in preparation for a national tour. Castellino and musical director Christopher McGovern are co-creators of Florida Stage’s musicals Cagney, Backwards in High Heels and Dr. Radio.

Their slim premise is that Jolson is presenting one of the Sunday concerts that he gave at the famed theater (now home to Mamma Mia!) just before he died in 1950. There’s an alleged surprise to the plot that a sixth-grader will figure out in about ten minutes.

No matter. When the real Jolson grew bored with paper-thin book shows, he reputedly abandoned them in mid-performance and asked the audience if they wouldn’t rather he just sing his hits. Which they did. And he did. And this does.

The backup singers (Laura Hodos, Wayne LeGette and Jacqueline Bayne) get a few solos to allow Burstyn a breather. But the show belongs to Burstyn.

Burstyn, who has played Jolson in another musical, doesn’t look much like the original. But he has Jolson’s prizefighter energy, the endearing pugnacious persona, the showbiz pizzazz and, above all, that voice. Burstyn has nailed Jolson’s strong baritone with that slightly raspy timbre so well that you can close your eyes and wonder whether Jolson has indeed returned from the grave for one night.

Jolson tells the audience that he was basically a salesman and Burstyn, indeed, sells these songs with an assured skill, fists pumping the air, arms outstretched with palms upward.

The Maltz has invested its customary care in producing the work with serviceable, but attractive sets; nimble lighting and a solid eight-piece combo perched on a bandstand, led by McGovern.

Still, Jolson at the Winter Garden gives the audience a chance to watch two men do what they love to do ‘ Jolson and Burstyn ‘ and that enthusiasm is infectious.