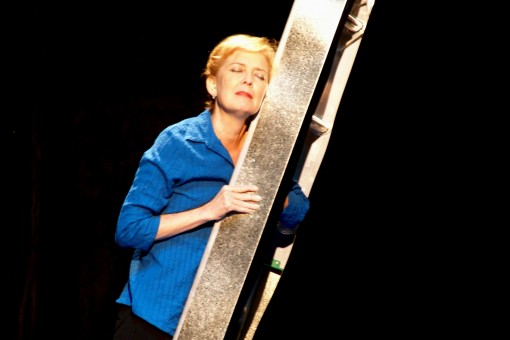 High Dive is the shaggiest of shaggy dog stories, but with Barbara Sloan as the storyteller Saturday at New Theatre, it was akin to spending a delightful hour listening to an unusually entertaining luncheon partner.

Sloan is the narrator in what is essentially a stand-up comedy routine about a woman three weeks away from turning 50 who is terrified to leap off a diving board.

While on vacation in Greece, she is dodging her son’s urgings to jump from the tower into hotel pool. In an attempt to put off the act, she stops to tell us about her other disastrous trips and adventures marked by an earthquake, a hurricane and tornadoes.

It’s a genuinely funny series of tales ranging from nearly drowning a friend while waterskiing to a Captiva trip so cold that fish froze in the water.

The playwright Leslie Ayvazian performed the semi-autobiographical work at the Colony Theater in 2002, but Sloan slips inside the hapless, amiable character with seeming effortlessness.

The cast consists of just Sloan and Alex Eisenberg (or twin brother Zach) as her son. But prior to the start of the show, Sloan enlists 34 volunteers from the audience to read a handful of lines from scripts while sitting in their seats. They portray her husband, in-laws, fellow vacationers and other denizens. The audience participation is a stunt, but it’s a fun one. Theoretically, this should slow the speed and rhythm of the show to a jerky crawl, but it worked perfectly Saturday night as Sloan picked up the cues from enthusiastic audience members drawn into the tales.

It adds a little spice and unexpected humor to Sloan’s droll litany of vacation disasters, figurative and literal, propelled along swiftly by Sloan and director Ricky J. Martinez.

In fact, the stories have almost nothing to do with each other and you sometimes wonder how she gets us from her stint as the first female cable television repairwoman in Columbus to appearing with a drunken Peter Lawford on The $25,000 Pyramid to hooking up Dorothy Lamour’s brassiere in a dinner theater. But the anecdotes are so amusing and woven together so well that you’re too busy laughing to notice.

Given the obvious metaphor inherent in the initial premise, you keep waiting for some epiphany, but it never seems to come. There may be some message about facing your fear of getting older. Maybe it’s that you don’t have to face anything if you don’t want to. The specific take-home lesson isn’t terribly clear and whatever it is, it’s secondary to the theatrical journey.

But Sloan is such good company on that journey that you don’t care. While she is best known as a five-time Carbonell nominee for such dramatic work as the terminally ill professor in Wit, she has finely-tuned comic timing, unflagging frantic energy and an infectious delight in dishing. Her ‘other’ life as a dancer is evident in her ever-changing body language to illustrate every beat of her story-telling.

It isn’t Shakespeare, but High Dive delivers one of the more satisfying shows that New Theatre has offered in quite a while.