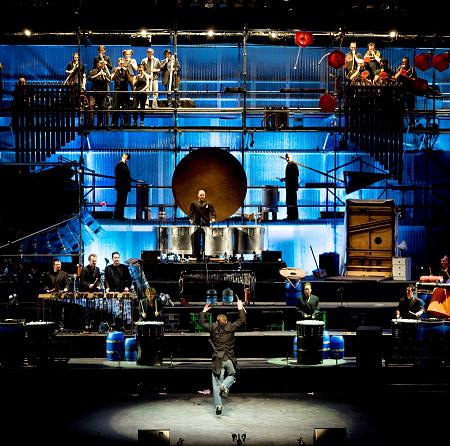 If you close your eyes, the music wafting from the Arsht Center stage occasionally sounds as if an orchestra of oboes and trumpets is playing.

But for most of two hours, Pandemonium delivers a glorious symphony of banging, slapping, toots, hoots, honks, rattles, clanks and bellows because the instruments are Rube Goldberg contraptions made of everything from a steel folding bed to a wok.

Pandemonium, which kicked off its North American tour in Miami on Thursday, is another offbeat brainstorm from director-creators Luke Cresswell and Steve McNicholas who dreamed up the percussion sensation Stomp.

Cresswell appears with the 25-member Lost and Found Orchestra as its ‘conductor’ and sometime soloist, leading the evening with noticeable joy.

The title Pandemonium is completely bogus. The show may seem like anarchy, but it’s as tightly choreographed as a Cirque du soleil trapeze act and features complex music requiring immense discipline and concentration to execute.

Visually, Pandemonium resembles a vagabond troupe of out-of-work musicians who have scavenged a junkyard to jerry-rig instruments akin to recognizable horns or reeds in some cases and unique unearthly creations that have little akin to anything but a Moog synthesizer. They clamber around metal scaffolding, switching among instruments like a marimba resembling a ladder and water cooler jugs filled with dried beans.

The orchestra is primarily percussion or air blown through apertures. But the sound is delivered in so many inventive ways that it rarely gets stale.

There are kettledrums made of soup kitchen vats, performers puffing across the tops of beer bottles, smacking inflated plastic bags and tweaking three rows of bicycle horns. Orange traffic cones become tubas called Plumpets and long rubber tubes connected to funnels create the sound of French horns, dubbed here Hosaphones. Saws are played with violin bows. Two towering pipe organs are made of actual pipes connected to a large makeshift bellows. It goes on and on: umbrellas lined with wind chimes, novelty store cylinders that make sheep and cow noises, rubbing fingers around the top of wine glasses. And finally, there are nearly indescribable apparatuses worthy of Dr. Seuss like the Squonkaphones.

But the novelty of the instruments would simply be a curiosity if not for the music itself. The sound leans heavily on percussion and repetitive musical patterns. It echoes Philip Glass, Stravinsky, African tribal dances, Prokofiev, and Windham Hill stylists like Shadowfax as well as the pioneering musical anarchist, Spike Jones. Be warned, this is not everyone’s cup of tea (although they did use teacups), so the unrelenting percussion and abstract music might wear out its welcome with some listeners before the night is over
.
The musical pieces are usually constructed as they were in Stomp: They start out slow and simple with one or two instruments. Then other instruments are added and the music grows in both volume and complexity under it rolls over the audience like a tsunami.

In several of the early numbers, each performer played a single note such as slapping down a rubber radiator hose. Then, like vaudevillian bell ringers, they slip in their specific note at just the right moment. A single line of unadorned melody morphs into something sophisticated with counterpoint and harmony.

The whole thing might be treated by Cresswell and company as a light-hearted romp. But listen to the music as if you didn’t know what was making the sound; its integrity will surprise you.

The unsung heroes are the sound designers and technicians. The sound in the Ziff Ballet Opera House was so balanced, so clear, so defined that you could hear a rod striking a glass bottle at the back of the stage even when the full orchestra was playing. Technicians said they had a week to get it right and few visiting shows have that luxury, but it paid off.

The Pandemonium tour moves from here to Raleigh, N.C.; Washington, D.C.; Chicago, and Boston, with layovers penciled in for Los Angeles and San Francisco. Bet on the last sound heard at every stop being the percussive beat of hands clapping.