Report From New York: Yeah, Hamilton Is The Game Changer

Posted on December 2, 2015 by Bill Hirschman 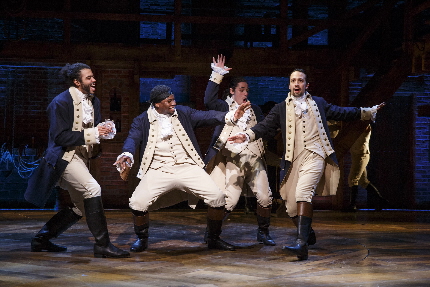 We’re back from our trip to New York to scout out productions you might want to see (or not), shows that might tour South Florida and scripts that might be worth reviving in our regional theaters. We will run our reviews intermittently over the next two weeks. The shows include: On Your Feet!, Hamilton, King Charles III, The King and I, An American In Paris, Fool For Love, The Curious Incident of the Dog in the Nighttime, Dada Woof Papa Hot and Allegiance. Links to other reviews can be found at the bottom.

Forget, if you can, the hype. Forget that you can’t get a ticket until the spring. Forget the phenomenon, the 60 Minutes profile, the appearances on late night talk shows.

From the defiant, fierce and joyful opening phrases about a bastard immigrant destined to become “a hero and a scholar,” Hamilton proves itself an electrifying game changer in the world of musical theater – and then continues to do it for another 2 hours and 45 minutes.

No, it is not the Second Coming as many overheated observers would have you believe, but it is a watershed work that may well transmute mainstream theater for a decade to come.

Lin-Manuel Miranda has eclipsed his artistic and popular success of In The Heights with the most unlikely elevator pitch since a couple of Frenchmen suggested making a musical of Victor Hugo’s doorstop novel about the existence of God, Les Misérables.

For the 42 of you living in the Amazon rain forest for the past year, Miranda saw stunning parallels between founding father Alexander Hamilton depicted in a biography picked up at an airport, and its resonances with the social, political and cultural zeitgeist of today. He funneled the factually accurate biography through a hip-hop/rap score and familiar theatrical tropes with an assured confidence that marked him as a fire-bringer for the future of theater.

The result bowing at the Public Theater last season was a mostly sung-through musical about the founding of this country, alternately very funny and profoundly moving, with a seminar-full of insights about the American character — where we came from and who we are today.

Now on Broadway, its resonances are legion: Youths’ drive to accomplish something before their time runs out at any moment, callow declarations like New York being the greatest city in the world, frustration battling the slow-moving establishment, the fate of the country decided in exclusionary backroom deals, a perpetual sense of never being satisfied, the sense of living in a time of revolution (that should resonate with the Millennials’ parents), inviolable ideals deteriorating in the face of pragmatism, the contribution of immigrants to the young nation, and the sense that the world has been turned inside out — a source of both fear and opportunity.

Like Hair, Jesus Christ Superstar, Rent and Spring Awakening, this indeed welcomes an audience that never would have been caught dead watching a musical. But it’s more of a game-changer than simply bringing in a desperately-needed multi-ethnic audience under 60 years old.

Specifically, this would seem an intentionally disconnected clash of a mid-20th Century art form and a 21st Century score, of an allegedly only-today-matters generation and a multi-faceted history lesson rooted two centuries earlier, of a diverse cast with ponytails and Afros deftly performing century-old theatrical skills associated with Anglos, WASPs and Jews.

But the exact opposite is true. The genius of the piece is how it melds those facets — not mashes them. It finds genuine reverberations that make aficionados on all sides not only see the relevance of each, but revel in that surprisingly shared experience. Because make no mistake: Hamilton is a good ’ol American musical theater in construction, sensibility and its highly polished precision execution. Miranda comes from, reflects and incorporates a wide variety of influences including growing up listening to original cast albums and venerating Stephen Sondheim.

But what makes it especially a game-changer is the nature of the storytelling on steroids. Sondheim and others have said for decades that a creative team must labor to make a good lyric, a good musical theater scene as comprehensible and digestible as possible on the first hearing and viewing.

But in Hamilton, boxcars of crucial exposition fly past like a freight train. Years are conflated into a few sentences. Relationships are introduced in a few words and then they’re gone. For an audience alleged to have generation-wide ADHD, this is not The Lion King that allows you to watch passively. This requires complete involvement and rapt attention if you are not to miss the content and the artistry of the verbiage rushing past like a whitewater torrent.

Frankly, while it is not essential, listening to the two-CD set a half-dozen times will enhance your appreciation when you finally get into the theater. But there are rewards. A local colleague says that her appreciation has only deepened by repeated playing of the music, leading her to say it may be the best musical of the past 10 years.

You do not have to like hip-hop, rap or any other genre especially, since the score spreads to other forms as well. The vibrating music is infectious and the lyrics scintillate in a celebration of art and intelligence that embraces tongue twisting displays of verbal pyrotechnics and deeply felt poesy.

Miranda is not alone in this creation. He’s reunited with his In The Heights team of director Thomas Kail who brings a sense of profound drama and broad comedy, choreographer Andy Blankenship and musical director/orchestrator Alex Lacamoire who attended the New World School of the Arts. The choreography and staging is as kinetic as the score – but has far more of a Broadway vibe than you’d expect.

The performances are passionate and accomplished down to the hardworking ensemble who never seem to get much of a break. Miranda, of course, is simply one with the piece, especially Hamilton’s unsatisfied ambition racing against the clock as if he knows his life will be cut short in a duel. But this is not a vanity piece; he leaves the stage often and cedes the spotlight to the other leading players. 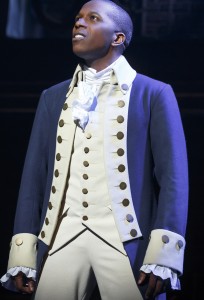 Just a few: Leslie Odom Jr. is enthralling as Aaron Burr who narrates the story because he and Hamilton’s lives intertwined repeatedly. Plus Andrew Rannells of Mormon fame, subbing for Jonathan Groff as King George; Phillipa Soo as the hero’s long-suffering wife, Eliza; Renée Elise Goldsberry as Eliza’s sister Angelica who carried a torch for Hamilton, and Daveed Diggs as Lafayette and in a completely different mode Thomas Jefferson.

Part of the power of the experience in this production is the unspoken pride of the cast and the audience that we are sharing something special beyond the latest Andrew Lloyd Webber show down the street. An interview we did with Odom after a matinee revealed that he, and others, are aware that they are part of a phenomenon that will likely not be repeated in their careers.

Other than the lottery held before the show, tickets are difficult to get before next spring. But the good news is the producers are already beginning to cast a national tour. Like the original stars of The Book of Mormon, Miranda may be a draw, but the treasure here is the material not the admittedly superb cast on Broadway right now. So the keys are (I hope you are listening, producers) first, finding cast members who enunciate as clearly as this crew, and two, being almost insanely scrupulous about the quality of the sound in the presenting houses you visit.

To read our review of Fool For Love: click here

To read our review of review of Allegiance, click here

To read our review of The King and I, An American In Paris and Curious Incident of the Dog in the Night-time, click here. 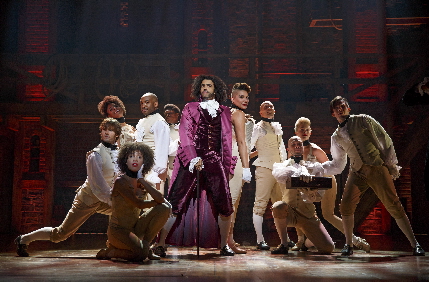