Report From New York: Allegiance The Musical Could Have Been Far More Incisive 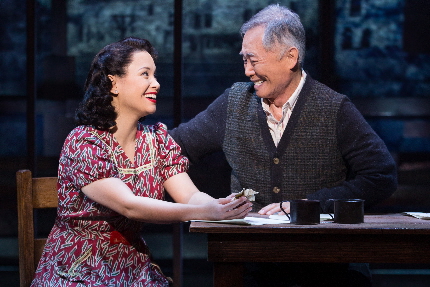 Allegiance, the story of a Japanese-American family rent apart by their internment in World War II, has the potential to be a great play. Unfortunately, it’s a musical.

It’s not an awful musical other than one facet, just a mediocre one. Every time the narrative closes in on an insightful dramatic moment, somebody breaks into song. Not just a song, but a barely adequate tune with cripplingly banal lyrics, neither of which advances the plot and rarely tells us something unique about the characters.

Yet, the show is delivered by a strong acting corps led by a reasonably decent director and backed up by a polished Broadway production team. It’s a lot of effort lavished on a weak property.

Since its opening October, of course, its tale of unthinking fear-driven xenophobia has been given unfortunate resonance by unthinking fear-driven xenophobia comments making headlines in the current political campaign. It’s titular star, TV’s George Takei, whose childhood informed and inspired this fictional tale, has even invited He-Who-Must-Not-Be-Named to see the show and get an object lesson in the reality of his bombast.

But the finished product veers wildly between occasionally intriguing devolving to beyond predictable and utilitarian, no matter its noble and laudable intent. Worse, it’s never thrilling or especially moving.

Allegiance opens in 2001 with an elderly Japanese-American Sam Kimura (Takei) putting on the American Army uniform he wore leading a suicide brigade during World War II. News that that his estranged sister Kei (the still luminous Lea Salonga) has died transports him back to his youth in California where his father (Christopheren Nomura), a thoroughly assimilated first-generation American, is a successful farmer in Salinas.

But after Pearl Harbor, the government confiscates their homes and business, and packs the entire extended family to a concentration camp in Wyoming including Sam’s venerable and wise grandfather, Ojii-chan (Takei once again). Among the ironies is that like other immigrant groups, a large contingent have worked hard to merge into the fabric of their adopted land while honoring their heritage, buying into the implied deal that loyal, hard-working newcomers not only can be successful but accepted as full fellow citizens.

The government’s repression splits the community – and the Kimura family — into those wishing to fight for their country, like the young Sam (Telly Leung), and those refusing to sign an insulting document swearing allegiance to the United States. Some of the latter are hotheads like Frankie (Michael K. Lee) but others are simply proud people who consider themselves proven Americans like Sam’s father. The latter pay for their pride.

The issues of the piece are wisely filtered through the eyes of a loyal family with three generations in the country. The story is focused as intently on the damage the edicts do the family’s relationships as much as it examines the inexcusable cost to their economic and emotional well-being. While the Japanese-Americans are not stereotypes, of course, the script swings over and over to dramaturgical and playwriting clichés. Sam falls in love with the whitebread nurse at the camp – about as doomed a relationship as anyone might imagine; the camp guards are all one step away from slobbering Neanderthals.

And just when you’re about to give up, Allegiance delivers a brief flash that you wish was emblematic of the rest of the show. The best comes halfway or so in the second act when all of the community is gathered and hears a radio report that a bomb was dropped on Hiroshima. They stand stock still, enveloped briefly in a blinding white light. The audience is suddenly thrust deep into the Japanese-American community’s terribly conflicted emotions: They have spent years trying to establish their loyalty to America and their total dissolution from the Japanese Empire other than their culture. But clearly the idea of hundreds of thousands of Japanese people and an entire city being wiped out in an instant of agony gives rise to an unexpected ambivalence.

Obviously, there’s a cause for quiet cheer that anyone would even tell this tale on a Broadway stage – due primarily to the personal investment of Takei who has built upon his Star Trek popularity in recent years as a witty and incisive commentator on social and political issues. Leading an all-Asian-American cast and primarily Asian-American creative team, Takei acquits himself convincingly in his first Broadway role – although his secondary parts aren’t especially demanding.

He almost disappears behind the outstanding talent of the beloved Ms. Salonga whose ability to act within a pristine vocal delivery is enviable, and the vibrant Leung, best known from the TV show Glee but who has paid his dues in several Broadway shows and tours.

The problems are the overly-reverent schematic script by Marc Acito, Jay Kuo and Lorenzo Thione (it took three people to cobble this?) and the Frank Wildhorn-style by-the-numbers score and the truly prosaic lyrics by Kuo.

The tragedy here is that, indeed, this is fertile ground for a theatrical cross-examination of not just how white Americans act under threat, but how families cope with such adversity. But it will take a different creative team to make Takei’s family story’s land with the complexity it deserves. This show will likely limp through the holidays at the Longacre Theatre but it’s not likely to last into the spring. 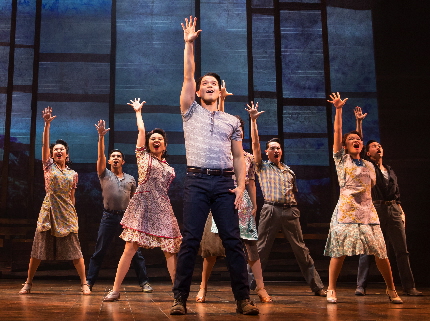