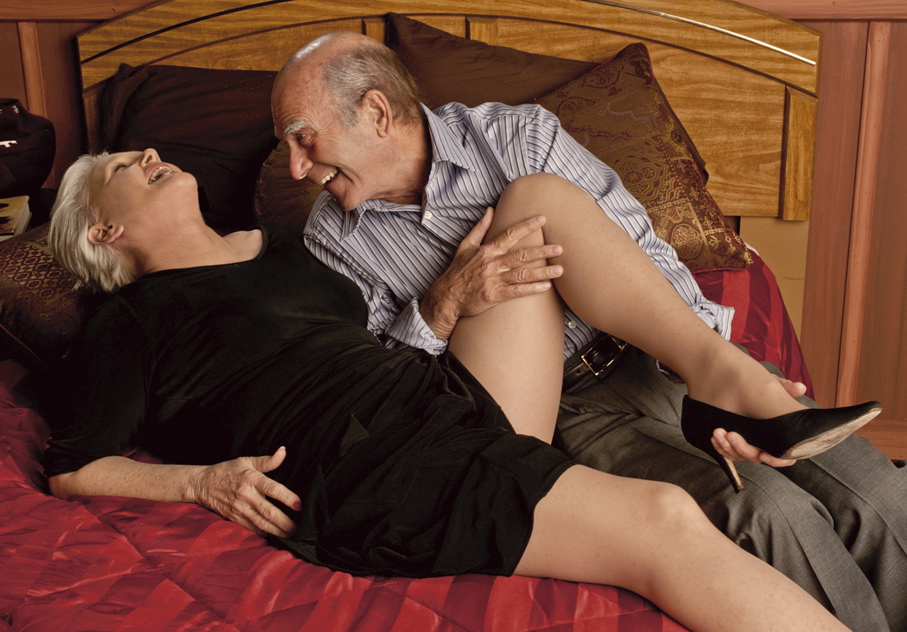 As droll and insightful as the GableStage production of A Round-Heeled Woman is on its own merits, Sharon Gless brings a surprising dimension to the 66-year-old English teacher who advertises for sex in the New York Review of Books.

But what Gless exposes with the briefest glance of fear or a quaver at the end of a sentence is vulnerability. We can see her scraping away protective barriers so that she can experience life, whether it be pain or joy.

There was no visible shred of the self-confident detective from Cagney & Lacey or the blustery Mattie from Burn Notice at Saturday’s opening. When she explains to her girlfriends, ‘I haven’t been touched in 30 years,’ she trembled at the starkness of the statement that scared her as well as us.

Under Prowse’s direction, Gless’ Juska is a recognizable neighbor as terrified as any of us would be hazarding our self-image, self-worth and self-respect to search for human connections.

And because of that, Gless and Prowse win us over from the opening scene in which we discover Juska nervously experimenting with phone sex, unconsciously stroking herself as she jokes with the caller.

The meat of the play is the engaging travel guide narrating an account of her first year following the moment she placed the ad: ‘Before I turn 67 ‘ next March ‘ I would like to have a lot of sex with a man I like. If you want to talk first, Trollope works for me.’

Prowse’s script tracks initially comic–but not cartoonish– encounters with older and younger suitors, some of which go south and wreak emotional damage. Before one tryst with a stranger, she tells anxious friends, ‘If you don’t hear from me in three days ‘ be happy for me.’

Virtually everyone in this play is not only offbeat but carries around a complete set of American Tourister baggage. Juska divorced her first husband, had difficult relations with her parents and is estranged from her adult son.

While many good actresses could do this role, Gless is a marvel unique to herself. Her engaging, winning persona instantly captures and keeps the audience in thrall. Her Jane Juska is simply someone you want to spend time with. When she strips down to a black leotard at one point, revealing a body not as svelte as when Gless was a gorgeous contract ing’nue in the studio system, it is a silent, subtle and courageous announcement by Gless and Prowse that self-worth should not be tied to an impossible body image. You want to cheer.

Although Gless has done stage work, she has logged most of her career on TV where you only have to perform for a minute or two at a time. So it’s saying something that she remains inside the character and holds the audience for an uninterrupted hour and a half.

She’s supported by a strong troupe of local actors filling numerous parts, including Stephen G. Anthony and Howard Elfman as various lovers with different hangups; Laura Turnbull as a close friend and Juska’s hard-edged mother, and Kim Ostrenko as the imaginary embodiment of Juska’s favorite heroine from Anthony Trollope’s Victorian romance novel, Miss Mackenzie. Best of all, Antonio Amadeo provides a gallery of characters ranging from Juska’s troubled son to a suitor half her age.

Prowse as both playwright and director miraculously nails an elusive tone for Juska’s character and the play: self-deprecation but not self-pity, gentle but uninhibited humor, thoughtful without pontificating. This is an adult sex comedy, not adult just because of subject matter and language, but because it has a mature attitude that deals head-on with every question, every cliche, every snide snicker, every challenge that the situation might produce.

As playwright, Prowse has deftly tweaked Juska’s episodic memoir into satisfying theater with a dramatic arc. One success is the penultimate scene in which Juska tracks down her estranged son in hopes of a reconciliation. The scene is barely touched upon in the book, but Prowse’s imagined extrapolation gives the evening the needed push toward the play’s peaceful coda.

As director, Prowse accents the evening with imaginative staging, especially the sex scenes. In one comic encounter, Amadeo slithers around the stage as a sleazy dancer whose moves echo the coupling under the sheets; the humor defuses the audience’s discomfort. In another, Juska stands in a spotlight silently displaying her reactions to the first sex she’s had in decades ‘ expressions morphing from fear to surprise to pleasure to nervous laughter to relief.

At its heart, this is not simply a play about society’s myopia about sex after sixty. It’s a fable about jettisoning your fear and going after the marrow of life.

Piece by piece, Juska discovers enough about herself that she can reconcile and repair portions of her life. As a result, she may or may not have found a man she liked to have sex with by the end of the play, but she has discovered a person she does like ‘ herself.