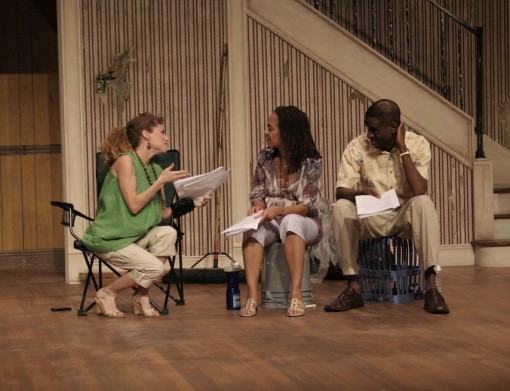 The two major openings this weekend each explore sensitive topics: sex after sixty in A Round-Heeled Woman at GableStage, and race relations in Clybourne Park at the Caldwell Theatre.

Clybourne Park is a message comedy with an intriguing premise, The first act occurs in 1959 in a white housing project where a black family is about to move in, the family being the Younger clan featured in Lorraine Hansberry’s classic drama, A Raisin in the Sun.’The second act occurs in 2009 as the now predominantly minority neighborhood faces a white couple moving in to gentrify the block by building a McMansion.

Director Clive Cholerton chased after the rights to Bruce Norris’ script for months, calling it one of the best he’s ever read. It received rave reviews in New York last year, had a successful run in London and is being produced in regional theaters around the country.

‘It talks about how far we’ve come in race relations and how far we haven’t come,’ Cholerton said. ‘It shows how difficult it is now to have a conversation about race relations. Because of political correctness, there’s almost nothing you can say.’

GableStage presents Sharon Gless in Jane Prowse’s stage adaptation of Jane Juska’s book,’A Round Heeled-Woman, which has its official opening Friday, but has been in previews since New Year’s Eve. (See interview here.) Early word of mouth has been promising about the play in which a 66-year-old woman who had not had sex in 30 years sets out to make up for lost time ‘ and discovers a fulfilling life along the way.

Likely the most unusual new show is Confessions of a Jewish Shiksa . . . Dancing On Hitler’s Grave. Frannie Sheridan’s performs her one-woman autobiographical play about growing up in a Jewish family in Canada that pretends to be Ccatholic. The show opens Friday and runs through Feb. 12 at Area Stage Company in Coral Gables.

On Monday only, the embryonic State Theatre Project will hold a fundraiser performance called Nictor/Nictoria at the GableStage kindly donated by Joe Adler. The vaudeville-inspired one-woman show, written and performed by Shira Abergel, presents a ‘dynamic duo who do everything from singing and dancing, to boozing and losing.’ State Theatre Project will unveil its first mainstage production,’Billboard, on Jan. 13.

A restaged and slightly more modest national tour of Beauty and the Beast plays through Sunday at the Kravis Center.

The Off Broadway in Broward series offers Cooking With The Calamari Sisters from Thursday to Sunday at the Broward Center’described as what happens when “failed dishes and food fights ensue during this live broadcast of a public access cable cooking show.’