Posted on November 1, 2010 by Bill Hirschman 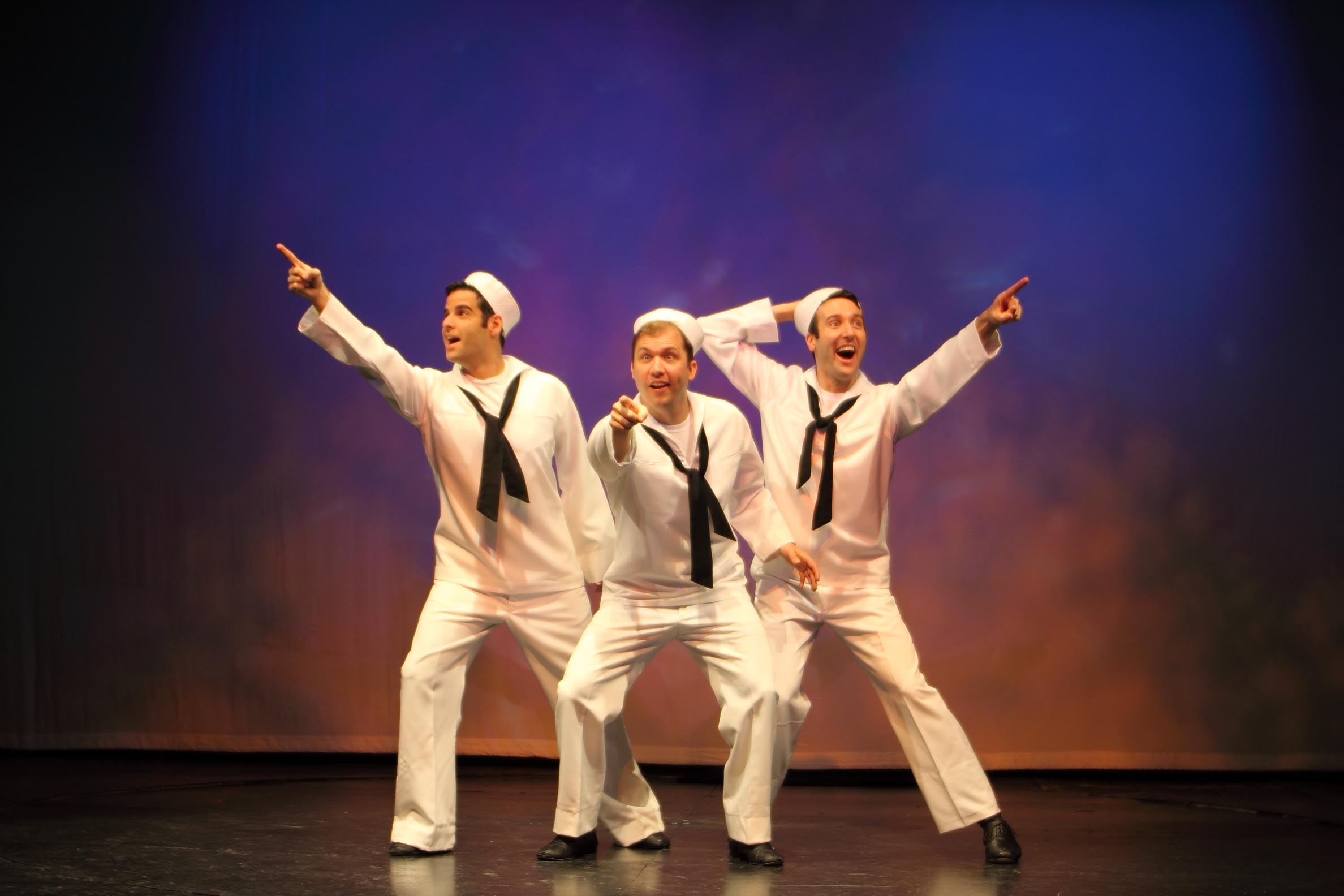 Joey Zangardi, Tyler Fish and John Ramsey in Broward Stage Door's production of "On the Town."

Sailors on leave in the big city for 24 hours.’ It’s a premise that hold the promise of adventure and misadventure, of comic situations and romantic entanglements. And that’s the basic plot of On the Town, the musical now playing at Stage Door Theatre in Coral Springs.

The original production of On the Town had a dream team behind it’music by Leonard Bernstein, book and lyrics by Betty Comden and Adolph Green, choreography by Jerome Robbins and direction by George Abbot. It premiered on Broadway in 1944 and ran for more than 450 performances. (Comden and Green also appeared in the show as Claire DeLoone and Ozzie.) It was based on Bernstein and Robbins’ ballet Fancy Free, about three sailors on 24-hour leave in New York City during World War II. Robbins’ ballet became an integral part of On the Town, with some of the story being told exclusively through dance.

On the Town was made into an MGM musical in 1949, starring Gene Kelly, Frank Sinatra, Jules Munshin, Ann Miller, Vera-Ellen and Betty Garrett. The film replaced all but three of the original musical’s songs, so those expecting to see a live version of the movie may be disappointed.

The Stage Door production starts out well enough’the recorded tracks of Bernstein’s music sound wonderful, as the clever, abstract scenic design by Stage Door Scenic and Tim Webb brings a chaotic, off-kilter version of 1940s’ New York City to life. A trio of sailors Chip (Tyler Fish) Gabey (John Ramsey) and Ozzie (Joey Zangardi) are eager to see the sights and enjoy some female companionship. While riding the subway, Gabey becomes smitten after he sees a poster for Ivy Smith, aka Miss Turnstiles (Nikki Allred), and the sailors agree to split up and scour the city in search of her. Along the way, Chip meets aggressively amorous cab driver Hildy (Erin Romero) and Ozzie falls for aggressively amorous (and engaged) anthropologist Claire DeLoone, who join the search for Miss Turnstiles.

The couples are well-paired.’ Zangardi and Powell dance well together, while Fish and Romero exhibit the most chemistry. Allred and Ramsey do a nice job as the show’s centerpiece couple, and it’s not their fault that their romance isn’t as interesting as the other two.

Romero is the standout as Hildy, especially when she belts out her big number, the double-entendre-filled I Can Cook Too. Her comical expressions, her no-nonsense delivery, and her way with a song make Romero one of the best reasons to see On the Town.

Unfortunately, she is one of the only reasons to see it, because On the Town fizzles more than sizzles. The cast does its best, but the caliber of dancers is uneven, and that’s especially noticeable during the ballet sequences. The theater’s stage is too small to handle the larger dance numbers, and the cast looks crowded.’ Allred and Powell are stuck in awful wigs’with Allred’s looking off-center in some scenes during Sunday’s matinee. The pacing between the musical numbers is too slow, so most of the comic lines fall flat.

Ultimately, On the Town lacks the sparkle needed to make it ‘a must-see production.