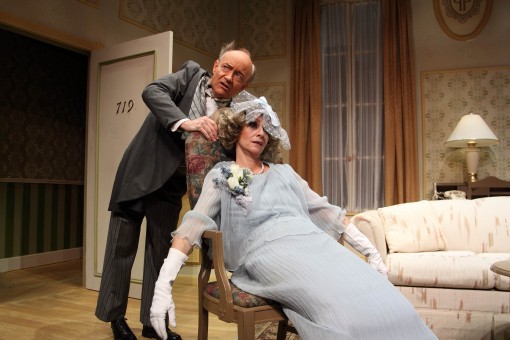 Plaza Suite has been staged a multitude of times since its Broadway debut in 1968, the subsequent introduction to the masses on film in 1971, and a television adaptation in 1987. The challenge today for any theater group that would take on a production of the Neil Simon comedy would be to bring freshness to a play that’s been done to death.

Surprisingly, Broward Stage Door Theatre in Coral Springs accomplishes this, and then some. The production owes its success to well-paced direction by Michael Leeds and an eager cast that approaches each character with originality.

In Act One, Derelle “Dee” Bunn and Kevin Reilly play Sam and Karen Nash, a middle-aged couple who are spending the night at the hotel while their house is being painted. Karen, however, has a motive in mind for booking that particular suite. She believes the change of scenery might get her workaholic husband out from under his papers and rekindle interest in their marriage. It’s also the suite where they spent their honeymoon 24 years ago.

As the first story unfolds, emotions run from light-hearted to heart-breaking as the bored housewife tries every tactic to get her hubby to pay attention to her. In the end, the suite stay leads Karen to the discovery of what’s really behind the decomposing state of their marriage.’Bunn has a breezy style that pairs well with Reilly’s uptight portrayal of the harried Sam Nash. Both bring the necessary rollercoaster of emotions that are required of this scene, which is the most serious of the three acts.

Act Two fetched the most laughs at Stage Door’s opening night. Bill Dobbins is “big time Hollywood producer” Jesse Kiplinger who has come to New York to forget what he’s left behind in Los Angeles: three failed marriages. He’s rung up his old girlfriend, Muriel Tate (Courtney Cameron Reed), from their hometown of Tenafly, and he has more than reminiscing on his mind. Meanwhile, the suburbanite has been following her old flame’s career for the past 17 years with the rabid attention of a celebrity stalker.

Dobbins’ appearance creates the first burst of hilarity in a tie-dyed leisure suit and white patent leather shoes. Reed, with a red flip hairdo, wearing a pink and green shift dress, plays the suburban housewife to the hilt. The two play well off of each other, and both are able to find just the right balance to ensure that the stereotypes don’t escalate into caricatures.

In Act Three, Suite 719 is the setting for bridal preparations. All should be progressing as it should until the mother-of-the-bride, Norma (Margie Elias Eisenberg) realizes that bride-to-be, Mimsey (Danielle Tabino, who pulled double duty also playing Jean McCormack in Act One), has locked herself in the bedroom suffering from a case of cold feet.

Michael Douglass plays the father-of-the-bride who is called to coax Mimsey out of the bedroom. Douglass could have taken the easy way out and phoned in a carbon copy of Matthau’s Roy Hubley, as many actors have been guilty of when charged with this role. But here Douglass gives audiences a wholly original portrait full of physical comedy to guarantee heaps of belly laughs. Eisenberg holds her own, making sure that Norma’s lines get the attention they deserve amid the raucous chaos.

Rounding out the cast is Sam Sherburne who stays busy in all three acts as Bellhop, Waiter and Groom.

Simon’s play in the 21st century shows its age: It’s a bit difficult to believe that Karen and Sam Nash are in their late 40s and dated references to Otto Preminger, Frank Sinatra and Mia Farrow don’t pack much punch nowadays.

Nevertheless, Simon’s hilarious one liners and relatable stories of relationship foibles are timeless.