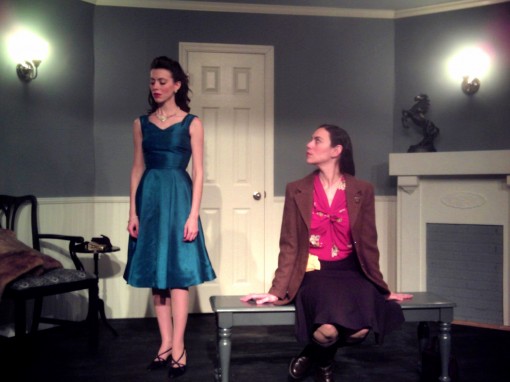 Katherine Amadeo (left) as Estelle and Deborah L. Sherman as Inez in Naked Stage's production of Sartre's "No Exit."

What is your idea of Hell?’ Your definition of torture?’ How will you spend eternity?

These are the ideas explored in Jean-Paul Sartre’s existentialist masterpiece No Exit, which is currently being treated to an intense production by Naked Stage in Miami Shores.

First produced in France in 1944, No Exit looks at three deceased persons’a journalist, a postal clerk and a high society matron’locked in a room together. They are actually in Hell, and while they each expect the clich’d stories of torture to befall them, no torturer arrives. At first they wonder why they were chosen to be locked up together. They pass the time by talking and fighting, extracting confessions of each others’ sins and seeking validation. They soon realize the premise of Sartre’s celebrated quote: ‘Hell is other people.’

Codirectors, and Naked Stage cofounders, Antonio Amadeo and John Manzelli have tapped a talented ensemble for No Exit.

Mark Della Ventura has a few short scenes as the valet who brings each of the characters to the room, but his overly jovial manner and maniacal smile speaks volumes.

Andy Quiroga plays Cradeau, the journalist whose sin is cowardice and callousness, and the first arrival in the room. Quiroga is a powerful performer, at his best when he locks horns with his cellmates, either defending his earthly actions or seeking redemption for his biggest transgressions.

Deborah L. Sherman, who plays lesbian postal clerk Inez, is the second person to arrive. Inez is the only one of the three who is honest about her human failings and sins. She freely admits she is a cruel person. And she is the only one who can see through the moral masks the others try to wear. Sherman was born to play this character. With her rail-straight posture and stern expression, she snarls and spits and hisses each line, imbuing Inez with venomous glee.

Katherine Amadeo, one of the Naked Stage founders, plays the final arrival, Estelle. Beautifully costumed by Leslye Menshouse in a luxurious deep green dress and fur coat, she looks every inch the spoiled, entitled society woman. Estelle becomes something of a brass ring for Cradeau, who sees her as a path to restore his lost masculinity, and Inez, who looks at her with the hungry eyes of a sexually starved woman. Amadeo is heartbreaking during a monologue in which she watches life on earth move on without her.’ She skillfully displays a gamut of emotions in those short moments’fear, joy, anger, disdain, grief.

Antonio Amadeo’s scenic design’a box complete with three walls and ceiling, painted gray and white with black furniture and a chandelier’gives the audience a voyeuristic peek into the characters’ afterlife.

The fact that the air conditioning broke down before Saturday evening’s performance was a mixed blessing. While the heat lent itself to the atmosphere of the play, the hum emitted by the portable cooling unit placed in the back of the tiny venue was distracting and often muffled the actors’ lines.

By the end of this fine production of No Exit, you might reconsider your image of Hell, and ponder with whom you’d be forced to spend eternity.