Playhouse’s Noises Off Is Inherently Funny, But Uneven 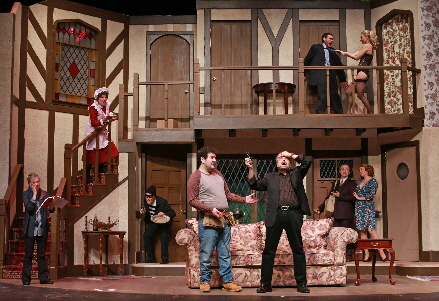 Even if you haven’t attended one of the dozens of productions of Noises Off,  you know what kind of show you’ll be seeing as soon as the curtain opens on the living room of an English country manor house – with eight doors.

Michael Frayn’s script and many productions of the 1982 play have earned its status as one of the funniest farces written in the English language – with or without door-slamming. The tale of a theatrical production falling apart before your eyes is the grandfather of the current Broadway hit The Play That Goes Wrong.

Any regular patron of Actors Playhouse in Coral Gables knows that this kind of material constitutes a perfect match with the detailed-oriented comic talents of Artistic Director David Arisco and his top-drawer cast.

Inarguably, the laughs are plentiful in the second third of the play as this talented crew indulges in hundreds of finely-timed slapstick bits and riotous horseplay.

But to be frank, when seeing this with a somnambulant unresponsive audience on Sunday afternoon, this production didn’t wring everything out of this piece that you’ve seen done elsewhere. They seemed to need more than the criminally-meager two weeks rehearsal to find the right pacing for the less manic first act and to keep the insanity of the third act from devolving into a frantic mess. Audience members were still chortling, but not to the level this play is capable of eliciting.

Oddly, the second act, which is by far the most difficult because it’s mostly  pantomimed physical comedy, is the one they nailed with so much skill that the audience couldn’t help but respond with belly laughs.

The play is divided into three parts: The first finds a troupe of worn-out second-rate actors rehearsing a dog-eared British sex farce Nothing On. It’s midnight before opening night and the cast is flailing through a technical rehearsal that should have occurred days ago. Far truer to real life than civilians know, entrances are missed, lines dropped, props misplaced, actors disappear and tempers flare in a hilarious expose of how your theatrical sausage is made.

It’s a strange collection of archetypical theater folks recognizable to any insider: Dotty Otley (Annette Miller from August: Osage County), a hoary stage veteran currently reduced to guesting on television, plays the put upon maid. Frederick Fellowes (Terry Hardcastle) is the genial, ineffectual and none-too-bright middle-aged leading man who faints at the sight of his own blood.  He plays alongside Belinda Blair (Lindsey Corey) a former ingénue with a cheery Pollyanna optimism. Selsdon Mowbray (Peter Haig) is a half-deaf senile alcoholic who likely acted with Sarah Bernhardt in his youth. Garry Lejuene (Daniel Capote) is the stuttering younger leading man who cannot construct a complete sentence off stage and is having an affair with the older Dotty. His scene partner is Brooke Ashton (Betsy Graver) whose primary thespian qualities are that she is having an affair with the exasperated and sarcastic director Lloyd Dallas (Gary Marachek). Backstage is populated by the harried assistant stage manager Poppy Norton-Taylor (Jeni Hacker) and company stage manager and dogsbody Tim Allgood (Mark Della Ventura.)

The first act is mildly funny in a Murphy’s Law vein, although it is the weakest part of this production. Frayn’s hilarious dialogue is delivered precisely by the cast, but it just doesn’t land as well as it can.

That said, the second act, a month later in its tour (identified by Arisco at the Jackie Gleason Theatre in Miami Beach) is this production’s strength. The two-story set designed by Tim Bennett swivels around and we see the trouble-plagued first act from behind the scenery. (Sound designer Shaun Mitchell smartly has the dialogue audible but muffled as it seeps through the set.) With various “showmances” falling apart among the troupe, people use the time between entrances to further grudges and slights (nearly killing each other) all done silently because the deteriorating play is audibly underway on the other side of the set.

The third act occurs on stage again about six weeks later, at the end of the run in Cleveland. The toxic afterglow of the shattered relationships sends Nothing On into a disaster of biblical proportions. The meltdown is quite funny, but the unfocused chaos doesn’t have the punch of the second act.

The biggest mystery in this production is why the turning around of the large set on a turntable – a nice exhibition of theatrical magic — is done in darkness.

Noises Off is a difficult show to pull off, requiring daunting tasks of memorization not just of lines, but of split-second choreographed stage business. To do it this well with such limited preparation is impressive and there are copious reasons to guffaw, but it’s been done better.

Noises Off  plays through Feb. 4 at the Actors’ Playhouse at the Miracle Theatre, 280 Miracle Mile, Coral Gables. Performances 8 p.m. Wednesday-Saturday, 3 p.m. Sunday. Running time 2 hours with one intermission. Tickets $57-64. The theater offers a 10 percent senior discount rate the day of performance and $15 student rush tickets 15 minutes prior to curtain with identification.  Visit actorsplayhouse.org or call (305) 441-4181.

4 Responses to Playhouse’s Noises Off Is Inherently Funny, But Uneven