The Bridges Of Madison County Gloriously Soars To The Heights 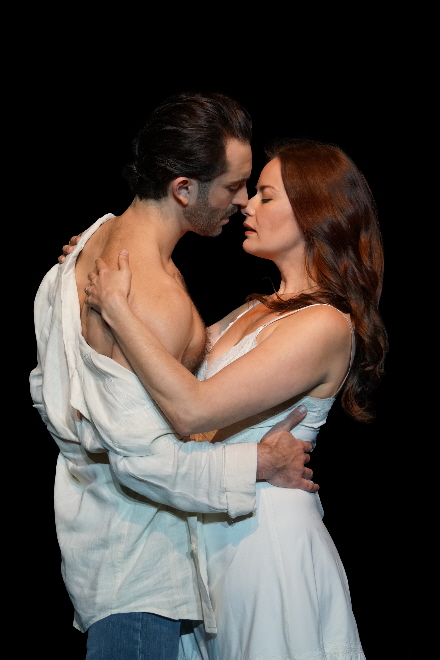 Critics get gunshy when we sit down to write knowing that we are going to employ superlatives, hoping that unstinting praise is not undermining our credibility. This is even more difficult in South Florida where the quality of work often is consistently strong show after show.

But Slow Burn Theatre Company’s production of The Bridges of Madison County is what we are saving up our credibility for – so that when a work of art is this effective, this moving, this captivating, then you’ll know we are urging you to see something truly special.

Very first thing: If you fear that this 2014 musical will be some treacly two-hanky retread of the 1992 novel or 1995 film, or, worse, an over-produced Harlequin bodice-ripping romance, you could not be more wrong.

Composer-lyricist Jason Robert Brown and bookwriter Marsha Norman have created an adult, mature tale of real middle-aged people unconscious of their sublimated yearnings for something more in their lives. They are wrestling with deep conflicting emotions after they are surprised by the sudden discovery of the liberating rapture of true love for the first time in their lives. It delves into how we deal with the possibility of realized dreams that would finally complete us — despite terrifying emotional risks and sacrificing everything we have built and doubtless hurting innocent people.

Exemplary is the transcendent pledges of love in the soaring “One Second and a Million Miles” in which the ultimate expression is not some imaginary lust-drenched explosion of volcanic passion, but the throbbing cresting of a churning sea of pure symbiosis.

Other than Kelli O’Hara’s luminescent Broadway performance as Francesca, the kind that comes once in a lifetime even to such a uniquely gifted actress, Slow Burn’s production is arguably better than the superb one we saw in New York in 2014. We don’t say that lightly. And that takes not a scintilla away from the respiration-stopping performance here of Anna Lise Jensen who delivers one of the finest musical theater efforts seen in Florida in years.

Indeed, this Bridges is a fully-realized flawless evening equal to Actors Playhouse’s Ragtime, Zoetic Stage’s Passion and almost as good as the Playhouse’s benchmark Floyd Collins in 2003. Following right on top of Slow Burn’s wonderful The Secret Garden, this may be the company’s best work in its eight-year history.

Set in 1965, it opens simply with Francesca on a mostly bare stage in a solo aria recounting her past as an Italian war bride who moved to her husband Bud’s farm in Winterset, Iowa, 18 years ago. As she describes her current life, townspeople appear, bringing on set pieces to create the community.

Bud is about to take their children to the Indiana State Fair, but an unsettled Francesca stays behind alone. Robert, a charismatic but emotionally-constrained photographer for National Geographic, arrives, seeking directions to a covered bridge that he must capture. She agrees to show him the location.

Something slowly, subtly flickers. She invites him to stay for dinner. Their attraction smolders. Both subliminally recognize the possibility to fill an empty place in their hearts that they barely acknowledged to themselves. The soulmates have a quietly intense affair for four days. Just before the family is due to return, Robert asks her to come with him. But exigencies require that she has to decide in a few hours.

The genius of the piece, at least on stage and in this production directed by Patrick Fitzwater, is that Bridges is not an apologia for adultery. It’s a recognition that we spend much of lives having made not so much the wrong choice, but a flawed one. The lovers realize that this is an unexpected chance to be who they are meant to be.

Brown (Parade, The Last Five Years, Songs for a New World) won Tony Awards for best score and best orchestrations for this work and the glory of his accomplishment is inescapable here. His numbers cross genres from a honky tonk bar anthem to a coffeehouse ballad to a sui generis pop-folk vein he alone owns. Much of his work interweaving piano, guitar and strings has a Joni Mitchell feel to it. Similarly, his lyrics are rhapsodic expressions of inner emotions often in seemingly simple verbiage. Much of the score consists of duets declaring love, but just as impressive are the inner monologues in which sublimated feelings and memories emerge from the shadows.

Norman (The Secret Garden, The Color Purple, ‘night Mother) creates a solid framework that makes significant changes from the structure of the source material. That may take a little adjusting to for devotees of the book or film, but they are mostly wise choices, such as depicting the close-knit nature of the community, part of what Francesca would have to give up; providing deeper looks into the characters of her family members, and generally juxtaposing the couple’s once-in-a-lifetime ardor with the reliable joys of ordinary life.

Other than the goat roper bar number, which has no purpose other than to start the second act with pizzazz, there are no missteps. In New York, I thought every individual in the cast got a solo number for no discernible reason than perhaps the actors’ contract, but in Slow Burn’s production it was clear that the numbers amplified what each lover would be leaving.

Jensen’s performance as Clara in the aforementioned Passion put this region on notice that the New York transplant was a talent to prize. But it did not prepare us for this stunning acting, singing and singing-acting. She may be no finer than in the non-musical scene when Francesca is writhing while weighing Robert’s ultimatum just as her returning family bursts in with prosaic stories and commonplace demands.

But Jensen’s exquisite golden soprano soars and caresses the score that Brown wrote for O’Hara’s operatically-trained voice. Unlike so many other actors, she doesn’t just stand and deliver her emotion-soaked arias like a stop-the-show power ballad; Jensen makes them organic musings that mirror someone alone with their thoughts, discovering themselves what they are thinking.

Nearly as excellent as Robert is Cooper Grodin, who played the lead in Zoetic’s Sunday in the Park With George. Wiry with a gaunt visage and piercing eyes, Grodin exudes a charisma essential to keep the tamped down Robert engaging. His voice is rich and powerful in full throes of passion. But his finest scene is in his detailed moment by moment interpretation of the a cappella lead up to “One Second and a Million Miles.”

The two leads exude enough chemistry, although not quite the heat that there was in the New York production. But both skillfully depict two souls tentatively, clumsily feeling in the dark for something they cannot believe is possible and terrified by if it becomes a reality.

The rest of the cast is uniformly excellent, again words chosen carefully. Heck, the ensemble includes Matthew Korinko and Ann Marie Olson, two of the best musical actors in the region.

Mark Sanders (Actors Playhouse’s Murder Ballad) plays Francesca’s plain-spoken husband with an honesty that eluded his Broadway predecessor. He’s a decent, hard-working man of the land who makes credible that a young woman from a war-torn land would find as an appealing source of stability.

Margot Moreland is a delightful neighbor, nosy but supportive, who nails the comic solo “Get Closer.” Michael Cartwright, playing her salt-of-the-earth husband, lends his sonorous baritone to the hymn-like elegy near the end. Kyle Kemph, last month’s Dickon in Secret Garden, makes a plausible teenaged son who wants to leave the farm behind. Julia Dale, grown up from her Playhouse turn in 2013 as the murderous child in Ruthless!, is a convincing daughter. Leah Sessa, Carbonell-nominated for her frantic bride-to-be in MNM’s Company this season, is a standout as the hero’s ex-wife musing how she could never quite reach him in her poignant solo “Another Life.” Others in the cast include Jeanine Gangloff (who leads the bar number), Aaron Atkinson, Rick Pena and Kimmi Johnson.

The creative team again is first-rate, especially the rich nimble sunset lighting by Thomas Shorrock and the best sound we’ve heard in the Amaturo auditorium from Rich Szczublewski.

The set is gorgeous with its golden wheat field background and fluidly slid-on set pieces, ostensibly by Michael McClain but which is nearly a photocopy of the Broadway set design. This occurred earlier this year in the set design for GableStage’s The Humans from a different designer. There are only a handful of experienced set designers working in a region with scores of professional companies and they are booked up solidly.

The unsung hero is musical director Eric Alsford and his on-stage band. Using the complete and original orchestrations by Brown, Alsford masterfully melds his instruments and singers through a quirky, eclectic score, making it seem like they have been working together for weeks when they only had a handful of rehearsals. Besides Alford on piano, the band included Julie Jacobs on percussion; Martha Spangler on bass; Guillermo Gonzales on guitar and mandolin; Sandy Poltarack on guitar; Liubov Ohrimenco and Raisa Ilyutovich on violins, Freddy Ortiz on violin and viola, and Elena Alamilla on cello.

The show only ran on Broadway for a few months, closing even before the Tony Awards. That was a crime that said more about New York’s tourist-heavy audiences than the material. We hope South Florida audiences will show far more discernment. They won’t be disappointed.

The Bridges of Madison County presented by Slow Burn Theatre Company through Feb. 4 at the Amaturo Theater, Broward Center For The Performing Arts, 201 SW 5th Ave., Fort Lauderdale. Performances are Thursday through Saturday at 7:30 p.m., Sunday at 2 p.m., and 1 p.m. only Wednesday, January 31. Running time about 2 hours 30 minutes including one intermission. Tickets are $47-$60. Call (954) 462-0222 for tickets, at www.browardcenter.org or #Ticketmaster.com; in person at Ticketmaster outlets or the Broward Center’s Auto Nation Box Office. Info at www.slowburntheatre.org 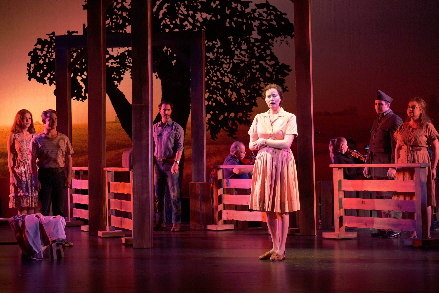