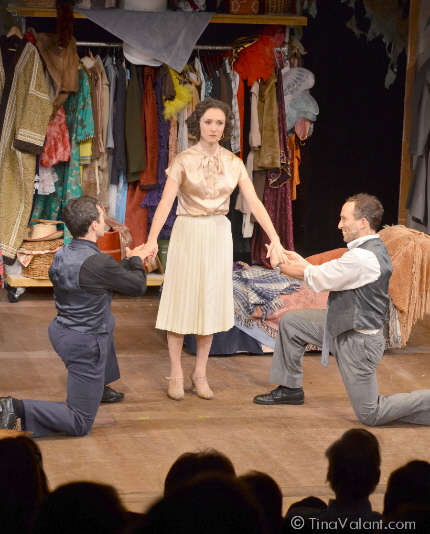 There are bits and pieces to love in what Plaza Theatre is billing as a tap comedy musical, Fingers and Toes.  This throwback draws its breath from musical theater naiveté and recalls a time when talent was about the love of tap dancing and the hard-knock life of the Great White Way when the competition wasn’t impersonating Glee kids or Who’s Got Talent? wannabes.

The setting is the rooftop of the Ziegfeld Theatre, circa 1939. Tristan “Fingers” St. Claire (Aaron Berk), a composer who has ditched his dreams of creating a musical while he’s nursing a broken heart from a failed marriage, would rather spend his time writing a maudlin sonata than working on a toe-tapper.

He’s sequestered himself in the rooftop loft that’s inhabited by old costumes, traveling trunks and his solace, a beat up baby grand. His happenstance wall art are retired canvas backdrops of painted Ziegfeld girl likenesses that are propped against exposed bricks. (Hats off to sets and props designer Alexander Woodward.)
He’s unkempt and unshaven; pessimism is Fingers’ middle name.

His best buddy is eternal optimist Dustin “Toes” MacGrath (Rick Faugno), a suspenders-wearing song and dance man. He wants to be a star, but is always relegated to the chorus. Both have the same dream – or at least they did before Fingers fell into a deep depression – to make it big on Broadway and find love, but not necessarily in that order.

Toes has a way for them to get back on their feet, however; he’s lined up a big-time producer to see the pair’s new show. Of course, in dramatic fashion, there are more than a few problems: First, the show doesn’t exist; secondly, they have only two weeks to get it up and running, and lastly, they need a co-star, a Ginger Rogers for Toes’ Fred Astaire. After a series of disastrous auditions, they find their girl — perpetually late singer-actress-dancer Molly Molloy (Nili Bassman) gets the job and, in due time, becomes the musical-within-a musical’s love interest.

Much of the script is clichéd and hackneyed and, more than once, the same device that gets a laugh in one scene is repeated to obtain the same result again and again. Mostly they are time-travel yuks about musicals that have yet to appear in the American songbook. “We could set a show in Oklahoma, says Toes to which Fingers replies: “That would be the worst musical ever…you might as well set is on a tropical island.” The audience gets the inside joke – South Pacific. There are other references as well —to Comden and Green’s Singing in the Rain, of which Fingers and Toes’ author/composer Logan Medland uses little cover to mask the overwhelming influence from that 1952 musical. The Act 2 song You Might as Well Laugh bears an unmistakable melody to Rain’s most popular tuner, Make ‘Em Laugh.

That’s about the best way to size up what ails Fingers and Toes. The musical suffers from a lack of identity. Is it a send-up of classic “let’s put on a show” musicals? Or is it a tribute?

Medland’s original score isn’t catchy enough and it probably would fare better if audiences could sing along with a musical revue of songs they knew instead of “soundalikes.” A silly ditty entitled Shit Sandwich, sung by Berk as Fingers, gets an A for originality, but feels awkwardly out of place in a musical that puts such emphasis on the era in which it exists.

A bigger problem still is this: There just aren’t enough Toes in Fingers and Toes. The stage and performers light up during some intricately choreographed tap numbers. And talented terpsichorean Faugno mesmerizes each time he glides across the stage. But things slow down to a lull when dialogue interrupts to spell out the boy-meets-girl, another boy meets the same girl, and boy-loses-girl story. We’re dragged into a sleepy lull, and the performers have a difficult time overcoming the script flaw to bring things back to up tempo.

Bassman as Molloy keeps up with Faugno in the dance department (almost – he’s just that good!), but they both seem to be struggling to bring life to the limp script. Berk hammers away at Fingers’ sad-sack story, but he can’t overtake the limited dimension the character is given.

Robert Moss’s direction uses the one-setting space well and he has an understanding of what’s needed to keep the tuner merrily rolling along, whereas in different hands it could easily become uneven (the divide between the book and the music creates this disparity).

David Wanstreet’s choreography is the life of the show and is the reason to see this musical. He’s created beautiful silhouettes, twists, turns and sensual nuances. An a capella tap number that finds Toes playing out his moods dramatically on a short staircase is magically designed by Wanstreet and orchestrated so masterfully by Faugno, it becomes a piece of tap art.

The musical’s claim to fame at this juncture is that it was accepted into the New York Music Theatre Festival (NYMF) in 2010 and has been performed in some regional theaters. The hope is that it can get an off Broadway run after playing Manalapan.

Audiences at the Plaza will find tidbits throughout to enjoy, but will they leave the theater humming a tune? Yes, but it will probably be a tried-and-true American musical standard than anything new from Fingers and Toes.

This entry was posted in Performances, Reviews and tagged Fingers And Toes, The Plaza Theatre. Bookmark the permalink.