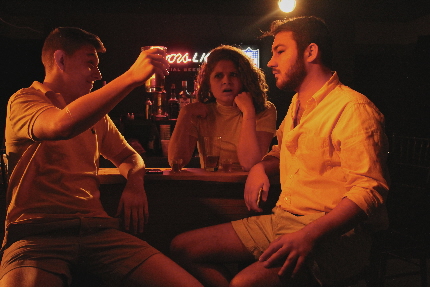 Because they write what they know, the five playwrights of Punchline Theatre Company’s #Unhappy Hour provide a peek into the evolving saga of Millennials in America in the 21st Century – South Florida Division.

Over the past decade as hyphenated actors-directors-playwrights, the close knit cadre of Mark Della Ventura, David Michael Sirois, Gabe Hammad, Meera Paul and Gladys Ramirez have delivered either a familiar mirror of your life or an eavesdropping Margaret Mead expedition for older generations, in works such as Brothers Beckett.

#Unhappy Hour is an unusual imaginative slice-of-life that is engaging despite that some facets work better than others. But it reveals a unique zeitgeist made up of familiar building blocks like the rocky road to romance, the wide spectrum of human behavior, and the presence of extra-terrestrials running our government.

The premise originally was for the authors to write seven separate playlets using the same characters in the same milieu, a South Florida sports bar that attracts regulars and strangers for its late night cut-rate “Unhappy Hour.” But during workshops sessions, directors Della Ventura and Hammad smoothly massaged together the scripts so that they didn’t feel like disconnected episodes. That resulted in the unified anthology feel of Grand Hotel or Hot L Baltimore or The Time of Your Life.

In it, true love and gallows humor are the only saving graces in a post-hope existentialist world in which the denizens try to live in low-key spite of damaged emotions and blunted dreams. It’s not a depressing place so much as one where people have accepted limitations and disappointments, and doggedly slog through life trying to scrounge what happiness they can — an emotional and spiritual Mad Max-o-sphere.

Charlie (Hammad) is the bartender whose determinedly blithe exterior so clearly harbors a decent heart. His longtime comrade in arms (and secret crush) is waitress Claire (Montesino). They indulge in whipsmart, rapid fire banter honed over the years, as well as routines such as drinking straight from bottles during slow periods and daydreaming together of joint trips to exotic locales. Charlie has a none-too-bright girlfriend of sorts Holly (Pigna/Lamendola) and Claire is frequently on the phone with her abusive boyfriend Bobby (Baierlein).

A strange procession of what Charlie and Claire call “F–kin’ Floridians” drift in. “I love Unhappy Hour. That’s when the real Florida freaks come out,” Charlie says.

They include a squabbling couple, a Jewish man (Baierlein) and a Latina (Caputo); a man (Iovelli) plotting with lifelong buddy (Caputo) to steal a congressman’s seed from a sperm bank so she can have his child and sue him for a generous settlement; two nasty misogynistic preppies (Baierlein and Iovelli) debating whether they should use the C word to describe a girlfriend; a terrified government worker (Huntsinger) expecting to be assassinated or kidnapped by the alien he works for, and a mysterious visitor (Ellwood).

It’s an affectionate alcohol-fueled droll stroll through the only-in-Florida world of crazies. It features snappy repartee drenched in blue language such as Claire seeking a drink: “I just want something cheap inside me – that isn’t one of you.” It also is deeply rooted in the pop culture that spawned these young adults at the end of their protracted adolescence of their 20s and entering the inescapable responsibilities of their 30s. To wit, Charlie mocks Holly for dating someone who fronts a Nickleback cover band. (For older folks, Nickleback was a popular Canadian band circa 1995-2008 derided for being formulaic and later voted “the number one musical turnoff.” Thank you, Wikipedia.)

The one section that doesn’t work is Hammad’s mean-spirited “A Bad Night For Brad Knight” section. A nebbish (Huntsinger) is unrelentingly bullied and demeaned by the preppie jerks and Brad’s high school flame (Caputo). We kept waiting for the mounting abuse to turn into some surprise development, but it never did. Perhaps it was meant to be darkly funny like some cross between Ionesco and Sartre, but the merciless cruelty was unrelievedly sour.

Most of the actors do a workmanlike job, but Hammad and Montesino nail Sirois’ creation of old friends who know each other’s verbal and emotional shtick so well that they barely allow the other to finish their sentences.

The two directors keep the evening moving at an appropriately laid-back loping pace and create the loopy atmosphere the writers sought. None of the intentionally varied pieces feel out of place in this environment, but not everything lands equally well.

Punchline is a mom-and-pop operation (literally: founders Hammad and Paul just had their first child) that opened for business last season with A Game of Scones, and followed it this fall with The Rocking Dead, and A Very Kosher Christmas, all wry offbeat comedies with as distinctly 21st Century vibe. The company is based in the Black Box Studio Theatre on the second floor of the Coral Springs Center for the Arts. Next month, it will open I Love You Because, a modern musical twist on Pride and Prejudice, and then Fifty Shades of Hillary, a work still being written by Hammad.