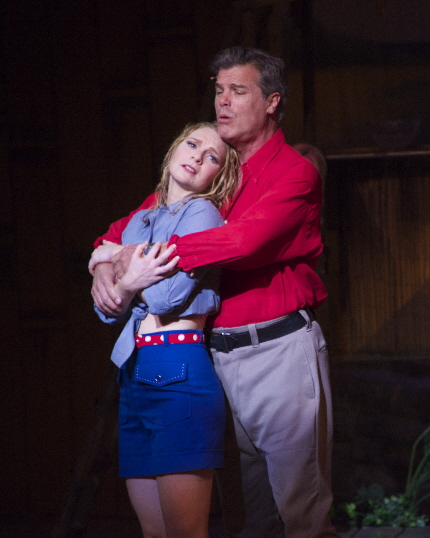 For a solid day, I have wrestled with how to dig several intellectual, critical or analytical layers out of the experience that was the revival of South Pacific at The Wick Theatre.

In the end, it keeps coming back to something so obvious and simple: It’s the music, the glorious Rodgers and Hammerstein score and lyrics delivered by a talented and skilled corps of actors who plunge us into unadulterated but adult romance.

Hammerstein’s script, which reaches an excellence that few produce anymore, remains remarkable for its simultaneous simplicity and subtlety. But director Norb Joerber’s cast is only adequate in making believable the dramatic facet of cockeyed optimism battling ingrained prejudice in the name of true love.

Some of the quick emotional turns common to musical theater seem implausible, such as why Liat and Cable fall deeply in love at first sight, and, for that matter, why Arkansas hick Nellie Forbush and French expatriate planter Emile are attracted to each other. It was precisely this kind of directorial sorcery that made Bartlett Sher’s Lincoln Center revival such a triumph along with its superb musical performances.

But the glory of this production is that Joerder and musical director Michael Ursua hired and then shaped the work of musical theater performers who nail the classic score with an infectious sense of delight and a powerful emotional commitment.

When tall handsome Nat Chandler unleashes his sonorous baritone on Emile’s “This Nearly Was Mine,” he delivers the experienced man who knows the profound value of love and the agony at its likely loss.

When the effervescent Adrianne Hick’s Nellie hears him sing “Some Enchanted Evening,” her face beams with disbelief that something this wonderful could be happening to her. And when Hick lets loose her unabashedly ecstatic declaration “I’m in love with a wonderful guy,” the audience is a goner.

Again, something doesn’t quite land as solidly with some of the book scenes, especially the comedy stretches or the ones involving the Seabee’s brass. But you don’t have to wait long to hear Amy Jo Phillips’ pragmatic entrepreneur Bloody Mary sing a surprisingly seductive “Bali Ha’i” or the initially stolid Marc Koeck’s Lt. Cable finally come alive crooning the ineffable “Younger Than Springtime.”

The Wick has once again used digital tracks by MT Pit LLC, but they provide the required lush background for audiences who know every note from cast recordings. Much of the scenery comes from the Utah Festival Opera & Musical Theatre, but it is augmented by a considerable use of animated scene-setting projections by Josieu Jean..