Report From New York: A Heroic And Flawed Lyndon Johnson Wields Power In “All The Way” 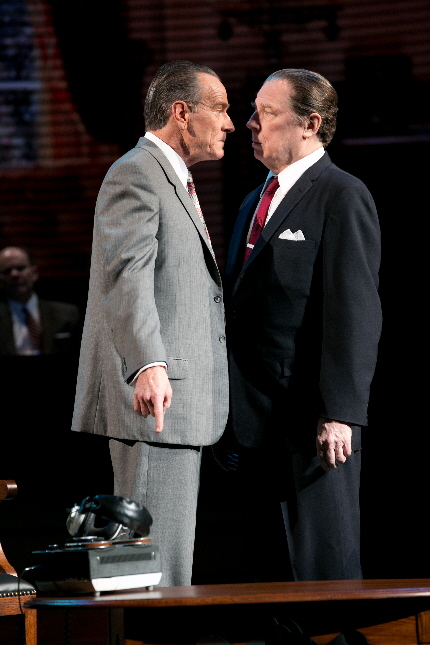 Bryan Cranston as LBJ stares down Michael McKean as J. Edgar Hoover in All The Way / Photo by Evgenia Eliseeva

We’re back from our semi-annual trip to New York to scout out productions you might want to see (or not), shows that might tour South Florida and scripts that might be worth reviving in our regional theaters. We will publish them over the next few weeks before the Tony Awards, interspersed among our local reviews and features. Three other shows that produced Tony nominations (The Glass Menagerie, A Night With Janis Joplin and A Gentleman’s Guide To Love and Murder which is still running) were reviewed by us in passing a few weeks ago in an article at http://tinyurl.com/omrov6m

See the list of previously reviewed shows at the bottom of the story, including The Bridges of Madison County. Other reviews are coming of Mothers and Sons, Violet, Heathers the Musical and Satchmo at the Waldorf.

Far from an academic history lesson, All The Way is awash in blood on the floor of the slaughterhouse where your sausage is being made, specifically watching master manipulator Lyndon Baines Johnson eviscerate enemies and compromise with potential allies for causes altruistic or self-aggrandizing.

Robert Schenkkan’s Tony-nominated play at the Neil Simon Theater is blessed with a fascinating portrait by Tony-nominated Bryan Cranston, but it’s his script’s premise that makes the evening stay with the audience days later. Far more than a political biography, All The Way contemplates that the need for pragmatic sacrifices, even for the most noble of goals, can corrupt the soul.

We watch Johnson try to create a legacy by ramrodding his version of John F. Kennedy’s Civil Rights Act through a recalcitrant Congress. Then Johnson, who only achieved the Presidency he had long sought because of Kennedy’s assassination, turns his skill to winning an elected term in the office.

Almost every source assures that the stiff, phlegmatic Johnson we saw on television was only one non-representative sliver of a multi-faceted political animal notable for his canniness and effectiveness in ruthless negotiations with friends and foes.

The most insightful aspect of the play results from the dichotomy of the two acts. In the first, we come to admire and cheer LBJ’s bull-headed determination to use any means, any means at all, to achieve the admirable goal of creating a civil rights act in what appears to be a very tiny window of opportunity.

But in the second act, when he applies precisely the same remorseless ruthless tactics to achieve his first elected term, we are horrified by his willingness to use any means, any means at all, to sacrifice anybody and anything resembling integrity to consolidate his personal political power.

For all of his seeming altruism, it nearly makes you wonder whether his zeal for civil rights wasn’t at least in part an attempt to emphasize the scope of his power. He almost seems held hostage to his whims, which seem less Machiavellian brilliant so much as a voracious force of nature beyond his control. But he assures a colleague, “Nothing comes free, not even good.”

We admire him as he tells folksy stories that seem to be off-topic until he brings the moral back directly on point (Spielberg had Lincoln do the same thing in his film). We are appalled as he takes out his frustration on his wife and how he cuts off one of his closest aides when political expediency demands it.

Schenkkan (best known for the Pulitzer-winning epic play The Kentucky Cycle) debuted the work at the Oregon Shakespeare Festival in 2012, directed there and here by OSF’s leader Bill Rauch, with OSF veteran Dick Willis winning acclaim as LBJ. But Willis’ name wouldn’t sell ten tickets on Broadway, even though he will likely star in Schenkkan’s upcoming sequel reflecting the Vietnam War years.

That brings us to the Broadway debut of Cranston, a veteran don’t-I-know-that-face actor until exploding in TV’s Breaking Bad. But don’t waste a moment looking for Walter White.

Cranston and Rauch have created a Texas-sized King Lear who is marvelous to watch as Cranston/LBJ runs through a dictionary’s worth of verbs: cajoling, wheedling, threatening, raging, dealing, compromising, acceding, defying, whining, cringing, erupting, flattering, manipulating and using people’s hopes and weaknesses like stops on a church organ. It is a bravura performance than needs to be seen and is the front-runner for the best actor Tony.

That said, for those of us old enough to remember LBJ on television, Cranston doesn’t especially conjure LBJ himself. He has the squint and the slack-jawed mouth down, but he doesn’t sound much like LBJ who never lost his Hill Country syrupy drawl. And while we are told that the off-camera LBJ was far different than his televised one, Cranston is far more animated, kinetic, even manic than any LBJ we saw or heard.

I read the original script when it was submitted to the American Theatre Critics Association/Steinberg new play competition and we gave it our top award that year. Interestingly, the work read better on paper than it played in New York. This production moves very fast – even clocking in at three hours with intermissions – and everyone involved has varied success feathering in the essential exposition. It seems a long three hours.

The work is unlikely to be produced by a South Florida regional theater for several reasons, starting with economics. Two dozen actors play at least twice that number of characters who are barely — and not always — kept straight for the audience by their names being projected on a screen. A few recognizable actors play only one or two roles, Michael McKean as a self-satisfied J. Edgar Hoover, the venerable John McMartin as Johnson’s friend but opponent Sen. Robert Russell of Georgia and Eric Lenox Abrams as Martin Luther King whose echoes Johnson‘s maneuverings in trying to reconcile warring facets iof his base to support the proposed bill.

The set is simple enough: A carpeted arena surrounded by banks of seating like the old Roman Senate except its wood-paneled rather than marbled. The cinematically fluid scene changes are achieved primarily with Jane Cox’s agile lighting.

Many audience members will leave All The Way almost wistful for the kind of bare-knuckled leadership that may run roughshod over the niceties of Democracy, but actually breaks through self-interested partisanship to come out the other side having accomplished something. But it should also make you weigh the cost.

To see many photos and videos, visit: http://allthewaybroadway.com/

To see clip of all the nominated shows produced for the Tony Awards, click here.

This entry was posted in Performances, Reviews and tagged All The Way, Bryan Cranston, Robert Schenkkan. Bookmark the permalink.