Report From New York: I’ve Never Been To Spain, But I’ve Been to Madrid With Edie Falco 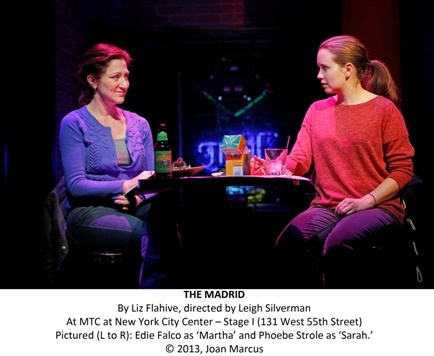 I expended so much effort at Liz Flahive’s The Madrid at the Manhattan Theatre Club desperately trying to get my metaphorical arms around the shape and meaning of this play about a runaway wife that I failed to take many notes. I also failed to see why this passable script was mounted other than Flahive is a producer on TV’s Nurse Jackie, which stars The Madrid’s headliner, Edie Falco.

It’s not a miserable script nor a miserable evening in theater, just a badly flawed one that leaves way too many questions and issues flapping around unresolved, presumably unintentionally.

There’s an intriguing if not original premise to mull, some adequate if not engaging performances, and some genuinely funny gallows humor. But a better play was struggling to get out under Leigh Silverman’s direction. This needed to go through workshops with a tough-minded dramaturg before bowing on Broadway. It’s a script that South Florida regional theaters should pass on until Flahive takes it back into the shop.

The play opens with Martha (Falco), a Chicago kindergarten teacher exuding a weary cheeriness, who abandons her class to one of her little charges and heads to parts unknown. Then for a considerable stretch, we see the profound confusion and pain this causes her gentle husband (John Ellison Conlee), her befuddled mother (Frances Sternhagen), neighbors (Heidi Schreck and Darren Goldstein), but above all her daughter, Sarah (Phoebe Strole), a newly-minted college grad.

Sarah delays her entry into the real world as a teacher to care for her father and grandmother as a substitute for her mother. She works at a Starbucks while she and the family wrestle vainly with Martha’s inexplicable disappearance, which benefited from no warning signs or even a cause, as far as Sarah can see.

And then suddenly, Martha reconnects, but only with Sarah. She’s living in a nearby fleabag hotel called The Madrid and volunteering as a booking agent for a bar’s open mike night. She is so shut down and so uncommunicative that nothing is or will be clear. It seems to be almost a surprise to her that her disappearance has caused angst as if that fallout hadn’t occurred to her. Her entire affect is a non sequitur.

It’s difficult to explain the arc of the plot from there because not only is it not clear, but the eventual denouement is even more muddled.

So much is wrong with this script. With Falco in the lead, you’d assume the play is about the wife – why she leaves. But not only is it as much about the fallout on the daughter and the family, it’s mostly about that.

Flahive doggedly refuses to give us much insight into the genesis of the wife’s desertion other than that she has secretly wanted to do it before. At one point, the daughter says (for all of us) there must be more to this. But Falco and Flahive stubbornly give us a blank wall.

Every character really has only two notes to play and one level. The husband seems to be in wandering about in a fog of mourning but that’s really the only quality Flahive gives him to work with. He spends the entire play acting stunned that she left. Then we find that she had tried before and he knows it. And in the last scene, he hints at a new-found acceptance of the situation based on absolutely nothing happening and no epiphany gracing his consciousness.

The last scene has Martha returning home, ostensibly to persuade her daughter not to stick around in a dead end life. Whether she is there to stay or she’ll leave tomorrow or whether she’ll dance around naked is completely unfathomable, and it doubtful that’s what Flahive meant.

Falco comes off reasonably well under the circumstances. She seems to specialize in severely tamped down, downtrodden women. Martha has that off-beat disconnected vibe that Falco employed two seasons ago as the clinically depressed housewife in John Guare’s The House of Blue Leaves. But it’s impossible to build an entire play around such a person.

Strole, whose winsome appearance made her standout in the ensemble of Spring Awakening, has to carry the bulk of the evening. She has far more stage time than Falco. She made for a credible 22-year-old trying to cope with the tragedy, putting her future on hold – precisely what her mother would not want. But she’s not riveting enough to be the natural fulcrum of the entire play when you have a star like Falco and everyone’s looking to her to be the focus.

The venerable Sternhagen is criminally underused except to play a dotty grandmother who drives her car into trees in the illogical hope that it will bring her daughter back home. Go figure,

I’m not into giving letter grades often, but StageGrade.com, a terrific site for tourists that aggregates reviews for New York shows, gave it a C- and that’s pretty dead on,