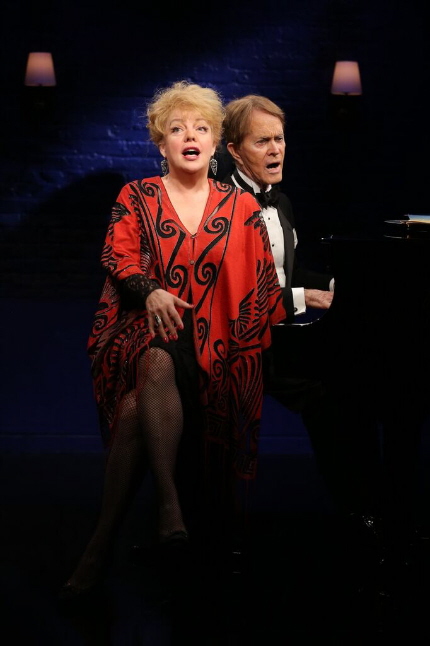 The lovely, witty and sometimes caustic songs of Noël Coward are receiving an energetic and heartfelt revival in the highly entertaining Love, Noël: The Songs and Letters of Noël Coward, currently at the Irish Repertory Theatre in New York City.

The limited-run cabaret tribute doubles as a look at the life of this prolific British composer, playwright, director, actor and singer through the invigorating performances of soprano KT Sullivan and singer/pianist Steve Ross.

Once heard, Coward’s songs more than hold up to 21st Century sensibilities while also giving an entertaining history lesson of his song catalog. But it is also striking how few of these songs are part of the modern oeuvre.“ Love, Noël: The Songs and Letters of Noël Coward makes us remember that, thanks the enjoyable performances of Sullivan and Ross. (Fortunately, many of his plays Hay Fever, Private Lives, Present Laughter and Blithe Spirit are regularly done.)

Sullivan, lovely in a black lace cocktail dress and a red fringed duster, is the ideal foil to Ross who doubles as the debonair Coward to bring life to these songs. Between songs during the seamless, intermissionless 80-minute tribute, the pair give a condensed biography of Coward by reading excerpts from his massive correspondence with, among others, George Bernard Shaw; his mother Violet; Greta Garbo; Lynn Fontanne; Virginia Woolf; Edna Ferber, and the Queen Mother. We also see the extent of Coward’s deeply felt relationships with three other important women in his life — Gertrude Lawrence, Marlene Dietrich and Elaine Stritch.

These letters depict a cultured, a bit snooty, but also compassionate, generous man whose loyalty and bigger-than-life personality were evident.
The readings of these letters give Sullivan a chance to shine as she portrays four of them. Violet was her son’s biggest fan — immensely proud of Coward’s achievements while also basking in the glory and support his fame brought her. Sullivan personifies Lawrence’s letters and sometimes uneasy relationship with Coward and deliciously milks all of the drama that Dietrich, who must have been a handful, apparently loved to wallow. Sullivan’s spot-on impersonation of Stritch cumulates in the hilarious “Why Do the Wrong People Travel?” getting in the faces of several audience members as one can imagine Stritch doing. Affectionately, of course.

The production would have given a more complete look at Coward if it had included more than one brief letter from one of his lovers. However, due to the times in which he lived, Coward was forced to be extremely private about his personal life. His homosexuality was never discussed publicly but was one of those open secrets.

Floridians may remember that Love, Noël: The Songs and Letters of Noël Coward had a limited run this past February at the Kravis. But the New York production, written and devised by Coward historian Barry Day and directed by Charlotte Moore, is better suited for the Irish Rep’s intimate W. Scott McLucas Studio Theatre, which seats 55. The small in-the-round stage contains only Ross’ piano, a chair that Sullivan occasionally uses and a side seat. As a result, each member of the audience feels as if they are part of a private party hosted by Sullivan and Ross. Upstage, a bust of Coward observes the production, which is more akin to chamber musical.

Perhaps the definitive look at Coward occurs when Ross recounts an interview when he was asked to sum up his life in one word. For Coward, one word, of course, would never be enough. His answer was “Love…to know that you are among people you love and who love you.” Love, Noël: The Songs and Letters of Noël Coward proves he still is.

This entry was posted in Reviews and tagged KT Sullivan, Love Noël: The Songs and Letters of Noël Coward. Bookmark the permalink.