Report From New York: Satchmo At The Waldorf Hits A High Note Without Playing A Bar Of Music 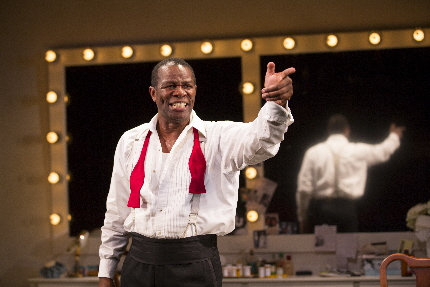 John Douglas Thompson as Louis Armstrong in Satchmo at the Waldorf / Photo by T. Charles Erickson

See the list of previously reviewed shows at the bottom of the story, including The Bridges of Madison County, Mothers and Sons, Violet and All The Way. The last review coming is Heathers the Musical.

The ghosts (or at least the spirits) of musical greats have been haunting theaters on and off-Broadway theaters successfully over the past decade, notably Frankie Valli and the Four Seasons in Jersey Boys, A Night With Janis Joplin, Judy Garland’s End of the Rainbow, and just in the past few months Beautiful, the Carole King Musical and the revival of Lady Day at Emerson’s Bar and Grill. But all of those, even with perfunctory plots, are at heart just dramatically well-constructed excuses to hear beloved music.

In contrast, Satchmo at the Waldorf triumphs with very little music and none of it created live by the brilliant John Douglas Thompson’s resurrection of the jazz great. Instead, Thompson summons up Louis Armstrong reminiscing near the end of his life after a performance at the titular hotel in 1971. The evening is an incisive character study not a greatest hits concert.

The script by Wall Street Journal theater critic Terry Teachout and the direction by Gordon Edelstein credibly make it seem as if the audience is simply a post-show visitor to Armstrong backstage. Unlike most one-man bio-plays that unload exposition with subtlety of a dump truck, these three men create the illusion that Armstrong the incorrigible storyteller is just relating anecdotes.

Yet those tales not only cover much of his life, but serve as a first-person testimony to this country’s slow begrudging emergence from overt, wide-spread, virulent racism into the early stages of an uneasy and imperfect racial equality.

Sadly, this production ends next week at the Westside Theatre off-Broadway. But that may not be the end of the line. It had previously sold out houses with Thompson in Pennsylvania, Connecticut and Massachusetts, which should encourage a producer to take it on the road. Additionally, it provides a bravura role for older black actors who want another role to chew on besides Hoke in Driving Miss Daisy. We could suggest a few Florida gentlemen for the job of a regional here takes it on.

Those actors would do well to study the work of Thompson, a Shakespearean actor well-known in Chicago. He is nothing short of miraculous from the moment his Louis Armstrong trudges into the dressing room exhausted and bent over, literally stumbling across the room toward an oxygen tank and breathing mask.

Then that grin explodes from his face, his eyes gleam and that gravel road baritone greets his visitors. And we’re off on a journey as he casts his mind back to his early days in Storyville and walks us through tours of the segregated South and up through a widespread popularity that once had him edge the Beatles out of the top spot on the pop charts.

Armstrong may be unable to ignore his growing frailty including exasperation in his first line to the audience about his incontinence. But he sidesteps self-pity with cracks like, “Man, how’d I get to be this old?” Instead, this Armstrong is constantly walking around the room, shedding his tux for comfortable clothes, chugging Pepto-Bismol, dictating notes into a reel-to-reel tape recorder for a planned book and allowing a few numbers playing from that same machine to set off another story.

With authentically profanity-laced vocabulary, he works his way through high and low points in his life, simultaneously communicating a sense of pride in what he has achieved and sadness at the indignities from bigots who made him eat in the kitchen. He can’t shake resentment that some young Turks like Dizzy Gillespie and Miles Davis appreciate his musicianship but publicly chide his crowd-pleasing attitude as being an Uncle Tom.

Just when you think you have taken the measure of Thompson’s incarnation, Armstrong takes on the persona of his close friend and manager, Joe Glaser, a fast-talking white man from Chicago who helped Armstrong build a career and then betrayed him in his will. Thompson inhabits this other human being from the voice to his posture to a degree that is like having a whip cracked over your head.

In the end, Thompson/Teachout’s Armstrong stands proudly to declare that “It’s my life and, man, I used to live it!… All I want to do is play my music…. . I never played a wrong note.”

This entry was posted in Performances, Reviews and tagged Gordon Edelstein, John Douglas Thompson, Satchmo at the Waldorf, Terry Teachout. Bookmark the permalink.