Posted on December 1, 2017 by Bill Hirschman 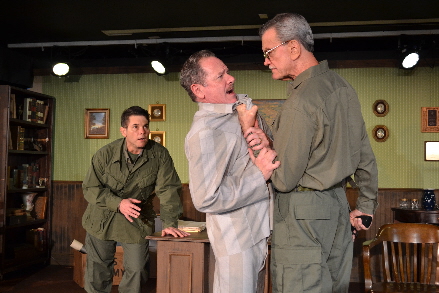 It’s the eyes. Some darting nervously. Some gazing back through time rather than through space. Some nearly leaden. All of them haunted.

Eyes betray that the characters in The Camp are living in the present but are harboring images – some recent, some decades old – that have molded who they are.

This world premiere by the West Boca Theatre Company about an Army company discovering a concentration camp does not advance the age-old discussion how “good” people can be passively complicit in such horrors.

But Michael McKeever’s insightful script and a solid cast under Michael Leeds’ direction expertly provide a three-dimensional illustration that forces the audience to query their own souls about their responsibility to oppose evil.

While humanity obviously wins the intellectual and ethical argument, McKeever ensures the audience weighs whether civilians should have opposed the Nazis and thereby endanger the lives of those who depended on them. Lurking underneath is whether we are slaves to human weaknesses arising out of selfishness, fear or anger.

Genocide is hardly limited to Germany in the 1940s and some observers might suggest that Americans may face, perhaps are facing the emergence of similar issues of whether to act upon our obligation to our fellow man. Myanmar?  Tibet? African-Americans?

The play opens as the Allies are closing in on Berlin. A weary vet, Captain Payne (Bill Schwartz), wants in on the action but his unit is sent to a procession of docile provincial towns to seal their occupancy.

He and his aide, Lt. David Silverman (Todd Bruno), are in a Bavarian burg whose name translates into Happy Town, ostensibly for a couple of days. Payne is a mélange of authoritarianism and collegiality, cold-eyed practicality and guarded empathy, bored but efficient. Armored with a bitter sardonic wit, his decades as a soldier has made him doubt the triumph of human decency. As a result, he has no patience for hypocrisy, dissembling or self-delusion.

He brusquely conducts a perfunctory meeting with the town mayor Kessel (McKeever) who has the nervous anxious-to-please mien of someone always afraid he is about to be hit. When Kessel says he has come to formally surrender the town, Payne slaps him back with the fact this village automatically reached surrender status with the arrival of his troops.

Silverman, an American-German Jew, privately advises that these are blameless civilians, not the enemy. But then a soldier Alan Carter (Daniel Llaca) enters with news of the stomach-retching discovery of a concentration camp five miles west of town.

Payne and Silverman are stunned after a trip to the site and investigate Kessel’s claims that no one had any idea of its existence – an impossibility after they interview a survivor Evelyn Schumann (Jeni Hacker).

The questions mount how anyone could have been blind to the horror, how they could be ignore their obligation to resist it – a question that has dogged humanity for more than 70 years. The answers are obvious although some rationalizations have some weight no matter how disingenuous, like the mayor’s claim to be protecting his neighbors from reprisals.

These examinations culminate when a character is on the verge of lashing out in violence and must choose whether he is any better than the people he despises. To paraphrase the script: The real battle is not with “the enemy;” the real enemy is within you to remain yourself and who you believe you should be.

All this and more is reflected in those eyes of the actors under Leeds’ leadership. Schwartz’s Payne seeing into the mist of his past to recall the horrors he saw during The Great War; Kessel’s eyes careening about seeming looking for escape, awash in fear and later in humiliation.

The Payne created by Schwartz, Leeds and McKeever is a complex person who has been worn down by decades of warfare yet who is still capable of a frigid merciless fury when confronted with one more atrocity.

McKeever can be hilarious as he was in his Clark Gable Slept Here or heartbreaking as he was in The Timekeepers. Here he creates a man who has learned how to adjust and accommodate with anyone or anything to protect himself, his family and the townspeople he leads. McKeever inhabits a harrowing scene in which Kessel is in physical and emotional agony over a reaction to a unique punishment that Payne invents. Yet, he makes credible that Kessel’s rationalizations enable him never to acknowledge the betrayal of his humanity.

Hacker, one of the best musical theater actresses in the region, reminds everyone that she has equally admirable straight dramatic chops as well in her portrayal of someone whose deadened eyes, stoic expression and monotone voice depict an emotionally cauterized soul who has learned to not express feelings for fear of execution.

As strong as the production is, there is always a distancing sense of actors performing a play on stage except in the aforementioned scene of Kessel’s reaction to being punished. As a play located solely in the mayor’s commandeered office, the horrors of the camp and the reprisals in the community ordered by Payne occur off-stage and have to be recreated in second-hand reports and discussions. Veteran playwright McKeever’s evocative writing produces sufficient stimuli for the audience to picture those scenes in their imagination. But it almost calls out for the visuals of a film version or television version.

As usual, Leeds proves a deft director who welcomes little touches like Payne hanging his helmet on a decorative vase. He trusts this talky play, such as freezing characters where they stand and sit for Schumann’s long interrogation about the realities of the camp. But he also knows when to let the play breathe in silence such as the tableau of Kessel undergoing Payne’s excoriating punishment.

West Boca Theatre Company, which previously melded professional and community theater resources at the Levis JCC Sandler Center, has decided to rely solely on professionals including some Equity actors and a creative team of pros such as set designer Jodi DellaVentura. Upcoming shows include the Stephen Sondheim musical Company and the Christopher Durang farce Vanya and Sonya and Masha and Spike.

(Note: McKeever serves with this critic on BCON-TV’s Spotlight on the Arts program.)