Posted on November 1, 2016 by Bill Hirschman 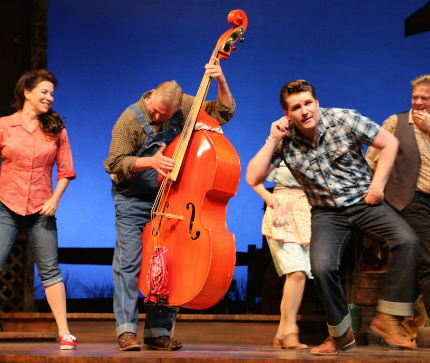 In Riverside Theatre’s polished production of the musical revue Ring of Fire, four pitch perfect voices and a host of skilled musicians bring to life the legacy of America’s greatest home-grown troubadour, Johnny Cash. And what a gathering of talent.

While the show, created by Richard Maltby, Jr, begins with a plodding exposition delivered with oh-so serious intent, it wakes up when the music starts.

Jason Edwards and Benjamin D. Hale have that dark molasses deepness that resonate and thrill. Trenna Barnes and Allison Briner-Dardenne sing with exquisite precision, letting their voices rise and fall in syrupy comfort.

And what credits these four excellent performers have. Edwards, who directs this show, appeared on Broadway in Ring of Fire and is featured on the original cast album. He is nothing less than superb. Hale performed the role of Johnny Cash in the Las Vegas production of Million Dollar Quartet. Barnes has performed in 10 other professional productions of Ring of Fire and performed with big names like Reba McEntire and Trace Adkins. And Briner-Dardenne just finished performing in the Broadway production of Steve Martin and Edie Brickel’s highly touted Bright Star.

But funny enough, the moment where the show first pops to a wide-awake life is when the upright bass player, John Marshall, comes out of the shadows and takes center stage, plunking strings and gyrating with such enthusiasm and energy that you know this man loves doing this. Not overly directed, Marshall comes across as real and natural, putting the first smile on your face. Another pop of excitement comes with the appearance of percussionist, Walter Hartman, who is from Johnson City, Tenn. and shows it with his blue grass talent playing buckets and jars. And to that music director Jeff Lisenby, who plays accordion here and did the same on the Broadway production.

Since this is a musical revue, there’s no story, character development, conflict…all those things that typically keep a theater audience riveted. So there has to be great music stirred to life with zeal. Here, the production is so slick that moments slip into being forced. Think of musical numbers in a 1960’s television variety show where everyone pretends to be best friends and you get the idea.

Nevertheless, the audience laps up every moment and can hardly wait to jump to their feet to show their admiration.
They love “Ring of Fire,” “Folsom Prison Blues,” “A Boy Named Sue,” “I’ve Been Everywhere” and “I Walk the Line,” which really are sung so very well. There are also many, many more songs that are probably more recognizable to Johnny Cash fans than they are to the general public.

However, Riverside’s production has left out the song “Hurt,” written by Michael Trent Reznor of Three Inch Nails and featured as the second song in the Broadway production. That’s really too bad, because “Hurt” is one of Cash’s most evocative, deeply soulful songs of his later career and one that earned him a whole new generation of fans.

This entry was posted in Performances, Reviews and tagged Johnny Cash, Ring of Fire, Riverside Theatre. Bookmark the permalink.