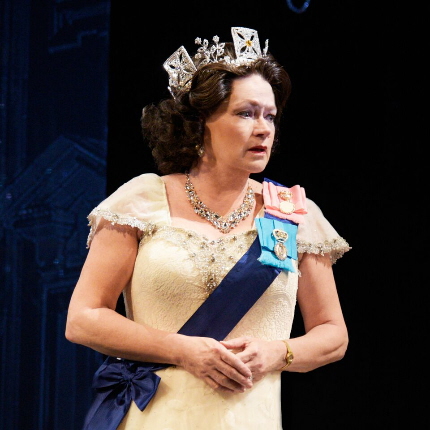 From Winston Churchill onward, Queen Elizabeth II has been meeting her prime ministers every Tuesday evening for conversations about the state of her democratically governed kingdom. Oh, to have been flies on the walls during these communiqués between citizen and sovereign, president and figurehead: Did she share laughs, dispense advice? Did she ever question their policies, or their character? Or did she always support their positions, no matter how controversial, without equivocation?

Alas, there surely have been no insects on the rarefied walls of Buckingham Palace; guards would have swiftly swatted them before they could reach the intimate sanctum of the Queen’s private Audience Room with its fireplace, Old Master paintings and 1896-vintage Herve chairs. Nothing of these rendezvous have been recorded for posterity, but it hasn’t stopped playwright Peter Morgan from imagining their content.

The Audience, the 2013 West End sensation turned Tony winner on Broadway, conjures 10 such meetings, from Winston Churchill through David Cameron, though not in chronological order. The effect, in the play’s regional premiere at Maltz Jupiter Theatre, is that of watching an interstitially linked short-play collection. And like every shorts compilation, some of the pieces delight while others plod.

Director Lou Jacobs’ production is never less than stately—gilt and decorum ooze from the 12 resplendent chandeliers dangling over the stage—but there’s an imbedded stolidity that can feel suffocating. Aside from a sparkling Act Two respite at Balmoral Castle, the show consists mostly of two people sitting in chairs, in the same interior, re-hashing 60 years of British history. Morgan knows from sedentary dramas, having penned Frost/Nixon, and The Audience could have used some of that play’s combative crackle.

Yet at its best, Morgan’s faux transcripts have a witty, perceptive air carried by the eloquence of hindsight: We don’t believe for a second that we’re witnessing actual conversations, but they contain the warmth, wisdom and ironies that can only accrue after decades of historical perspective.

We begin during the scandalous ‘90s tenure of John Major, deftly embodied by Mark H. Dold as a weary milquetoast stripped of his influence—“When I walk into a room, heads fail to turn”—and resorting to familiar blame-the-media saws and the bitter observation that, eventually, all once-beloved leaders are eventually hated by their electorate. As the Queen, Karen Macdonald counters with sage words, a level head and a sprightly sense of humor about her prime minister’s follies. “Why don’t you resign?” she chirps, earning a well-deserved laugh for the flippancy of her tone. Major would go on to do just that.

This is essentially the formula of The Audience: Elizabeth II is (with a notable exception) the unflappable rock of the United Kingdom, offering an invisible hand to the power brokers and maintaining continuity and order even as the tides of history wash over and around her. The role provides, for Macdonald, easily the show’s most dynamic performance, given that she’s rarely offstage.

With Churchill—Colin McPhillamy, full of windbag gravitas—Macdonald is youthful and naïve, almost letting the towering Great Man of history outsmart her. In her second convention with Major, she is snippy and defensive, visibly pained by the tabloids’ obsession witPh the fatalistic Princess Diana.

With Anthony Eden (Peter W. Galman, in a small but commanding performance), she is a bold investigator, ferreting a confession from her crooked P.M. about British collusion in the Suez Crisis. And with the soon-to-be-replaced Gordon Brown (Paul de Boy), chastened by his “shunning” by the Obamas on a recent trip to Washington, she is frail of step but ever-present mentally and vocally, comforting the insecure leader with grandmotherly sensitivity.

Each scene becomes another jewel in the Queen’s crown of personality, richly conveyed by Macdonald with subtle transparency and a lack of grandstanding that anchors every moment.

She’s matched by a faultless, poignant Rod Mclachlan, who is gifted with a generous three scenes to expand Harold Wilson from an uncouth, absent-minded fanboy fumbling through an awkward evening of tea to the production’s strongest scene—a mirthful night at Balmoral, with both leaders letting their respective hair down—to his tragic acceptance of Alzheimer’s disease. In Morgan’s interpretation, Wilson was the Queen’s favorite P.M., and after watching their chemistry evolve so effortlessly onstage, it’s easy to see why.

The Audience only lags when the limitations of Morgan’s approach are exposed. The show’s concept is perhaps inevitably expository, and sometimes 15 minutes is not enough time to (re)-introduce an American audience to a forgotten British prime minister, survey his or her strengths and foibles in the long arc of history, and still entertain with emotions that universally transcend time and space. When there’s too much politics and not enough people, it founders. We wait nearly the entire show for Margaret Thatcher, and though Henny Russell embodies her steamroller efficiency without devolving into caricature, the scene never lands, even when the two powerful women lock ideological horns. It’s because policy—in this case, Thatcher’s support for South African apartheid—overshadows character, turning the meeting into a dry history lesson.

Ditto her conversation with Cameron (Peter Simon Hilton), when Morgan’s headline-ripped writing approaches preciousness (Cameron refers to Greece’s economic meltdown as a potential “Grexit”) aCory Pattack, Anne<undell, Wade Laboissonnikerend when the prime minister’s long-winded update on world affairs prompts the Queen to doze off in her seat. It’s a comic moment, of course, but it’s also indicative of a show occasionally in need of a defibrillator. Some in the audience will have, by this point, joined the Queen in her slumped posture.

Brave through the wonkier passages, and there is plenty of eccentricity in The Audience—the Queen sharing OCD quirks with fellow-sufferer Gordon Brown, or clucking like a chicken with Wilson at Balmoral, or enduring a grandchild’s prank on her confusing smartphone alongside Cameron. And even in the show’s saggier moments, you’ll relish the peerless elegance of the Maltz’s design team.

Cory Pattack’s immaculate lighting, including the chandelier’s mood-setting bulbs, highlights this resplendent masterstroke from scenic designer Anne Mundell. Costume designer Wade Laboissonniere ensures that the Queen’s panoply of dresses, which must have reached double digits, reflect her changing age, era and mindset, from simple black to bejeweled extravagance. Marty Mets composed the thrusting string music that accompanies the first appearances of some of Britian’s most-iconic P.M.s, and his other atmospheric aural touches are spot-on.