Satchmo At the Waldorf Reveals The Man Behind The Image 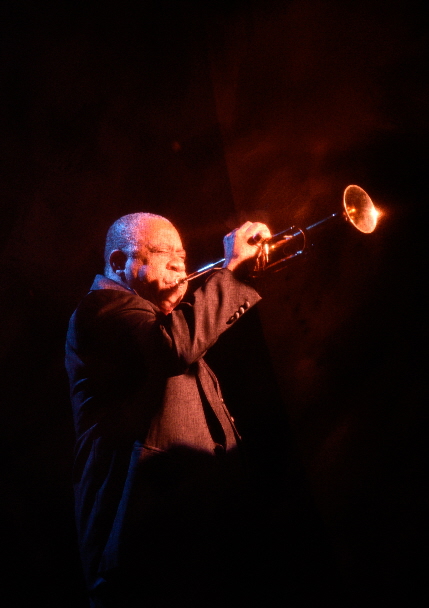 Even in this era of tell-all memoirs and talk show confessionals, we wonder who the real person is under a manufactured persona powered by practiced sound bites.

You yearn to hang with them in a bar away from spotlights and discover what they really think about who they are, what haunts them and sustains them.

Terry Teachout’s maiden play Satchmo at the Waldorf comes close to allowing that communion with the unvarnished, uncensored and complex human being beneath the sunny, grinning creation that the world adored as “Louie” Armstrong.

Barry Shabaka Henley’s appealing performance at Palm Beach Dramaworks as the proud, genial, troubled Louis (not Louie) quietly seduces the audience without any histrionics until late in the play. It’s as if Armstrong is sharing reveries with a new friend visiting backstage.

The 2013-14 play catches the 69-year-old Armstrong in his dressing room directly after what may be his last performance in 1971. Seriously ill, he warms to entertaining with time-shifting stories that document the evolution of pop music and its intersection with race relations from the 1920s through early 1970s.

Armstrong was known in his late career more as a mainstream entertainer crooning “Hello, Dolly!” and “What A Wonderful World.” But as any musician knows, his lasting contribution was inventing and popularizing huge portions of America’s singular contribution to world culture – jazz. And as social historians know, he was among the courageous African-Americans whose popularity with white audiences slowly battered away at segregated venues and hotels, even providing multiple races with unifying ground in the love of music.

During this one-actor evening, Armstrong’s reminiscences are interrupted with Henley’s convincing depictions of Armstrong’s longtime white Jewish manager from Chicago, the bluntly pragmatic Joe Glaser, and the young Turks of music, Miles Davis and Dizzy Gillespie, who admired his musicianship but decried what they viewed as pandering to white audiences.

Appropriate to the informal schmoozing, Armstrong gets out of his tuxedo, slips into a bathrobe and slippers, and finally into street clothes. Similarly laidback, the visit is laced with copious amounts of humor as well as locker room language and frank discussions of sex.

Dramaworks’ marketing wisely underscores that this is not a musical revue. There are snatches of the “West End Blues” that he plays back on a tape recorder, he quietly murmurs a Shabbos song he learned in his youth from a Jewish family (an especially touching moment in Henley and Teachout’s hands), he derisively croons a few lines from “Hello, Dolly!” which he had little respect for, there’s a New Orleans jazz funeral snatch of “A Closer Walk With Thee,” and his reveries are often accompanied by faint trumpet lines echoing in the deep recesses of his mind. But if you’re looking for a greatest hits evening, you are out of luck.

The kicker in Dramaworks’ production is that it marks the first professional at-bat as a director for Teachout, best known as the theater critic for The Wall Street Journal and author of an acclaimed biographies of artists like Armstrong.

There is not even a hint in this production that he lacks a track record. Teachout has absorbed lessons from watching hundreds of theater works, reading books on the subject and getting advice from three directors who have helmed other productions, which has had nine prior productions and has three more scheduled. Under Teachout’s hand, the 95 minutes move so smoothly both in pacing and staging as to be almost invisible.

In the New York production two years ago, Armstrong just lurched into his dressing room, destroyed by his efforts on stage. But in Teachout’s Dramaworks version, we first see an elegantly tuxedoed Armstrong through a scrim finishing off the last glorious licks of his Waldorf finale, the bell of his horn raised to the skies – an iconic image of vibrant energy. And then, pulling back the metaphorical curtain, Armstrong stumbles in, his entire body shaking from a hacking cough that forces him across the dressing room to a waiting bottle of oxygen that hisses with life-giving air.

Henley performed the part earlier this year in Chicago, but the approach was more imagistic and stylistic as if the play was set in some purgatory. So while the actor knew the lines, this is likely a far different performance.

Henley has worked hard to adopt a gravel quarry voice and shambling gait that disappears when he plays Glaser or Davis. But this is not a Las Vegas impersonation; he looks more like the aging Dizzy Gillespie and sounds a bit different than Armstrong. He wipes his forehead with a handkerchief, but that million-watt grin for the customers is absent. That is not a drawback. The goal is to catch the man beneath the image, and any attempt to mimeograph the icon would distract from that.

Three key elements are laced throughout. First is the relationship with the paternal and paternalistic Glaser who guided Armstrong’s career. Glaser was, to Armstrong, as close a friend as possible whom he trusted to run the business and who constantly pushed him to backpedal the esoteric jazz for the pop sound. When Glaser seemingly betrayed Armstrong at his death by leavening him nothing from their business partnership, Henley and Teachout depict the profound emotional maiming. Henley/Armstrong, who has been pretty good-natured throughout even when describing grievous racism, explodes for the first time.

The second element is the racism. There is the recitation of incident after incident in which Armstrong was not even allowed to eat in the same venues he played in. It’s not a new story anymore, related several times in such outings as Lady Day at Emerson’s Bar & Grill. But Henley is even more effective in exposing less dramatic woundings. Armstrong is not some naif about the hatred around him, but he is still surprised when colleagues like Bing Crosby credit him with teaching them everything they know about jazz, yet never invite him over for dinner.

The third successful element, and the one most elusive in most of these efforts, is Armstrong passionately describing his relationship with the music and performing it. Whether these are his words from interviews or Teachout’s well-informed imagining of them, they are a crystallization of an artist’s feelings. “What you hear coming out of a man’s horn… is what he is,” he says, trying to find words to express the connection.

What Henley makes quite credible is Armstrong’s genuine optimism when he says things like, “I’m just here in the cause of happiness” or maintaining his integrity smiling while playing the blues. He knows what he has accomplished and what he is worth. Still, he is saddened that the new generation of black music aficionados dismiss his amiable performances and moved on, leaving a primarily white audience.

The unsung hero is sound designer Matt Corey. It’s not just the subtle sound effects such as the air rushing out of the oxygen tank or the low rumbling when Armstrong slips deep into a mesmerizing reverie. It’s the use of music, the subtle then growing sound of a mournful trumpet as if being summoned from the recesses of Armstrong’s memory (actually some of it courtesy of local trumpeter Jim Hacker).

For those who saw the production in Los Angeles or New York with John Douglas Thompson, this edition has a slightly different vibe although it’s hard to pin down. Thompson’s Armstrong seemed so bone-weary that it was easy to believe that he would not be alive much longer. Henley’s Armstrong certainly is ill, but he is energized by someone to talk to, and Henley’s Glaser seems a much more inherently pragmatic businessman with even less concern when commerce trumps art.

Another difference is that earlier productions gave a sense that Armstrong was imitating Glaser and Davis as part of his narrative to his visitors. But Teachout and Henley make the monologues seem like stand-alone testimony of the actual characters talking to the audience on their own. This is especially true because Armstrong feels so unrelievedly betrayed by Glaser and yet we hear the manager reveal the extenuating circumstances behind the betrayal.

It’s well worth the chance to sit down and visit with the inner soul of a man who we thought we knew, but didn’t.

To read our review of the New York production, click here.