The sun never sets on the British Empire, the saying used to go. Well, it doesn’t set on Mamma Mia!, either. As you read this, no matter the time zone, country or phase of the moon, it’s playing somewhere, in this case an inarguably competent production at The Wick Theatre.

Even those of us who have never been a fan of the work have to admit that its score contains some infectiously upbeat tunes that spark Pavlovian responses of joyous clapping and swaying along in audience members, even if they’ve aren’t familiar with the ABBA “ouvre.” Certainly that was true of the senior audience at Saturday’s performance who were on their feet about 20 seconds into the curtain call’s megamix of Swedish pop hits.

The show approaching its 20th anniversary had been seen by more than 65 million people pre-pandemic, grossing $4 billion worldwide. It is so ubiquitous that there are actors, directors and musical directors who return to it again and again as a kind of annuity. 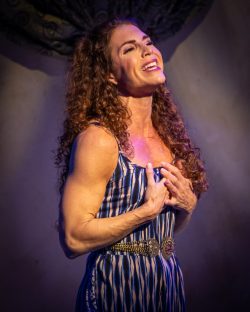 Indeed, the lead here, veteran pro Jodie Langel, played the role in 2020 at Actors’ Playhouse in Coral Gables and at another theater before that, investing her performance with a smooth confidence along with a 300-watt smile.

Most facets of this outing led by director Larry Raben, choreographer Stephen Casey and musical director Eden Marte (working with a digital soundtrack) are unassailably entertaining. But none are especially electric other than when the actors get to belt a blistering number like the emotion-soaked “The Winner Takes It All” that Langel uses to blow out the steel infrastructure of the auditorium.

For those who revere the quartet’s catalog, the perverse fun is seeing how bookwriter Catherine Johnson with original director Phyllida Lloyd managed to fit the songs into a story line or, far more likely, compose a story line around the songs. Sometimes the fit is defensible, sometimes it’s ludicrous. But the fitting itself is part of the intended fun.

Johnson and fans would likely object, but there isn’t much serious going on other than everyone trying to figure “who I am.” But there is a wry humor underlying these denizens of middle-age recalling their youthful antics and realizing that decisions made back then had far-reaching consequences. And then someone breaks into a song.

Unless you are one of the 27 people who have been living in Lower Slobovia, you know the plot (which some say was lifted from the Gina Lollobrigida movie Buono Sera, Mrs. Campbell but which the Mamma Mia folks deny.)

But for those 27 people: Donna Sheridan (Langel) is a 40-ish operator of a struggling taverna on a Greek island (aren’t the words Mamma Mia Italian?) She is the steadfastly independent single mother of the lovely and lively 20-year-old Sophie (Meg Frost) who is to be married the next day. Donna’s past includes leading a glam rock trio, Donna and the Dynamos with her buds Tanya (the ever dependable Aaron Bower) and Rosie (Britte Steele) who have arrived for the festivities. But no one knows who Sophie’s father is among a trio of Donna’s now estranged lovers (Doug Chitel as a former headbanger turned British banker, Robert Koutras as a broadly comic Australian travel writer, and Sean McDermott looking a bit like Roger Moore or Bill Pullman as the hunky American with a gorgeous voice.)  So Sophie invites all three in hopes of figuring out her parentage.

The jukebox score is comprised of 21 songs by the quartet, one of the most popular international pop groups circa 1972-1982. Some of the selections are not well known, but every one of their perky, peppy super-hits is present, all of them rearranged and funneled through the Broadway showtune genre.

The show is a regional theater favorite because it sells very well to Boomers and empty nesters suddenly with free time on their hands. When the production closed in New York in 2015, it was the ninth-longest running show in Broadway history. And we’ll forgive Sophie’s Choice Meryl Streep for taking the lead in the film version.

The actors and dancers never coast; some are Equity members. But the standout of the entire assemblage is Frost whose ice cream voice and innate charisma make her character the narrative spine driving the entire evening in this edition.

Costumes, of course, are the Wick’s specialty given its museum behind the stage. In this case, the de rigueur shimmery disco duds for the finale are equaled by an array of Greek gods and goddesses’ garb in the Act Two nightmare scene thanks to Jim Buff, Nikki Adams and Scott Poche.

The rented scenery is helped immensely by the pen and ink drawings of the seaside town and later of Paris as part of Joseiu Jean’s projections. Justin Thompson keeps the music balanced with the singer’s vocal levels.

For several years, the Wick has had a stable of returning directors, choreographers and other hands. But this piece – and likely throughout the season – this is a new cadre. Raben, Marte and Casey have been quoted as looking at the piece “with a fresh eye.” I’m not sure that comes across except that the sexual element in the script gets a welcome bit of a punch here. The dancers deliver more than their share of pulsating pelvic gyrations.

This is easily the fifth or sixth time I’ve seen this. So that may explain why, to be honest, while there is nothing wrong or awry with this unassailably capable production, I felt no magic at all.

Regardless, once again, the infectious Mamma Mia! is an inoffensive gentle smile of an evening guaranteed to have the audience on its feet.

Covid Protocol: Masks required inside lobby and auditorium. In fact, a couple who showed up without masks was reluctantly provided with them. Playbills are provided by using your phone to connect with posted web links on the wall. Food and drink available. 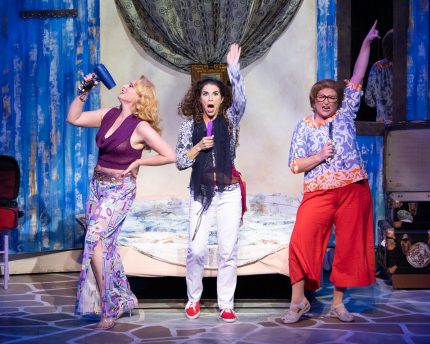 Aaron Bower, Jodie Langel and Britte Steele in the convent scene in The Sound of Music. Note Langel’s microphone.