Slow Burn’s Aida May Not Top Your Wish List, But The Pop Opera Burns Down The House 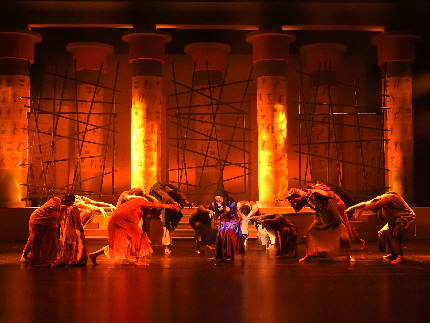 If American Idol produced a Broadway musical with choreography often found behind a diva in a stadium tour, the result would resemble Slow Burn Theatre Company’s production of Aida.

That’s not a criticism; it’s recognizing a choice that Slow Burn’s team enthusiastically made. It’s a compliment to the troupe’s infectious joy, technical virtuosity and overwhelming passion that the result is often entertaining and occasionally moving.

But the entire effort is unapologetically drenched in a late ‘90s pop sensibility that is by turns earnest and kitschy, insightful and shallow, deft and manipulative. To enjoy it, you have to give yourself over to a vision different not just from My Fair Lady, but from Spring Awakening.

For instance, there’s the gorgeous young lovers pulled right out of the trendiest SoBe nightclub earnestly blasting out a power ballad. Or the Sunday hymn of the c’mon-church-let’s-burn-down-the-house variety. Or pointedly anachronistic quips like a slave admiring a princess’ fabric, “I’ll say this for you Egyptians, your thread count is amazing.”

While Slow Burn’s choice of shows may not always be titles burning a hole in your I-need-to-see bucket list, the company makes nearly every production something to travel an extra county to see. In fact, as shown by Aida – not at the top of most people’s wish list – audience members will search their memories of the Broadway edition or the road show and say, “I don’t remember it being this good.” It underscores Slow Burn’s talent for adopting flawed material like an abused foster child and celebrating its strengths until it produces a success like this one.

The bones of Verdi’s classic tale of doomed star-crossed lovers is fleshed out with 21st Century Disney themes such as decrying racial prejudice, extolling ethnic pride and creating an independent heroine of intelligence whose sacrifice and example inspire superficial benighted one-percenters to become insightful compassionate human beings. Bookwriters Robert Falls, David Henry Hwang (M. Butterfly) and Linda Woolverton (Beauty and the Beast) have rewritten the script over and over in various productions from 1998 to 2005 to push those standard buttons marked “insert relevance.”

The raw material’s strengths are the lyrics by Tim Rice (Evita) and the score by Elton John who, as the legend goes, did most of his collaboration and alterations by fax machine. Their score, which begs to be warbled by Idol contestants, also encompasses faux African folk music, a bit of Bob Marley, some Aretha Franklin gospel, soulful anthems and blistering rock echoing The Who’s Tommy. You won’t be able to hum much of it on the drive home, but it will rush through you like churning white water while you’re in your seat. 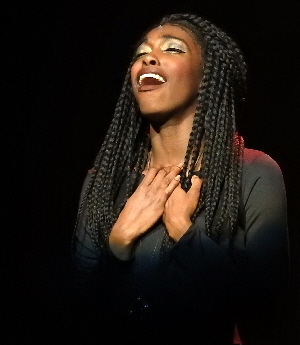 This production’s real virtue is the unswerving commitment from director/choreographer Patrick Fitzwater, his creative team and a cast with breathtaking voices, especially Khalifa White as the Nubian princess whose singing may remind you of Whitney Houston. Best of all, hallelujah, is the return from maternity leave of Amy Miller Brennan as the princess Amneris, a reminder, as if we needed one, that she is simply one of the best musical theater actresses out there, no asterisks or qualifications.

Their voices don’t just soar to the rafters like great winged things, they break free of the melodies with stunning loops and banking swerves designed not to show off their chops but to better illustrate the characters’ emotions. Brennan in particular enunciates words with a rare clarity even though she packs them with passion – the latter a quality she shares with White.

At the start of the story, Egyptian Captain Radames (a very 21st Century pony-tailed dude Stephen Millett) is returning from an expedition mapping the Upper Nile where his country is at war with the Nubians.  He has captured a group of their women, but one of them doesn’t act much like a slave. That’s because she’s Princess Aida hiding her royalty to avoid becoming a pawn in the war.

Radames is inordinately intrigued by this proud woman with such a sharp tongue and sharper mind. To fend off a growing attraction, he gives her to his betrothed of nine years, Amneris, a shallow privileged royal more interested in being fashion forward than in ongoing palace power struggles.

The self-possessed Aida, who exudes all that is noble in humanity, somehow bonds with the Egyptian woman who becomes unnerved by this exposure to a world she didn’t know or care to know existed.

Despite the imminent royal wedding, Aida and Radames inevitably begin a forbidden love affair to rival Romeo and Juliet’s. At the same time, the slave population clings to Aida as a symbol of their unlikely dream of freedom.

Any plans for the lovers to elope are dashed when Aida’s father is captured. She urges Radames to go ahead with the wedding as a diversion for her father’s escape – without explaining that reason to him nor that she is actually Nubian royalty.

No spoiler alert needed for fans of Florida Grand Opera: This doesn’t go according to plan and the lovers are eventually buried alive singing “There’s a place for us….” (okay, wrong musical). Amneris, who had to levy the death sentence but mercifully let them die together, has learned compassion and wisdom from her sisterhood lessons from Aida and “has been changed for good” (okay, another musical).

The narrative is not Aida’s point, so the book scenes do not demand much in the way of acting. That’s good, because other than the supremely talented Brennan and veteran Lawrence Buzzeo as a murderous scheming courtier, the rest of the cast isn’t ready to tackle Shakespeare.

You can excuse that because all of them pour emotions into their singing including Millett whose scorching duet with White “Elaborate Lives” could have been pulled off a Top 40 playlist. Similarly, Kendra Williams is a handmaiden whose palace job apparently is to add genuinely impressive melisma wails to augment the group numbers, especially in the glorious Act One closer, “The Gods Love Nubia.” 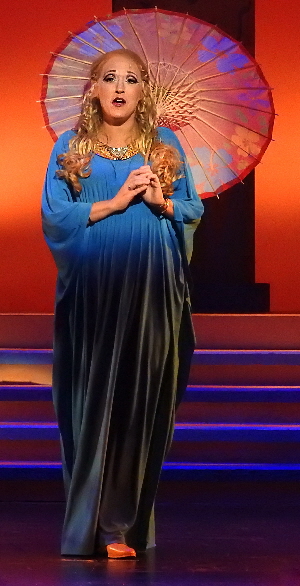 But Brennan is something else. She has proven herself an expert with a traditional Broadway sound in other shows, but now she reveals a facility for rock and pop. Hear her and her ladies summon up ’60 girl groups like Martha and the Vandellas in that fashion parade number, “My Strongest Suit.”

As an actress, she capably makes credible the sketched-in transformation from a cartoonishly style-obsessed Brahmin into a regal but compassionate human being with depth.

Everything you see and hear was molded and melded by director-choreographer Patrick Fitzwater and musical director Manny Schvartzman. But especially notable is Fitzwater’s choreography. He can evoke the vibe of the specific piece with African native dances as contorting bodies explode across the stage. But as in most Slow Burn musicals, his dancers almost always end up performing head on to the audience in a presentational manner, again as if they were backing Beyonce or Cher. There’s a lot of that here, but for once, it’s perfectly in sync with the pop vibe of the show.

Sean McClelland designed massive hieroglyphic-covered stone pillars to dominate the palace steps. But aside from dropped in lattices and rolled on furniture, the changes in location and mood is established by veteran lighting designer Thomas M. Shorrock. He creates changes the quality of light behind the columns to range from pastoral evening to a striated Popsicle sunset. While the 700 light cues (really, 700) were still a bit sloppy opening night, his effects included columns of light pouring straight down from the heavens through the darkness, capturing swirling smoke in a cone of illumination. (I’m trying to remember a Slow Burn show that did not involve filling the stage with atmospheric smoke).

Slow Burn’s resident costume designer Rick Pena has produced an array of evocative wardrobes including the script’s intentionally kitschy conceit of having Amneris and her courtiers strut a Project Runway-worthy parade of outré designs.

The evening contains a fair amount of flashing spears and stabbing knives, all of its overseen by fight director Lee Soroko.

The pop culture feel of manufactured entertainment can sometimes get a tad old. But that’s the piece. And Slow Burn executes it with enough style and panache to earn its standing ovation.

Aida presented by Slow Burn Theatre Company through May 7 at the Amaturo Theater, Broward Center For The Performing Arts, 201 SW 5th Ave., Fort Lauderdale. Performances are Thursday through Saturday at 7:30 p.m., and Sunday at 2 p.m. Running time about 2 hours 25 minutes including one intermission. Tickets are $47-$60. Call (954) 462-0222 for tickets, at www.browardcenter.org or #Ticketmaster.com; in person at Ticketmaster outlets or the Broward Center’s Auto Nation Box Office. Info at www.slowburntheatre.org 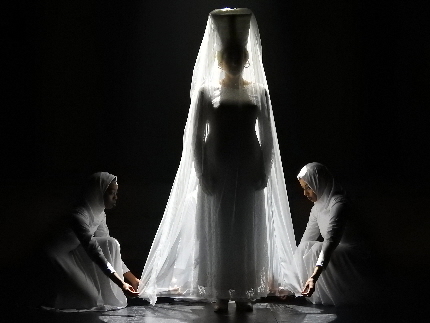 One Response to Slow Burn’s Aida May Not Top Your Wish List, But The Pop Opera Burns Down The House