Something In The Way They Sing: Rousing Beatles’ Imagine

Posted on February 8, 2018 by Bill Hirschman 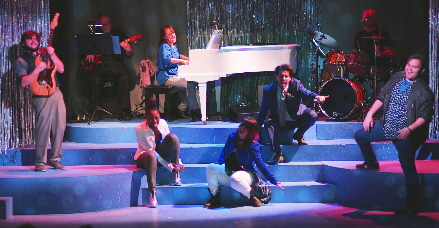 The oft-repeated legend from the ‘60s goes that a parent confronted their teenager grooving to the Beatles blaring from their bedroom stereo and asked rhetorically said, “Do you actually think that stuff will be around in your old age?”

So as validating as it is to hear Lennon-McCartney’s songbook wafting from Publix’s Muzak or backing a Las Vegas spectacular, it remains a bit weird to hear the rebellious soundtrack of our adolescence as raw material for the kind of songbook revue that Broward Stage Door is offering with Imagine – A Beatles Celebration in the same cabaret mode as it has presented Gershwin and Berlin.

But the discomfort aside from hearing a cast whose parents might have been in swaddling clothes when these songs were on the radio, it’s impossible to ignore that Imagine is an effective rebuke to that parent.

It’s not that the show tries to mimic the Beatles like a tribute band. It’s that conceiver/director/choreographer Kevin Black and musical director Ben Bagby, respect and highlight the emotional and musical worth that proves these songs are as timeless as those of Harold Arlen and Johnny Mercer.

The result is a warm energy-driven retrospective that keys in on the sentiments of a song and riffs off on it, sometimes coming close to the original sound, sometimes treating it as a jumping off point as if it were a Hoagy Carmichael standard, such as turning “I Want To Hold Your Hand” into a yearning ballad. They never feel like covers.

Black, Bagby and Stage Door have proven over the past couple of years that a solid corps of singers, competently staged and given fresh arrangements can deliver a thoroughly entertaining evening, and Imagine may be one of the best in its ever-escalating level of quality.

Imagine collects more than 50 Fab Four tunes – plus Lennon’s solo title number; it would take a Beatles-maniac to think off the cuff of any significant track missing from the songlist. As with previous Black creations, many songs are molded into a smooth but freight train fast medley. Most songs give a couple of verses to first one performer, then another as their colleagues provide a fulsome pulsating choral background before everyone joins in for the final stanza. Some can be a quiet hootenanny with everyone sitting on the floor; others are kick-butt ensemble numbers that have the audience clapping along like “Twist & Shout,” “Sgt. Pepper’s Lonely Hearts Club Band” and “Got To Get You Into My Life.”

Black also ensures that each of his sextet of singers gets at least half of a song to shine as a soloist—thereby proving that he also has an unerring ear for hiring young talents who inject their renditions with infectious enthusiasm or heartfelt passion.

This time, he has chosen Cameron Jordan, memorable in many Slow Burn Theatre Company shows; Charisse Shields, featured as Deena Jones in Stage Door’s recent Dreamgirls; Rio Peterson; Mario Castro; hometown Jordana Forrest, and a real find in the ball of fire Sarah Statler who gets a few solos to show off her lovely voice but who also plays piano on stage with a zest that powers the show forward.

Each gets a moment to show why they were hired: For instance, Forrest on “Daytripper;” Statler’s solo on her piano with “Fool on the Hill,” which slides into “The Long and Winding Road;” Shields on so many numbers but leading a prayerful soul-rousing gospel take on “Let It Be.”

But in recent years, Black and Bagby stumbled onto one exemplar that has become not just a hallmark but a justifiably anticipated facet of their shows. They (with Statler) orchestrate delicate a cappella charts of famous upbeat high-velocity tunes and then sculpt the voices of their cast into ineffably beautiful re-imaginings that highlight the emotion hidden in the lyrics. For instance, the group provide a vocal “string section” for “Eleanor Rigby” and a “Stomp”-like percussive background for “Come Together.”

Besides the voices, what propels Imagine past many other revues is the live on stage trio of Statler bouncing at the piano, Rupert Ziawinski on the quarry-solid bass and the nimble Roy Fantel on percussion, plus Peterson sparely used on electric guitar. Peterson and Jordan strumming acoustic guitars together on “While My Guitar Gently Weeps.”

No question that some people do not like the revue format to begin with and others simply can’t imagine hearing their Beatles performed in that manner by twenty-something kids. But for everyone else, Imagine is a tribute not to ephemeral AM radio hits, but to the lasting legacy of pure music that the Beatles gifted us with.