Posted on February 9, 2018 by Bill Hirschman

For decades, British playwright J. B. Priestley—once as big a name in theater and radio plays as Noel Coward and Terrence Rattigan – had nearly vanished from modern world stages because so many of his works were set in stuffy English drawing rooms.

But in 1992, the imaginative director Stephen Daldry revived the 1945 classic An Inspector Calls in London and then on Broadway in a stunningly stylized production in which the words themselves took a back seat to such visual tableaux as a tiny mansion collapsing amid a rainstorm.

Last fall, Roundabout revived Priestley’s Time and the Conways whose primary strength lay in an intriguing staging conceit of revolving sets that underscored time flitting back and forth between acts. Priestley occasionally indulged a bent for Twilight Zone-style social commentary.

But Maltz Jupiter Theatre’s current production of An Inspector Calls focuses with laser intent on what the evolving socialist Priestley saw as its thematic marrow — all individuals have an inescapable responsibility for the well-being of every other human being, and that privileged classes seem obscenely inured to that duty.

Such a sentiment has never lost relevance, but could it resonate any more loudly in these days of self-satisfied one percenters – and far less wealthy people fixated not just on their own prosperity, but to the exclusion of anyone else’s?

Am I my brother’s keeper? Is no man an island? Priestley’s Birling family, a well-to-do Yorkshire manufacturing dynasty in 1912, thinks not. They are insensible not just to the plight of those around them but uncaring how their actions might have consequences on those around them. Although they are two steps below the most elevated class, they see their enviable status as a kind of divine right.

In 2018, it takes considerable skill to keep their unbridled arrogance and tortured rationalizations from dipping into cartoonish caricature. But this superlative cast led by director J. Barry Lewis pulls it off with such skill that it all seems natural. This is no mean feat; in other hands, this would collapse into overheated melodrama.

To recap: Arthur and his doyenne wife Sybil are throwing a dinner party to celebrate the engagement of their beautiful daughter, Sheila, to the scion of a rival business family, Gerald. The party is also attended by the young son, Eric, who has joined the family business. They prattle about how there will be no war, how recent advances in automobiles and aeroplanes will enhance the world.

The celebration in the elegant dining room of their distinctly upper-crust manse is interrupted by the appearance of police Inspector Goole, a tall broad shouldered man who may dress in tweedy clothes but is unintimidated, in fact, is intimidating himself. He is investigating the horribly painful suicide a few hours earlier of a working class woman.

He believes that someone in the house has a connection with her. At the risk of a spoiler, the crucial thematic metaphor is that everybody in the house knew her from unconnected aspects of their lives. While the coincidence is unlikely in real life, this is part of Priestley’s theatrical conceit. You have to go with it. Like a cowboy in an Oklahoma cornfield breaking into song.

Goole’s unrelenting interrogations force out confessions in which it becomes clear that every one of them contributed to the woman’s downfall and death. The cut-glass family gathering devolves into a melee leaving everyone on the floor devastated by the realization of their culpability.

But the show is not over (although the opening night audience twice started to applaud because they thought it was). Priestley, whose optimism about humanity was crushed during World War I, has two more sword thrusts left in a lengthy coda.

Those who saw the Daldry production might fear that expensive visuals are essential to the script’s success in this century. Daldry’s production almost buried the meat of the play under the admittedly amazing spectacle.

Lewis’ vision is distinctly different. To begin with, Daldry’s inspector seemed from the outset to be a faintly otherworldly visitor who maintained a silently damning equanimity in a God-like disapproving way through most of the play. In the original 1945 production, the part was played by a middle-aged unassuming-looking Ralph Richardson. Here, Lewis – a master of pacing — has his inspector starts off as righteously judgmental and quickly stokes his anger which grows and grows until this supposed civil servant quickly rages like an unleashed avenger.

We never find out exactly who Goole is (although it will make for a fine argument in the car ride home) but one bet is that he’s a cross between Gabriel and Jeremiah. As the daughter persistently insists after the second-to-final twist, it doesn’t matter. The truths remain true about the family’s guilt that he has exposed.

Lewis adds many grace notes: the stoicism of servants who observe with the silence of a sphinx. Or when Sheila and Gerald feel the urge to dance and glide outside to the veranda where it’s raining, unbidden servants are required to come out in the downpour and hold umbrellas over the couple’s uncaring heads.

Everyone breaks the fourth wall to explain their rationalized motivations to us. But the most effective and certainly most courageous example at the Maltz is when the inspector comes forward to admonish everyone in the audience on their responsibility – and the house lights rise to illuminate patrons heavily representative of the very people depicted on stage.

Lewis and his designers also provide wonderful coups de theatre that are not as ornate as Daldry’s but just as effective, especially the final reveal in the evening.

The one facet that Lewis’ team copied from Daldry is to stage the first ten minutes of the play, the elegant dinner scene before the inspector arrives, behind large obscuring windows. This makes the audience feel like they are prole outsiders looking in on these Brahmins disconnected from the prosaic world they care nothing for. It’s a valid artistic choice. But patrons not familiar with the play will be frustrated at the impeded visuals and wondering if they will spend the entire play unable to get a good look at faces (although the sound is pristine). It was worse in the Daldry vision in which the people were crammed into a closed up dollhouse at the back of the stage. Only when the inspector arrives do the windows fly away.

Lewis is one the region’s finest directors whose invisible but assured staging is equaled to the convincing performances that he gets from his actors.

And he has hand-picked a devastating cast. Top of the list is Rob Donohoe adding yet another distinctly different characterization to the many he has provided Palm Beach Dramaworks. His callous arrogant Arthur sporting a C. Aubrey Smith moustache is certain of the rightness of his well-ordered world and his place in it that brooks no challenge. Everyone in the cast has unassailable accents thanks to Jennifer Burke’s coaching. But Donohoe’s upper crust speech is sprinkled with coarse vowels unique to the Yorkshire he inhabits. For instance, he says “coombs” instead of “comes.”

Angie Radosh, such a kind soul off stage, is an expert at inhabiting entitled near royalty who could make Maggie Smith’s Dowager feel like brown shoes at the ball. Radosh embodies the imperious Sybil who finds that common folks’ impertinence is an intrusive unforgivable sin.

Jeremy Webb’s Gerald convincingly brings just that extra bit of snobbery that indicates that his family is a cut above the Birlings. Cliff Burgess perfectly communicates the callow dissolute Eric who becomes paralyzed with self-disgust. Beth Dimon leads the pack of servants providing the slightest hint of disapproval. Charlotte Bydwell conquers the tough part as the only Birling to learn anything from the ordeal with an awakened conscience and who spends much of the play shocked that no one else will acknowledge what is occurring and what has occurred.

James Andreassi, one of the brothers in Dramaworks’ recent The Little Foxes, does a plausible job playing a detective not likely found on Law & Order. He’s a much more forceful presence that previous actors. It’s a choice the production made that you can debate whether it’s too blunt.

As always, as always, the Maltz has some of the best production values in the state – imaginative and evocative. Victor A. Becker’s set is tasteful, Kirk Bookman’s lighting accentuates the changing moods, and Tracy Dorman has cobbled together costumes from various sources and supervised the building of others.

But especially notable is Marty Mets’ sound and music, which includes unearthly piano shrieks played over ominous rumblings on a cello.  Again, some of it may seem almost melodramatic but they are so effective that you don’t doubt them.

Every year, the Maltz inserts one straight play that is pointedly different than the rest of its season (this one is bookended by Hairspray and South Pacific). With a shorter run, they often sell out. But most of them like Disgraced and Glengarry Glen Ross show their commitment to thrilling theater. An Inspector Calls rightfully joins that roster.

An Inspector Calls runs through Feb. 18 at the Maltz Jupiter Theatre, 1001 E. Indiantown Road. Show times are 7:30 p.m. Wednesday to Friday, with 2 p.m. matinees Wednesday, Friday and Sunday. Tickets from $58. Show time is 96 minutes with no intermission. Call (561) 575-2223 or visit jupitertheatre.org. Tickets reportedly are sold out although check with the box office for returns. 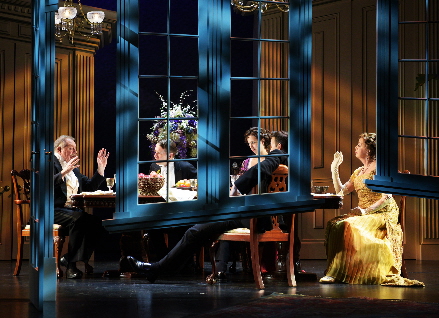