Posted on November 7, 2021 by Bill Hirschman 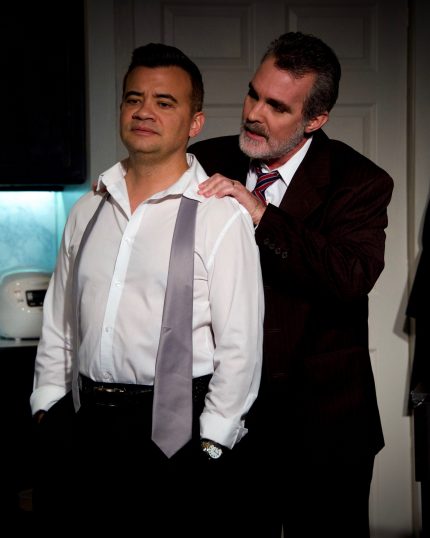 Reading today’s headlines about corruption – whether it’s a new politician seduced into the quagmire, or the machinations of an experienced operative, or an ordinary citizen drawn into the morass – you wonder not so much the why of weakness for the lure of power, but the process of how it happens.

Kenneth Lin’s 2014 Warrior Class, enjoying an incisive production at the rechristened Boca Stage company, is an inside depiction of human beings, not monsters, slipping inside this web of compromise, pragmatism and fading conscience.

Director Genie Croft has steadily molded this tale of people who we ought to abhor, and eventually do disapprove of, but who we cannot quite hate. It helps that Lin has created initially appealing characters whose complex pasts, true intentions and fallibility are exposed layer by layer.

Warrior Class centers on Julius Weishan Lee, a New York assemblyman who’s been dubbed “The Republican Obama.” Lee is the son of Chinese immigrants and a decorated war veteran with a promising political future. But Holly Eames, a girlfriend from college 20 years earlier, knows the career-crippling details of how their relationship imploded. So the skilled political fixer Nathan Berkshire is called upon to keep the past in the past.

Their complexity is embodied in the convincing shaded performances of Paul Wong as Lee, Jacqueline Laggy as the suburban housewife, and, in one of the best performances we’ve seen from him, Wayne LeGette as the genial, adept yet venal handler who would give Roger Stone a run for his contaminated money.

It should be no surprise that we are watching a spiraling down into the swamp, but it’s watching the step by step as each disappearing veneer reveals unexpected acceptance or even willingness for blackmail, extortion, bribery and sacrifice of genuinely-held ideals.

Croft and LeGette especially drive this tale steadily, even through the opening of most scenes in which characters engage in small talk trying to diplomatically ease into the real topic, yet with tension and apprehension seeping out from below their surface.

While Nathan long ago jettisoned any sense of principles, watching the other two sink into the mire makes you wonder if Lin thinks the susceptibility to such temptation is inbred and universal.

Lin’s script also asks directly asks questions for the audience to argue about on the way home: Can people change, should we be held accountable in middle age for the sins of our youth, are victims justified in using any tactic to seek justice or even revenge?  At one point, Julius resisting a slimy deal says, “I get my life together and I can’t spend my life in someone’s pocket,”

LeGette, a veteran of South Florida theater plays and musicals, is dead perfect and deadly. Peering over reading glasses, his distinguished martini-smooth Nathan can be convincingly charming, intense, threatening, foul-mouthed, angst-ridden and coldly nasty all on the twirl of a heel when the situation calls for it — in his mind.

The Nathan that he, Croft and Lin create is also the smartest person in this room or most others, with plans beneath plans beneath plans and an encyclopedia of ploys to advance all of them. What is fascinating is that under the pleasant even pragmatic veneer, we can see LeGette’s Nathan is so far gone that the “game” is not about winning anymore for him, (let alone doing good). It just is. The game becomes its own reason for its existence. And LeGette shows that down deep, Nathan has some awareness of that existential meaninglessness.

Wong has the least showy role, but he credibly charts the descent of a man who believes he is a straight-ahead, straight arrow with morals, ethics and a desire to serve the public – willing to sidestep a politically advantageous committee appointment on the wrong side of an issue he cares about. But as we find darker aspects in him as well as his self-delusion about them, we watch him being drawn inexorably into places Nathan has engineered that Julius never dreamed he would end up.

Laggy, also a justifiably lauded veteran of this company’s productions, deftly conquers the toughest role – the girlfriend who can be seen as Julius’ victim, but who wants reparations for a disappointing life that has been dealt bad hands. Smart, canny, no pushover but hardly pure herself, Laggy’s Holly is flawed. At one point, she explodes, “I don’t think you’re fit for public office.” But she is willing to make a deal, one she doesn’t expect to fill the emptiness in her life.

The accomplishment is that all three make these complex people believable.

The set of a well-appointed apartment and a wood-paneled chophouse, and the smoothly laid in sound are solid. But a nod is due Jerry Sturdefant and Alberto Arroyo for character-perfect costumes with small touches like the flag on Julius’ lapel, the monogram on the sleeves of Nathan’s shirt and the carefully coordinated handkerchief with Julius’ tie.

The previously scheduled play actually closes the 2019-2020 season for the company then known as Primal Forces, a company that has specialized in small-scale dramas and comedies most theatergoers have not heard of, but have been reliably thought-provoking and rewarding.

This entry is not especially thrilling – this is all-too-familiar territory — but it certain qualifies as a chilling tale more horrifying than any horror movie.