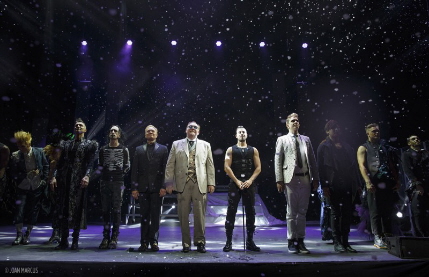 Any of us Boomers who earned pocket money as teenagers performing magic for children’s parties can tell you, the secret of magic is not “how did he do it” but how it was done.

While none of us would-be Houdinis could execute the stunning elegant slight-of-hand card work exhibited by Yu Ho-Jin at The Illusionists – Live From Broadway, I probably have at the bottom of my closet my own vanishing egg bag equipment like Jeff Hobson used opening night at the Arsht Center.

The difference was the enthusiastic showmanship, inspired flair, well-polished humor and unbridled inventiveness that Hobson imbued in this hoary old standby. That was true of all seven of these diverse magicians who brought a modern spin to this array of classic prestidigitation. The results amazed much of the audience from the tiny girl brought up to watch Kevin James make a paper flower dance in the air to the mother whom Colin Cloud seemed to enable to read his mind.

Effectively cloaked in high-tech flourishes from pounding music to a rock concert-worthy light show plus classic theatrical accoutrements like dancers, The Illusionists gathered this motley crue of accomplished conjurers whose mein ranged from Liberace to Marilyn Manson, with effects ranging from benignly turning a scarf into pack of cards to grossly pressing an audience member’s borrowed quarter into the magician’s eye and having it emerge from a bloody cut in his arm.

The most brilliant stroke was a large high-def LED screen at the top of the stage. This enabled them to perform close-up sleight–of-hand that previously had been exiled to small venues and nightclubs. People in the balconies told me that they could fully appreciate the show because of the screen.

A major beneficiary was Yu Ho-Jim, a native of South Korea named the 2014 Magician of the Year by the Academy of Magical Arts and who won the Grand Prix at the Fédération Internationale des Sociétés Magiques,

With an endless supply of cards appearing from nowhere, he unreeled a procession of transformations with a studied smoothness and honed skill that transcended whatever mechanics that actually powered the tricks. In two moments we’ve not seen before, half of a torn card regenerated its other half and became whole; in another, a blank card restored its pips, both before your eyes – effects you would have sworn required CGI.

Ben Blaque “The Weapons Master” (everyone had a nom du stage), who looked like he had just got off a Harley, shot a mean-looking crossbow across the stage at a lovely assistant holding various items, and finished by setting off a chain reaction of shots that pierced an apple atop his own head. You might or might not guess how some of this was achieved without going through lovely assistants every couple of weeks, but you see the shaft (or think you do) zooming across the stage.

Hobson (The Trickster) serves as a genial emcee with an intended and pronounced gay persona (although he is married to the show’s female costume designer who gives him rhinestone-covered tuxedo and shoes Dorothy Gale would envy). His years performing in Las Vegas are evident as he works in and around the audience, notably pulling off a stunt we don’t want to spoil.

Dan Sperry (The Anti-Conjurer) looks like a cross between Riff Raff and Heath Ledger’s The Joker, but he also has an engagingly demented persona (even if his speech was a bit hard to understand sometimes). His second act turn involving appearing doves has been, again, a standard of stage magic for a century, but he does it with such skill and verve – and a few twists you haven’t seen before— that the audience was captivated.

All of them are accomplished at captivating patter and working with many audience members dragooned into coming on stage, especially Andrew Basso (The Escapologist) who is limited to a funny bit of escaping with his wrists tied while flanked by volunteers. But his publicity indicates that he recreates Houdini’s water torture masterpiece without obscuring curtains, which he didn’t do. Perhaps he had a cold or the equipment broke down.

James (The Inventor, a portly professorial type wearing blue tinted glasses) accidentally chainsaws an operating room tech in half in one scene and creates a Frankenstein/Charlie Chaplin in another, yet executes a lovely little ballet of wadded-up paper coming alive in the palm of his hand.

Cloud (The Deductionist) is a Dunninger-style mind reader of the 40s with a Dr. Who vibe of the 80s and an infectious sense of fun.

Even with all the flash and glitter, the production is less Cirque du Soleil than you expect, but it is well-staged by Neil Dorward who alternates spectacle and intimate numbers, although the last encore is a bit of a letdown no matter how technically hard it might have been.

Some context: From the late 1800s to the early 1960s, magicians flourished in massive stage shows with then state of the art technology, vaudeville, television variety shows, nightclubs, even on radio (the aforementioned Dunninger).

But film increasingly stole the sense of wonder at the seemingly impossible due to the revelations that everything was a trick, a special effect that youngsters remain eager today to look behind the curtain to suss out. The suspension of disbelief so crucial in any theatrical production was increasingly difficult to engender and sustain with a magic act.

Then as digital technology ramped up, the sheer scope of cinematic illusions became so vast that it dwarfed anything you could see on stage. Magic began to fall out of favor other than throwback aberrations like David Copperfield who was awash in showmanship and Doug Henning who surrounded his feats with storytelling.

But the allure of magic hung on, especially in Las Vegas with people like Penn and Teller or in nightclubs like Ricky Jay, all of whom made appearances on talk shows and cable specials. Then came the weird permutation of traitors who fronted television shows exposing how tricks were done. Broadway, which has always relied on magical stagecraft, played its part transforming Beauty’s Beast and transmogrified Cinderella’s rags into a ball gown before your eyes. The 2013 film Now You See Me about a similar group as the Illusionists was popular enough to spawn a sequel this year.

The producers of this show being hosted by Broadway Across Miami realized that that really well-produced magic can continue to be enthralling when it’s live on stage, not on TV or film. The company has a second tour of magicians pretending to be from the turn of the century.

Now you can argue, certainly we will, that this is hardly theater such as Hairspray or Hedda Gabler. But it is a spectacular experience. With the boundaries of what is considered theater evaporating into multi-disciplinary productions of performance art and non-traditional storytelling, The Illusionists is well worth the visit. But frankly, I’d rather they had brought the tour of Fun Home down here.

The Illusionists runs through Oct. 16 as part of the Broadway Across America-Miami series at the Adrienne Arsht Center for the Performing Arts, 1300 Biscayne Blvd. Performances 8 p.m. Wednesday-Saturday; 2 p.m. Saturday, 1 p.m. and 7 p.m. Sunday. Runs 2 hours including one intermission. Tickets $27-$109. Call (305) 949-6722 or visit http://www.arshtcenter.org/

This entry was posted in Performances, Reviews and tagged Adrienne Arsht Center, Broadway Across Miami, The Illusionists. Bookmark the permalink.