The Kids Attending The School of Rock Kick Out The Jams 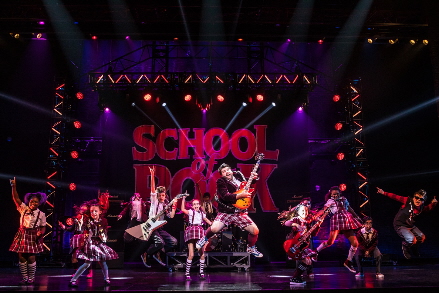 For a show whose strengths are its celebration of nose-thumbing non-conformity and anarchic scenes of unrestrained thrash metal music, School of Rock is a surprisingly conventional musical that mechanically ticks off all the check marks in theater’s dramaturgical by-the-numbers playbook.

The Broadway Across America tour at the Broward Center is undeniably entertaining although not as rousing as it was in New York. It’s close to impossible not to be cheering as talented elementary school-age children expertly kick out infectious raw edged rock music – albeit written and orchestrated by Phantom of the Opera’s Andrew Lloyd Webber.

It’s based on the 2003 hit film written by Mike White and starring the inimitable Jack Black as the arrested development slacker Dewey Finn.

In this version, the undisciplined aimless guitarist is kicked out his own flailing garage band No Vacancy which, like he, is musically stuck in the 1980s. Dewey crashes with Ned, his former bandmate from the good old days who is building a teaching career. When Ned’s wife threatens to eject the freeloader if he doesn’t pay rent, Dewey steals Ned’s letter hiring him to teach music at the kind of regimented private prep school that requires uniforms and which decorates its oak-paneled halls with decades of awards.

But they are all preternaturally gifted and Dewey proposes forming them into his entry in the upcoming Battle of the Bands. Among his obstacles is the lovely but primly proper principal Rosalie.

Webber, a longtime rock fan, decided to turn the flick into a musical with bookwriter Julian Fellowes (creator of Downton Abbey and the musical Mary Poppins) with lyrics by Glenn Slater (Sister Act and The Little Mermaid). The acclaimed composer and director Laurence Connor who helmed the recent reboot tour of Phantom made one particularly wise decision: The lead actor would not try to do a Jack Black impersonation.

While the basic character would remain a schlubby underperforming overaged rambunctious ne’er-do-well, the musical’s Dewey would have his own riff. That worked, bringing Alex Brightman a Tony nomination in 2016 and a tradition maintained to this day on Broadway by subsequent replacements.

Webber added 14 original songs plus saved three from the film’s greatest hits soundtrack. They amped up the personal stories of the kids whose parents aren’t listening to their individuality and their artistic souls. Dewey and strait-laced principal (but former Stevie Nicks devotee) Rosalie inexplicably have a burgeoning fire-and-water romance.

The kids in the band with their volcanic riffs and boundless bounding energy are essential to the show’s success and this tour certainly has them in its large cast including vocalist Gianna Harris, keyboardist Theo Mitchell-Penser, percussionist Gilberto Noretti-Hamilton, bassist Theodora Silverman and blazing lead guitarist Phoenix Schuman.

The problem is Rob Colletti as Dewey. He projects the right lovable loser personality with well-chosen comic echoes of Black, Blues Brothers Belushi and Ackroyd, Bill Murray and a host of others. This experienced actor who has worked on Broadway’s The Book of Mormon deserves kudos for laboring very hard and earnestly. But the bottom line, unfair as it might be, is that he needs that God-given something extra to be the driving force of this show. Further, Colletti does not convincingly depict how Dewey’s feeling for the kids goes from pure self-interest to avowed caring for the children. It just arrives full-blown in the final scenes.

And then there is that musical comedy setting. Webber and Fellowes know what works on stage. But what they have wrought is like trying to fuse American Idiot with My Fair Lady – the sensibilities are just irreconcilable. So the kids leap and cavort in the song “Stick It To The Man,” but then Dewey and Rosalie have classic I-want-style ballads of personal anguish.

Webber’s music is an obvious joyous release and the lyrics are so-so, which you won’t notice because once again (like Matilda) enunciation is not high on anyone’s priority list.

Despite all those caveats, believe it or not, School of Rock is a crowd-pleasing hoot.

This entry was posted in Performances, Reviews and tagged Andrew Lloyd Webber, Broadway Across America, Broward Center for the Performing Arts, School of Rock. Bookmark the permalink.